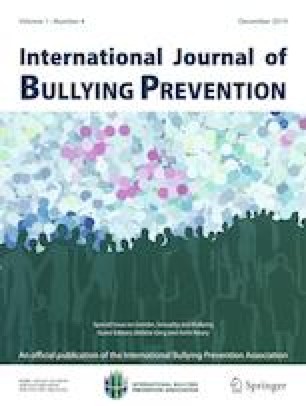 Bystanders to Bullying: An Introduction to the Special Issue

Researchers worldwide have investigated the phenomenon of bullying, which has been defined as aggressive, goal-oriented behaviour which harms another individual within the context of a power imbalance (Volk et al. 2014). With the rising of new technologies, bullying has been observed also in the online context. Cyberbullying is defined as “willful and repeated harm inflicted through computers, cell phones, and other electronic devices” (Hinduja and Patchin 2015; page 11). Bullying and cyberbullying are a cause of concern not only at school but also in other institutional contexts (e.g., College; workplace) (Bartlett and Bartlett 2011; Varghese and Pistole 2017). The forms and dynamics that these negative behaviours take in various settings are relatively similar (Monks et al. 2009).

The behaviour of passive bystanders has also been suggested to reinforce bullying (Kärnä et al. 2011). This is mainly because bystanders’ passive behaviour can signal a silent assent to the perpetrators. Workplace bullying research has also recognised the role of bystanders as integral rather than incidental to the bullying episodes, and has shown that the bystander typologies are relatively similar to the ones identified in the school bullying research. More specifically, bystanders may take side with the target or with the perpetrator, and can even take multiple roles (Paull et al. 2012). The presence of bystander is widespread both at school and in the workplace. Naturalistic observation of bullying at school showed that bystanders are present in 88% of bullying episodes, but they intervene in 19% of them (Lynn Hawkins et al. 2001). In the workplace, up to 30% of employees have experienced witnessing bullying (Ólafsson and Jóhannsdóttir 2004). High peer acceptance of passive bystander behaviour has been found also in the online context (i.e., about 76% of youngsters had been bystanders at least once) (Vandebosch and van Cleemput 2009).

Different variables seem to affect bystander behaviour. For instance, the presence of many bystanders—compared with the presence of a few bystanders—attenuates their sense of responsibility, and in turn actually discourages bystander intervention (Obermaier et al. 2016). In line with the model of bystander intervention (Latané and Darley 1970), bystanders are more willing to intervene when they perceive the incident as serious, when they interpret the situation as an emergency, and when there are no other onlookers. Importantly, being exposed to bullying can have serious implications on the mental health of bystanders (Rivers et al. 2009), which is one of the reasons why bystanders should be supported and equipped to recognise and tackle bullying.

Overall, research on bystanders of bullying in different contexts has considerably increased in recent years; however, many issues need to be clarified. For instance, our knowledge of the different strategies that bystanders adopt to support the target is still limited. In addition, research investigating simultaneously individual and contextual factors linked to bystander behaviour is lacking. Moreover, literature has shown that combining physiological and self-report measures might constitute a new avenue to understand bystander behaviour (Barhight et al. 2013); however, studies combining both methods are lacking. Finally, researchers need to gain a deeper understanding of the evidence-based strategies that positively affect bystander behaviour in different bullying contexts.

Moving on from these reflections, the contributions in this special issue have the common goal to shed light on bystander behaviour in various contexts (e.g., school; College, workplace; cyberspace). Overall, the six contributions bring new knowledge to the field, and offer useful insights for future research.

In order to shed light on the different types of cyber-defending behaviours, the contribution by Moxey and Bussey (2019) in this special issue, presents a questionnaire measuring different forms of defending, which was administered to a sample of ethnically diverse Australian adolescents. Coherently with the aforementioned line of research, this study) shows that defending behaviour is a multidimensional construct, as defenders can employ constructive strategies, such as consoling the target of cyberbullying, or destructive strategies, such as threatening the perpetrator. The study shows that aggressive cyber-defenders are also likely to be cyber-perpetrators. Interestingly, the authors found an association between aggressive cyber-defending and moral disengagement, showing the importance to address socio-moral aspects in future anti-bullying programming.

The important role of empathy in fostering positive bystander behaviours is outlined in the contribution by Rudnicki et al. (2019). The authors of this study investigate celebrity bashing, which is a specific form of online aggressive behaviour involving derogatory messages towards celebrities. The study combines physiological and self-report measures, and investigates the role of the neurophysiological substrate of empathy (i.e., the oxytocinergic system) in affecting bystanders’ response to online celebrity bashing. The authors found that intranasal oxytocin administration reduces bystanders’ self-reported acceptance of online celebrity bashing. The study shows that combining self-report and physiological measures could give an important insight into bystander responses to negative behaviours online. One of the main methodological strengths in this study is the adoption of a non-invasive and objective measure in assessing the neurophysiological correlates of bystander behaviour.

How to Increase Active Bystander Behaviour?

Successful intervention programs have shown that in order to foster positive bystander behaviour, students need to (a) increase their awareness of bullying, (b) learn new skills to act in appropriate ways in bullying situations, and (c) be encouraged to make use of their knowledge and skills in real-life situations (Kärnä et al. 2011).

The contribution by Doane et al. (2019) in this special issue, builds its rationale around the importance of increasing bystanders’ awareness about the positive responses to cyberbullying incidents. More specifically, the authors of this study explored the effect of a video providing suggestions on positive responses to cyberbullying incidents, on college students’ intentions to help. The findings show that students in the experimental group are more willing to help immediately after the video, compared with students in the control group. Students in the experimental group report higher scores on intentions to help at one-month follow-up, though the differences between the two groups are non-significant. Overall, the study shows that participating in an informative session about positive bystander behaviour can have a positive impact in the very short-term. However, the findings indicate that being exposed to the intervention in a single session might not have a long-term impact on bystander behaviour. Based on these findings, future intervention programs should be more intense and systematic.

Employing a similar methodology, the study by Dal Cason et al. (2020) in this special issue, adopted video-vignettes depicting workplace bullying episodes with a sample of college students. The authors tested the hypothesis of a positive association between bystander intervention in support of the target of bullying, and moral courage (operationalised as “acting correctly in the face of popular opposition, shame, scandal or discouragement”). Findings show that moral courage fostered bystander intervention in situations of workplace bullying, especially among participants who showed high levels of personal involvement (i.e., willingness to help the target) and engagement with the video-vignettes. The study can be included in the line of research that addresses morality to empower bystanders against bullying. Workplace bullying literature has started only recently to look at bystanders and to recognise their role in the bullying dynamics. Therefore, this work is an important contribution to the workplace bullying literature.

The last contribution included in this special issue presents the evaluation findings of an anti-bullying intervention program aimed at empowering bystanders to tackle bullying. As outlined in a previous literature review (Sivaraman et al. 2019), there is a need for more rigorously evaluated anti-bullying intervention programs in low-income countries. The contribution by Arënliu et al. (2019) meets this need by evaluating, through a rigorous methodology, a short and ultra-short version of the Viennese Social Competence Program (ViSC), in a low-income country (i.e., Kosovo). The ViSC program aims at empowering adolescents to recognise bullying, and to intervene in bullying situations, and it has been shown to be effective in reducing victimisation with students in a high-income country such as Austria (Yanagida et al. 2019).

Importantly, previous evaluations of anti-bullying programs in middle- and low-income countries have shown no effect on the reduction of bullying and victimisation (Sivaraman et al. 2019). Therefore, findings of this study contribute to the extant literature in that they show that an ultra-short intervention program can, to some extent, reduce victimisation, in spite of the limited resources.

By acknowledging the important role that bystanders cover in bullying situations, the contributions in this special issue aimed at investigating bystander behaviour in various contexts (i.e., school; cyberspace; college; workplace). Overall, this special issue expands our knowledge and provide useful insights for evidence-based intervention programs. The work by Moxey and Bussey (2019) show that cyber-defending can take different forms, among which aggressive responses. Two contributions included in this special issue consistently show the key role of empathy in enhancing positive bystander behaviour in online bullying (Rudnicki et al. 2019) and restraining from pro-bullying behaviours (Schultze-Krumbholz et al. 2019). The contribution by Doane et al. (2019) outlines the importance of educating bystanders about the importance of supporting the target of bullying, whereas the study by Dal Cason et al. (2020) shows the role of moral courage to foster positive bystander behaviour. Finally, the study by Arënliu et al. (2019) highlights the usefulness of adapting anti-bullying intervention programs to low-income countries.

Taken together, the six contributions provide several insights into bystander behaviour and are inspirational for future research in the field. Some important messages can be drawn based on the findings of the contributions included in this special issue. First, researchers need to take a multidimensional approach when investigating defending behaviour. Hence, the instruments currently adopted to detect defending should be revised in order to include items assessing constructive and destructive forms of defending. This could, in turn, contribute to elucidate the dynamics of offline and online bullying, and could help to design intervention programs aimed at fostering constructive bystander behaviour.

Second, this special issue shows that combining neuroscience techniques with instruments adopted in the field of Social Sciences might greatly contribute to cyberbullying prevention and response. Future research might adopt such methodological innovation to explore various issues in connection with bystander behaviour of online and offline bullying.

Third, based on the contributions of this special issue, positive bystander behaviour is closely linked with moral variables (e.g., empathy; moral courage), which implies that prevention and intervention programs should include a socio-moral component. The possibility of including such a component can greatly help in tackling bullying, as fostering moral actions can act as a deterrent for various forms of aggression, including bullying. This indication is in line with the outcomes of intervention programs which aim primarily at fostering students’ socio-cognitive abilities (i.e., ViSC program), and that have been shown in turn to empower bystanders to do something about the bullying they witness.

I wish to express my gratitude to the Editors-in-Chief of the International Journal of Bullying Prevention, James O’Higgins Norman and Sameer Hinduja, for their kind invitation to serve as a Guest Editor for this special issue. I am very grateful to the Managing Editor, Mairéad Foody, for her help throughout the process of creating this special issue, and for her efforts in handling the peer review process. Many thanks to (in alphabetic order) Tijana Milosevic, Aikaterini Sargioti, and Robert Slonje, for reading an earlier draft of this editorial and providing their useful feedback. Finally, thank you to the researchers who contributed to this special issue.