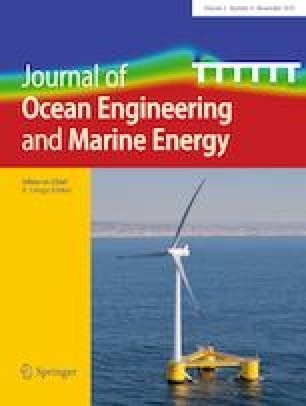 This article provides some statistical features of the sea surface roughness given as a function of the spectral wave steepness and the significant wave height suggested by Taylor and Yelland (J Phys Oceanogr 31:572–590, 2001), which is best to use for mixed wind sea and swell, and for swell-dominated situations (Drennan et al., J Phys Oceanogr 35:835–848, 2005). Results are obtained using the Myrhaug and Fouques (2008) bivariate statistics of the spectral wave steepness and the significant wave height representing wind sea, swell, and combined wind sea and swell. Associated results are also given for the sea surface drag coefficient and the turbulent energy density, as well as a procedure of estimating the sea surface roughness from 1-, 10- and 100-year contour lines. Finally, a simple example of application is given, demonstrating the effect of the sea surface roughness on slowly varying surge motion of marine structures exposed to wind gust.

The sea surface roughness depends on the mechanisms of air–sea interaction and its estimation is difficult; no consistent theory exists covering the range from small waves to big waves including wind waves, combined wind waves and swell, as well as swell. Charnock (1955) presented his formula based on a dimensional argument, i.e. the sea surface roughness \( z_{0} = \beta u_{ * }^{2} /g \), where the original Charnock parameter is \( \beta = 0.012 \), and \( u_{*} \) is the friction velocity. Since then, many different values of \( \beta \) as well as formulae for \( z_{0} \) have been proposed, also containing the wind speed as a parameter; see, e.g. Jones and Toba (2001) for a review.

Drennan et al. (2005) performed a comprehensive intercomparison of different parameterizations of the sea surface roughness using field data from eight locations ranging from lakes to deep-water sea. They found that if bulk sea state parameters such as significant wave height and spectral peak period are available, then the roughness formula as a function of the spectral wave steepness and the significant wave height proposed by Taylor and Yelland (2001) [see Eq. (1)] was the best to use for mixed wind sea and swell, and for swell-dominant situations (see Drennan et al. (2005) for more details). A recent review of the literature is provided by Zhao and Li (2019), followed by presenting results from a comprehensive analysis of the influence of wind waves on wind stress with respect to sea surface roughness and drag coefficient based on both laboratory and field data. In the pioneering work of Powell et al. (2003) and Zhao and Li (2019) it was found that the drag coefficient reaches a peak for strong winds, i.e. for wind speeds exceeding 30–40 m/s. Zhao and Li (2019) also found that a roughness formula in terms of the spectral wave steepness and the significant wave height can be applied to estimate wind stress from low to high winds (see Sect. 2). Myrhaug (2020) demonstrated how this sea surface roughness formula for wind sea can be applied to estimate the sea surface roughness based on wind and wave statistics.

Some recent works related to load assessment studies for offshore wind power systems have advocated the use of the Hsu (1974) relationship for \( z_{0} \) where the sea surface roughness depends on the wave conditions, taking the Charnock parameter equal to the wave steepness s, i.e. \( \beta = s = H/\lambda \), where H is the wave height and \( \lambda \) is the wave length. This was adopted and used for shallow-water waves by Donkers et al. (2011) and Kalverla et al. (2017) as part of an extensive analysis of wind conditions in the Dutch part of the southern North Sea. Furthermore, Myrhaug (2018) presented some statistical properties of the deep-water wave steepness and the spectral wave steepness based on measured wave data from the Norwegian continental shelf, which, therefore, is related to the Hsu (1974) sea surface roughness.

The sea surface roughness enters in the description of the local wind conditions over the sea surface, i.e. using a logarithmic mean wind speed profile plus a wind gust spectrum; see, e.g. Myrhaug and Ong (2009) who investigated the wave age effect on wind gust spectra for wind waves. Many wind gust spectra have been proposed, see, e.g. Chakrabarti (1990). It is well established that wind gust spectra over sea contain more energy at lower frequencies than those over land [see, e.g. Ochi and Shin (1988), Andersen and Løvseth (2006)]. This spectral property is essential when assessing the response, e.g. of moored ships and structures which are sensitive to excitations at low frequencies.

The main purpose and the novelty of the present article is to demonstrate how the Myrhaug and Fouques (2008) bivariate statistics of the spectral wave steepness and the significant wave height representing wind sea, swell, and combined wind sea and swell can be used to obtain statistical properties of the sea surface roughness for sea states given by Taylor and Yelland (2001), which are best to use for mixed wind sea and swell and for swell-dominated situations. This is relevant to the assessment of local wind conditions at sea, e.g. related to wind load studies on marine structures. The Taylor and Yelland (2001) sea surface roughness is adopted due to its compromise between simplicity and robustness. It is also demonstrated how these results affect the local wind conditions described by the logarithmic mean wind speed profile plus the Ochi and Shin (1988) wind gust spectrum. An example of the application is also included.

The results of using these local wind formulae are elaborated further in Sect. 3.

Here the Myrhaug and Fouques (2008) (hereafter referred to as MF08) joint probability density function (pdf) of \( H_{s} \) and \( s_{p} \) will be used. This pdf originates from best fit to data from the northern North Sea representing wave states containing wind sea, swell, and combined wind sea and swell. Thus, there is consistency in using this pdf and Eq. (1) since both represent similar wave conditions. It should be noted that the results presented in Sect. 3.1–3.3 are solely based on wave statistics. However, use of these results involving U10 should be for U10 less than about 30 m/s.

Here an example similar to that given in Myrhaug and Ong (2009) is chosen, demonstrating the effect of the 1-, 10- and 100-year return period sea surface roughness values on slowly varying surge motion of structures caused by wind gust. In the Myrhaug and Ong (2009) example, the focus was on demonstrating the wave age effect on wind gust and the consequence for slowly varying surge motion of moored marine structures.

Some statistical features of the Taylor and Yelland (2001) sea surface roughness defined as a function of the spectral wave steepness and the significant wave height are provided using the Myrhaug and Fouques (2008) bivariate statistics of these two sea state wave parameters. Other results for a given sea state include the surface drag coefficient, the logarithmic mean wind speed profile, and the turbulence energy density using the Ochi and Shin (1988) wind gust spectrum.

A procedure to determine the sea surface roughness based on the 1-, 10- and 100-year return period contour lines of \( H_{s} \) and \( s_{p} \) as well as the associated values of \( H_{s} \) and \( s_{p} \) is also given. The presented analytical approach can be applied to estimate the sea surface roughness based on available wave statistics.

Although simple and limited to conditions representing mixed wind sea and swell, as well as swell-dominated conditions for the spectral peak steepness being larger than 0.02, the present results should be useful for the assessment of local wind conditions at sea, e.g. relevant to wind load studies on marine structures. According to Zhao and Li (2019), the sea surface drag coefficient reaches a peak for wind speeds exceeding 30–40 m/s, and thus it is recommended to use the present results for wind speeds less than about 30 m/s.