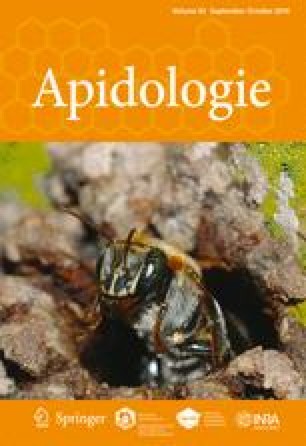 A scientific note on amoeboid movement of honey bee semen

Honey bee (Apis mellifera) semen is a tan, viscous liquid containing tightly packed and slowly moving spermatozoa (Stort & Goncalves 1986). Immediately after transfer of spermatozoa to the queen’s spermatheca, they move faster, but after 1 h, the movement stops (Kerr et al. 1962) and later during storage the spermatozoa remain immotile (Lensky & Schindler 1967). The immotility is reversible as long as the spermatozoa are alive (Verma 1978). In nature, honey bee semen is diluted with spermathecal fluid but the spermatozoa survive also in many human made diluents (Moritz 1984; Taylor et al. 2009).

Here, I report that diluted honey bee semen behaves in an unusual way; it produces pseudopodia and is able to move. The movement differs from the amoeboid movement of a single spermatozoon (Nelson & Ward 1981) and involves the coordinated behaviour of a group of spermatozoa.

Honey bee drones were collected at hive entrances and were stored in a cage attended by workers. To initiate ejaculation, the abdomen of a drone was pressed with fingers, a standard method (Laidlaw & Page 1997). The semen was collected with a syringe designed for instrumental insemination of honey bee queens. The semen was evacuated from the syringe onto a microscopic slide. From there, it was collected passively into a MEDLAB glass capillary (inside diameter 0.7 mm, outside diameter 1.3 mm and length 50 mm). The semen inside the capillary was diluted 1:1 (v/v) with spermathecal fluid obtained from a young uninseminated honey bee queen. Its spermatheca was dissected from the queen immediately before the experiment and crushed on a microscope slide. The spermathecal fluid was collected using the insemination syringe, and a droplet of it was evacuated onto another clean microscopic slide. When the capillary with semen was brought into contact with the droplet, it was drawn into the capillary and diffused through the semen. The capillary was positioned horizontally, and it was photographed every hour with a Nikon D70 digital camera to determine the speed of semen movement. The experiment was repeated 10 times using the semen of different drones.

The behaviour of diluted semen on a microscopic slide was observed with a Nikon Eclipse E600 microscope. Semen movement was recorded with a JVC colour video camera (resolution 720 × 576) attached to the microscope. In some experiments, the droplet of diluted semen was surrounded by six small droplets of spermathecal fluid. There was a distance of about 0.2 mm between the droplet of semen and the droplets of spermathecal fluid. If a pseudopodium formed near a droplet of diluent, it was video recorded.

In all experiments, the capillaries or microscope slides with semen were kept in a transparent plastic container with a tissue wetted with distilled water. The wet tissue provided high humidity and prevented the semen from drying. In some experiments, the semen was diluted in Kiev buffer instead of spermathecal fluid. The Kiev buffer consisted of 0.3 g D+ glucose, 0.41 g potassium chloride, 0.21 g sodium bicarbonate and 2.43 g sodium citrate per 100 mL water (Paufler 1974; Collins & Donoghue 1999).

In the capillary, undiluted honey bee semen behaved like any other highly viscous liquid – when it was drawn into the capillary, it remained at the end of it. The semen behaved differently when it was diluted 1:1 (v/v) with spermathecal fluid obtained from an uninseminated honey bee queen. The diluted semen did not stay at the end of the capillary: its whole volume travelled slowly along the capillary towards the opposite end. During the first hour, the semen travelled at 0.13 ± 0.04 mm/min (mean ± SD; n = 10), slowing down with time (Figure 1).
Observations by light microscopy revealed pseudopodia inside the capillary at the front of the column of diluted semen (Figure 2a, Online Movie 1). Pseudopodia formed not only in the capillary experiment but also at the edge of a droplet of diluted semen on a microscope slide. On the slide, the droplet did not go in any specific direction but spread in all directions (Figure 2b, Online Movie 2). The pseudopodia were formed by a large number of spermatozoa tightly packed along each other (Figure 2a). In some circumstances, a group of spermatozoa aligned themselves along their lengths and synchronized the action of their flagella. A pseudopodium was formed when the force produced by the group of synchronized spermatozoa was strong enough to overcome the liquid’s surface tension. The pseudopodium lengthened and widened over time as other spermatozoa joined it. Immediately after forming, the pseudopodium extended perpendicularly to the edge of the liquid but its later direction of extension varied. Some pseudopodia bifurcated or re-entered the droplet of semen (Figure 2b). Some pseudopodia were longer than the length of one spermatozoon, which is 250–270 μm. This suggests that the spermatozoa at the front of the pseudopodium were pushed by those behind them. Honey bee semen also showed amoeboid movement when diluted not with spermathecal fluid but with Kiev buffer.

The results presented here show that diluted honey bee semen can move by producing pseudopodia. The amoeboid movement of diluted semen can be triggered by the presence of carbohydrates in the diluent or by reduction of the semen’s viscosity. The reduction of movement speed with time probably is related to depletion of the sugars present in the semen (Blum et al. 1962).

I thank Michael Jacobs and two anonymous reviewers for helpful comments on earlier versions of this paper. This work was funded by Ministry of Science and Higher Education grant No. N N311 292436.