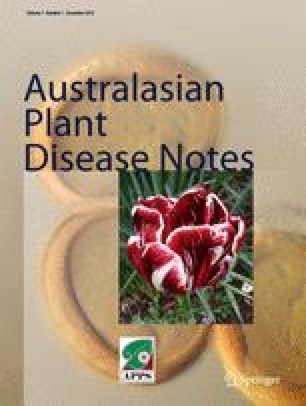 In this study, a survey of physiological races of H. vastatrix was carried out on 64 coffee leaf rust samples from genotypes of Coffea arabica, C. canephora and Híbrido de Timor/Icatu derivatives that are cultivated in Brazil’s main production areas. Based on the infection pattern in a series of differentiating coffee tree clones, the races I, II, III and XXXIII were characterised. The H. vastatrix race XXXIII, reported here for the first time, was associated under field conditions with infection of Catimor derivatives, which are generally considered resistant to coffee leaf rust.

Coffee leaf rust, caused by Hemileia vastatrix Berk. et Br., is the most important disease of Coffea arabica and C. canephora in Brazil. The fungus is distributed widely in all coffee producing areas of the country, causing losses around 30 % in the absence of chemical control (Zambolim et al. 2005).

In Brazil, coffee breeding aimed at leaf rust resistance is based on the tetraploid hybrids Icatu and, mainly, Híbrido de Timor (HDT), as a resistance source. Such interspecific hybrids, obtained from a cross between C. arabica and C. canephora, contain several rust resistance genes introgressed from C. canephora. However, the development of coffee varieties with durable resistance to leaf rust has been a great challenge due to the high genetic variability of H. vastatrix populations. Studies of race dynamics, appearance and shifts, as well as the occurrence of complex races, suggest a strong evolutionary potential within H. vastatrix populations (Cabral et al. 2009).

In this study, the goal was to identify physiological races of H. vastatrix occurring in the main producing areas of C. arabica, C. canephora and interspecific hybrids, in 27 municipalities of the States of Minas Gerais, Espírito Santo and Rondônia. For this purpose, 64 samples were obtained from bulks of spores from single plants, containing pustules of coffee leaf rust, collected randomly.

Each sample was used of infect in susceptible seedlings of C. arabica (Catuaí Vermelho) or C. canephora cv. conilon var. Vitória (Clone 02) in order to obtain enough urediniospores to inoculate the series of differentiating coffee clones. The seedlings were 6 months old and multiplication of the isolates was performed in growth chambers under controlled conditions (24 °C and 12 h of fluorescent light). To prevent cross-infection, each inoculated seedling was maintained in an individual compartment. The viability of H. vastatrix urediniospores was evaluated by germination on 2 % agar-water using the method described by Zambolim and Chaves (1974). The percentage of germination was determined by light microscopy (increase of 100X), of the relation between germinated and total spores. All 64 samples showed >20 % germination and were considered appropriate for inoculation tests.

Inoculations of the coffee differential clones was done using the leaf disc method (Eskes 1982), with modifications. The efficiency of this methodology in studies of vertical and horizontal resistance and characterization of physiological races has been demonstrated (Eskes 1982; Cabral et al. 2009; Capucho et al. 2009; Brito et al. 2010). Urediniospores of each H. vastatrix sample were inoculated over the abaxial surface, using a dry brush, in nine leaf discs obtained from completely developed young leaves, of each coffee differential clone (Table 2). The inoculated leaf discs were placed in germination boxes (plastic box 11 × 11 × 3 cm) containing moistened foam and nylon, sprayed with distilled water to maintain the moisture around 100 %, kept in the dark for 48 h at 24 °C, and then transferred to a chamber under controlled temperature (24 °C) and light (12 h of fluorescent light) conditions (Capucho et al. 2009).

In this study, the characterisation of physiological races of H. vastatrix was based on the phenotypic expression (absence or presence of urediniospores) showed by the inoculated leaf discs in each differential clone (Várzea and Marques 2005). The evaluation was initiated as soon as the first urediniospores appeared on the abaxial surface of the leaves in control susceptible seedlings (Catuaí Vermelho and Clone 02). The analyses were carried out at intervals of 7 days for 4 weeks and the total evaluation period (about 50–60 days) was enough to allow the development of fully compatible responses on the susceptible host genotype. The results were compared with data reported in the literature (Várzea and Marques 2005).

Race XXXIII contains two or three genes of virulence in its inferred genetic constitution (v5,7 or v5,7,9) able to overcome the resistance of some varieties that had been released as resistant to coffee leaf rust, including Oeiras MG 6851, a cultivar belonging to the Catimor group.

This finding, as well as those of Cabral et al. (2009), may be used to redirect the research strategies in coffee breeding programs, in order to obtain plants with resistance to the more complex races of the pathogen.