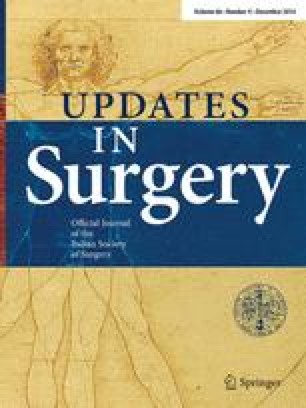 A diverticulum of the rectum is a rare complication (2, 5 %) [1, 2] after trans-anal staple procedures, often resulting in faecal matter entrapment leading to the formation of a faecolyth which is likely to obstruct the internal orifice. This can cause local sepsis, eventually requiring reoperation [2].

A 28-year-old female operated on with stapled trans-anal rectal resection (STARR) for rectocele was referred to our Institution for severe chronic constipation, worsened in the last weeks with fever, abdominal and perineal pain, and rectal bleeding. Clinical examination and MRI revealed a rectal diverticulum with faecal impaction requiring removal under anaesthesia. Five days after stool disimpaction, she underwent MR-defecography which confirmed the presence of one posterior large diverticulum with incomplete elimination of enema. Endoscopy was carefully carried out showing multiple orifices (six) distributed circumferentially along the staple line; two retained agraphes...

Staple Line Faecal Impaction Staple Line Disruption Good Wound Healing Internal Orifice
These keywords were added by machine and not by the authors. This process is experimental and the keywords may be updated as the learning algorithm improves.