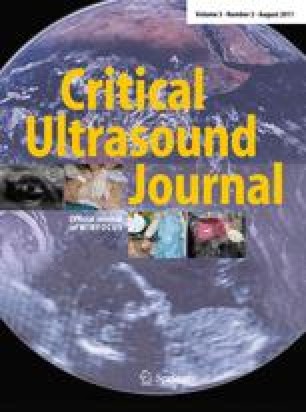 A few authors have published articles on unusual cases of internal hernias; however, there are no reports in the literature of a hernia arising from a right-sided retroperitoneal defect resulting in the incarceration of small bowel in Morison’s pouch. This case illustrates how point-of-care ultrasound was used to diagnose a small bowel obstruction in an atypical location.

A 26-year-old man presented to the emergency department (ED) with a 3-h history of sharp upper abdominal pain. The pain was associated with bilious, non-bloody emesis. The pain began suddenly after eating a meal and the patient reported that he had not passed flatus or had a bowel movement in 2 days. There was no history of similar pain. The patient’s medical history was non-contributory and he had no previous surgeries.

The patient’s temperature was 98.0°F, blood pressure 123/95, heart rate 100, and respiratory rate 28 breaths per minute. The abdomen was soft, tender to palpation over the right upper quadrant, with a positive Murphy sign. There was right costovertebral angle tenderness. Examination of the heart and lungs was normal.

The patient’s AST, ALT, lipase, alkaline phosphatase, urinalysis and complete blood count were normal. Abdominal radiographs showed multiple distended loops of small bowel with air-fluid levels suggestive of an adynamic ileus or early partial small bowel obstruction. An abdominal ultrasound of the right upper quadrant (performed by a sonographer in the radiology department) was interpreted as limited secondary to overlying bowel gas (Fig. 1), but showed no evidence of gallstones, gallbladder wall thickening, common bile duct dilatation or pericholecystic fluid.
On re-examination, the patient’s pain had localized to the right flank region and the decision was made to order a non-contrast CT of the abdomen and pelvis to evaluate for possible kidney stone. The CT revealed a collection of fluid and gas posterior to the liver with an adjacent perihepatic fluid collection (Fig. 2). A recommendation was made by the attending radiologist to perform a contrasted CT to evaluate for possible abscess. As the patient was drinking, the oral contrast in preparation for the second CT a point-of-care ultrasound of the right upper quadrant and right flank region was performed by an ED physician. The ultrasound revealed distended loops of small bowel with hyperperistalsis in Morison’s pouch suggesting an obstruction associated with small bowel herniation into the retroperitoneum (Fig. 3). The CT with IV and oral contrast confirmed the diagnosis.

The patient was taken for an exploratory laparotomy where a 3 cm defect in the retroperitoneum was found above the superior pole of the right kidney containing 10 cm of hyperemic and ischemic jejunum. The bowel required resection with the remaining ends joined in anastomosis followed by repair of the 3 cm retroperitoneal defect. The patient had an uneventful postoperative course and was discharged home after 10 days.

Internal hernias are rare, accounting for <1% of all instances of intestinal obstruction and leading to only 0.5–4.1% of cases of acute intestinal obstruction caused by hernias [1]. They typically involve the small bowel herniating through a peritoneal or mesenteric aperture within the peritoneal cavity [1]. The hernial orifice is commonly an anatomic structure or pathological defect of congenital or acquired origin related to defective approximation of peritoneal flaps during embryogenesis or surgically created spaces [1, 2].

Internal hernias are generally classified into six main groups: paraduodenal, tranmesenteric, pericecal, supravesical, intersigmoid, foramen of Winslow, and omental hernias [1]. To our knowledge, there are no other reports in the literature of a hernia arising from a retroperitoneal defect resulting in the incarceration of small bowel in Morison’s pouch. Other unusual sites include the inferior ileocecal recess [3], falciform ligament [4] and descriptions of a potential space for herniation between the fourth portion of the duodenum and abdominal aorta [5]. The origin of this patient’s hernia remains unclear; however, the possibility of a preexisting congenital anomaly of the retroperitoneal space just above the superior pole of the right kidney would have to be considered.

The diagnosis of an internal hernia can be challenging because the symptoms are often intermittent and nonspecific [6]. Small and easily reducible hernias may not produce clinical symptoms while other patients may experience intermittent periods of pain [1]. Radiological studies are most likely to diagnose an internal hernia if they are performed while the patient has symptoms [1]. Contrast studies and CT examinations may identify an abnormal location or disturbed arrangement of the small intestine, the presence of several bowel loops within a hernial sac, or bowel dilatation and stasis within the herniated loops [1]. Studies performed once the hernia has spontaneously reduced are often negative and may result in the patient being mislabeled as psychoneurotic [1]. More commonly, internal hernias are diagnosed during a laparotomy performed for acute intestinal obstruction [1].

In patients with SBO plain abdominal radiography is diagnostic in about 50–70% of cases but may be normal in patients who have complete, closed-loop, or strangulated obstructions [7]. Further work up for a clinically suspected SBO may include a small bowel follow through, enteroclysis, CT, ultrasound, or MRI. Ultrasound is as sensitive and is more specific than plain abdominal radiograph, but it is infrequently used for suspected SBO because other tests such as CT can be done rapidly and are more accurate [7]. Signs of small bowel obstruction on ultrasound may include exaggerated peristaltic activity producing a to-and-fro motion (which may decrease or cease with strangulation), dilation of the proximal intestinal segment, and accumulation of fluid and gas [8]. The patient in this case exhibited all of the aforementioned sonographic signs of obstruction. In addition, the presence of bowel in an atypical retroperitoneal location led to the diagnosis of an internal hernia within Morison’s pouch, which was later confirmed intraoperatively.

In cases of obstruction, secondary to an incarcerated loop of bowel, an immediate diagnosis is essential because ischemia and necrosis can result from delay in proper treatment [1]. The presence of an early or partial SBO had been suggested by plain radiograph. The gas seen on the technically limited ultrasound study of the right upper quadrant was a clue to the presence of a developing obstruction in an atypical location. This case illustrates how physician performed ultrasound examination can be used in concert with the patient’s clinical presentation to yield an unlikely diagnosis, even when earlier attempts at radiological assessment have failed.