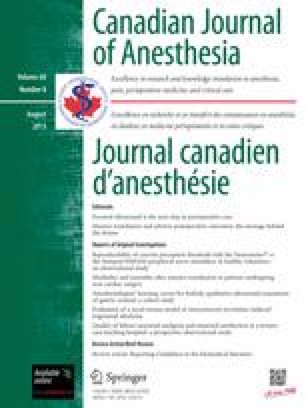 Ropivacaine Pigtail Catheter Postoperative Chest Paravertebral Block Unnecessary Exposure
These keywords were added by machine and not by the authors. This process is experimental and the keywords may be updated as the learning algorithm improves.

Non-neuraxial techniques, such as bilateral paravertebral blocks (PVB), are increasingly offered for abdominal surgeries1 where identification of the catheter tip improves safety and efficacy. A variety of techniques (e.g., fluid, air,2,3 or colour Doppler4 have been described to locate the needle or catheter tip, each with its own advantages and drawbacks. We describe a case of bilateral PVB wherein intracatheter air was visualized on initial injection under ultrasound, localizing the catheter tip.

A 46-yr-old female patient (weight, 66 kg; height, 158 cm) scheduled for laparotomy consented to bilateral PVB for postoperative analgesia. After positioning the patient prone, a pre-procedural scan with a linear probe (7-13 MHz, SonoSite™ M-turbo, Bothel, WA, USA) identified the T8-9 paravertebral space (PVS) bilaterally. Using sterile precautions, continuous PVB was performed using Sonocurl catheters (Sonolong, Sonocurl 100, Pajunk® Medizintechnologie GmbH, Geisingen, Germany). The blocks were performed using an intercostal approach with the needle inserted in plane from lateral to medial. The needle tip was identified in the PVS by observing the displacement of pleura with injection of 3 mL of 5% dextrose. The catheter was introduced without real-time ultrasound guidance until it extended 4 cm into the space. Next, 0.5% ropivacaine 20 mL was injected in small aliquots while observing for drug delivery under ultrasound. At the start of injection, we observed air inside the catheter being displaced, confirming catheter tip location within the PVS (Figure, Panels A and B). We further confirmed drug delivery using colour Doppler and pleural displacement. A postoperative chest x-ray also showed the catheter tip in the paravertebral area on magnification (Figure, Panel C).

Air used as a contrast to identify the catheter tip is well described for extremity nerve blocks,2 but such descriptions are uncommon for truncal blocks. Hydro location is useful when the surrounding tissue, i.e., nerves and fascia, are hyperechoic or isoechoic, giving a clear contrast for the fluid, but PVS appears hypoechoic. Hence, liquids may not provide the required discriminative characteristics to locate the catheter tip. Although air is hypoechoic, its deposition around the catheter tip can provide better surrounding contrast to make the tip visible. We deliberately avoided injecting additional air to prevent difficulties in making further block attempts, if needed. While radiological confirmation of catheter tip location is common practice, confirming the catheter tip location while performing the block can avoid unnecessary exposure to radiation.5 Further studies are needed to evaluate the utility of this technique. There is no foolproof method to identify the catheter tip in the PVS, especially with interference from pleural movements with colour Doppler. Clinicians often have to rely on pleural displacement resulting from injection of a drug. Use of the sonocurl pigtail catheter likely allowed the catheter to remain in the intercostal space once it was inserted, thus facilitating insonation of the catheter tip.

In summary, there are multiple recognized techniques to locate the position of the catheter tip for continuous PVB, and intracatheter air may serve as an additional tool for this purpose.