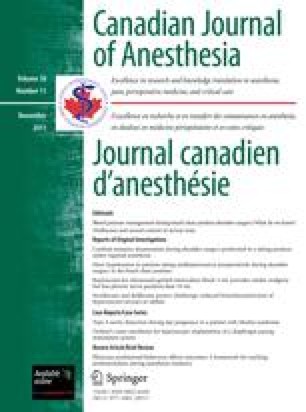 Following a total thyroidectomy, we replaced the endotracheal tube with a laryngeal mask airway, namely, the LMA-Classic™, in a patient with symptomatic tracheal compression and probable obstructive sleep apnea. Spontaneous ventilation was observed bronchoscopically through the LMA-Classic. Supraglottic swelling, extraglottic collapse on inspiration, and intrathoracic collapse on expiration were documented prior to recovery. These observations were of sufficient concern to warrant reinsertion of the endotracheal tube and subsequent tracheal extubation over a tube exchanger. Thereafter, we provided face-mask continuous positive airway pressure using a Boussignac mask with an endotracheal ventilation catheter in situ.

Acute airway collapse following thyroid surgery is a rare and potentially serious complication. Diagnosis by conventional methods may be insensitive. Difficulties may not be apparent until the patient becomes distressed after tracheal extubation, and this circumstance will worsen airway compromise. In such a state, re-establishing the airway can become life-threatening. We describe the preemptive identification, physiologic manifestations, and management of the supraglottic and subglottic obstruction exemplified by this case.

Obstructive Sleep Apnea Continuous Positive Airway Pressure Total Thyroidectomy Laryngeal Mask Airway Spontaneous Ventilation
These keywords were added by machine and not by the authors. This process is experimental and the keywords may be updated as the learning algorithm improves.

Symptomatic tracheal compression from thyroid enlargement is relatively rare in the developed world. Even in endemic areas, compression sufficient to result in post-thyroidectomy tracheomalacia is rare,1 , 2 while its very existence in the developed world is questioned.3 - 5 In this case report, we discuss the recognition and management of a patient with symptomatic tracheal compression and document supraglottic, glottic, subglottic, and intrathoracic airway obstruction following a total thyroidectomy. Photographs and video images were obtained and published with the written consent of the patient.

A 43-yr-old male with a thyroid goiter presented for total thyroidectomy. He was a 15-pack-yr smoker with recently diagnosed hypertension. On examination, he had a large neck circumference but a normal interincisor gap and thyromental distance, a full range of cervical and temporomandibular motion, and a modified Mallampati 2 oropharyngeal view. His body mass index was 36 kg·m−2, and he had clinical symptoms of obstructive sleep apnea (OSA), including witnessed snoring, apnea, and daytime somnolence. Preoperative pulmonary function testing and a sleep study had been requested, but the patient did not comply.

He was symptomatic with mild stridor at rest, which worsened with exercise and recumbency. He had some difficulty in swallowing, and his family history was positive for thyroid cancer. Arterial blood gases were not obtained. A chest x-ray showed tracheal compression and deviation with evidence of perihilar bronchiectasis. The ultrasound showed bilaterally enlarged thyroid lobes (each > 10 cm) and multiple nodules. Computer tomography revealed a large heterogeneous thyroid compressing the proximal trachea at the level of the thoracic inlet (Fig. 1) with the narrowest diameter of 0.9 cm.
In the operating room, oximetry, electrocardiogram, noninvasive blood pressure cuff, and invasive arterial catheterization were instituted. Sedation was achieved with a remifentanil infusion 0.07-0.1 μg·kg−1·min−1. Topical lidocaine anesthesia was administered using a mucosal atomization device (LMA Atomization™, Vitaid, Toronto ON, Canada). This was supplemented with lidocaine ointment (5%) applied to the base of the tongue using a laryngoscope blade. A flexible bronchoscope loaded with a reinforced 6.0-cm internal diameter tracheal tube was inserted orally (Teleflex Medical, Research Triangle, NC, USA) with the patient in the sitting position. The supraglottic structures were somewhat redundant with rightward deviation and lateral compression of the tracheal lumen (Fig. 2). A 6.0-mm internal diameter reinforced endotracheal tube (ETT) was advanced into the trachea without difficulty. General anesthesia was then induced with propofol 100 mg and fentanyl 150 μg. Muscle relaxation was facilitated with rocuronium 40 mg. Anesthesia was maintained with an end-tidal sevoflurane concentration of 1.5-2%. Surgery was uneventful and a total thyroidectomy was completed delivering a multinodular gland measuring 12 × 4.4 × 3.7 cm (right), 11 × 5 × 5.3 cm (left), and 6.9 × 4.3 × 4.8 cm (isthmus).
At the conclusion of the surgical procedure, the oropharynx was suctioned, a size 5 laryngeal mask airway, namely, the LMA-Classic™ (LMA; Vitaid, Toronto ON, Canada) was introduced behind the ETT (“Bailey maneuver”),6 and the latter was removed. Proper positioning with a good glottic view was confirmed bronchoscopically through the LMA-Classic, and positive pressure ventilation revealed a patent trachea with no collapse and minimal compression (Fig. 3). Neuromuscular blockade was reversed with neostigmine 2.5 mg and glycopyrrolate 0.4 mg. The flexible bronchoscope was reintroduced through the LMA-Classic, and spontaneous ventilation was observed, confirming the patency of the larynx and trachea. Although spontaneous breathing was not laboured, dynamic compression of the extrathoracic and intrathoracic trachea became evident (see video; available as electronic supplementary material). In addition, supraglottic edema (Fig. 4), adduction of the vocal cords, and downward displacement of the larynx were also evident during inspiration (see video). After a ten-minute period, the decision was made to reintroduce the ETT using a flexible bronchoscope and an Aintree Intubation Catheter (Cook Critical Care, Bloomington, IN, USA). An endotracheal ventilation catheter (ETVC) (CardioMed Supplies, Lindsay, ON, Canada) was then inserted into the trachea, and the ETT was removed when the patient awoke. A Boussignac noninvasive continuous positive airway pressure (CPAP) face mask (Vitaid, Toronto, ON, Canada) with an oxygen flow of 15 L·min−1 was then applied. In the postanesthesia care unit approximately one hour later, the Boussignac mask was removed and replaced with a regular face mask once a quiet and regular breathing pattern was established and the patient was fully awake, obeying commands, and sitting upright. The ETVC remained in place until the patient was ready to be discharged from the postanesthesia care unit.

Airway obstruction after thyroidectomy is a rare but serious complication2 , 3 , 7 which may lead to catastrophic consequences. The causes of airway obstruction specifically related to thyroid resection include postoperative wound hematoma, vocal cord palsy secondary to recurrent laryngeal nerve damage, laryngeal edema, tracheomalacia, hypocalcemia, and pneumothorax. Assessment of the larynx and trachea prior to extubation may predict the risk of postoperative airway obstruction and guide the optimal management strategy; however, the presence of an ETT and positive pressure ventilation may preclude such a diagnosis. Furthermore, tracheal examination must be performed in a manner that minimizes stimulation and coughing in the absence of an ETT.

In this report, an LMA-Classic was used in conjunction with an airway exchange catheter to facilitate the assessment of the airway and as a temporizing measure to assess the adequacy of spontaneous ventilation in the presence of supraglottic and subglottic obstruction. The use of the flexible bronchoscope through the LMA-Classic allowed controlled visualization and assessment of the vocal cords and the tracheal lumen. This was achieved during the spontaneous breathing while regulating the oxygen concentration and depth of anesthesia and ensuring that secretions did not obscure the view. This technique has been previously described.8 , 9

Evidence of tracheomalacia secondary to the thyroid goiter is largely limited to areas with endemic goiters, and it remains a rare diagnosis. A retrospective review from India by Agarwal et al. identified 28 (3.1%) of 900 patients undergoing a thyroidectomy who required treatment for tracheomalacia, with 26 (2.8%) receiving a tracheostomy.1 In another report from Sudan, 6 (5.8%) of 103 patients undergoing thyroid surgery for a large goiter had tracheomalacia, with 5 (4.8%) requiring a tracheostomy.2 These and several other studies indicate a link between a long-standing goiter and tracheomalacia.7 , 9 - 11 Conversely, Lacoste et al. followed a cohort of 3,008 patients undergoing thyroidectomy and found that none of the cases developed tracheal collapse after surgery.3 The main causes of postoperative respiratory obstruction were wound hematoma, bilateral recurrent laryngeal nerve palsies, and laryngeal edema.3 These findings were supported by several other reports.12 - 15

The physiological changes during spontaneous breathing in a patient with tracheomalacia, supraglottic edema, and OSA provide an interesting combination of features. Tracheomalacia occurs when tracheal cartilage becomes soft and weak and is unable to maintain its patency throughout the breathing cycle.10 , 16 , 17 During expiration, the intrathoracic pressure rises above the intraluminal pressure of the trachea, and in the absence of cartilaginous support, the trachea collapses, which reduces the airway cross-sectional diameter.16 - 18 In severe cases, the anterior wall can completely collapse onto the posterior wall. In contrast, the appearance of OSA is quite different. The upper airway narrows, particularly in the velopharyngeal region,19 , 20 and may collapse on inspiration during the sleep or recovery state when the pharyngeal muscles are hypotonic and negative intrathoracic pressures are generated to overcome upper airway resistance.21 This phenomenon was observed in this case where supraglottic collapse and downward displacement of the larynx were evident on inspiration (Fig. 4 and supplementary video). This case presented an interesting combination of airway abnormalities: OSA causing airway collapse on inspiration; tracheomalacia—primarily with extrathoracic involvement resulting in subglottic collapse on inspiration; and to a lesser degree, intrathoracic tracheal collapse on expiration. This situation was complicated further by supraglottic edema and paradoxical adduction of the vocal cords on inspiration.

A potential loss of airway patency was taken into consideration when determining the tracheal extubation strategy for this patient. This occurrence might result from supra- or subglottic obstruction or from OSA and tracheomalacia, respectively, following extubation. After bronchoscopic inspection, it was evident that additional considerations included supraglottic edema and paradoxical vocal cord movement. No difficulties were observed under controlled anesthetic conditions with spontaneous ventilation and in the presence of an LMA-Classic, but we were concerned that this might not be the case with upper or lower airway obstruction worsening following recovery of consciousness or the removal of the LMA-Classic. The application of CPAP during spontaneous breathing improves airway patency in both tracheomalacia17 and OSA.20 Continuous positive airway pressure effectively aids in splinting the trachea open by preventing its collapse during expiration while maintaining patency of the upper airway during inspiration.17 , 20 - 22 Furthermore, the Boussignac mask is open to the atmosphere, generating positive pressure by the Bernoulli principle in a flow-dependent manner.23 This allowed for an ETVC to be advanced through the open lumen of the mask (Fig. 5). The ETVC could facilitate reinsertion of the ETT if re-intubation were required.

We do not know the outcome had the patient been extubated without CPAP or an ETVC, and we do not contend that either the edema or the tracheomalacia resolved during the time these remained in place. However, this strategy did permit the stepwise withdrawal of support in a fashion that we believe had the highest probability of safe reversal, namely, the reinstitution or escalation of CPAP and tracheal reintubation.

In summary, this report describes a patient with documented supraglottic, subglottic, and intrathoracic airway obstruction, which was evident only with spontaneous ventilation following tracheal extubation. This condition was confirmed by bronchoscopic assessment through an LMA-Classic, which enabled proactive management with noninvasive CPAP to maintain airway patency. Access to the trachea was maintained with an ETVC left in situ to facilitate reintubation.

Funding for this publication was entirely with institutional resources.

There are no pertinent conflicts of interest relating to this report.