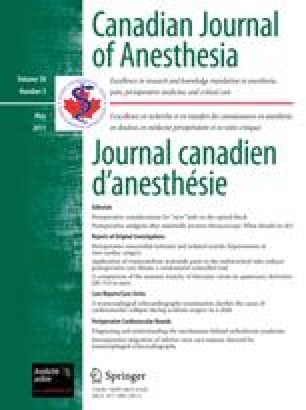 Diagnosing and understanding the mechanisms behind orthodeoxia syndrome

Orthodeoxia is a rare clinical syndrome characterized by deoxygenation in the upright position and relieved by recumbency. Our rounds illustrate how cardiovascular imaging and echocardiography can be used to diagnose the etiology of this syndrome with respect to its association with patent foramen ovale (PFO) and ascending aortic aneurysms. The rounds also demonstrate the use of peri-operative transesophageal echocardiography (TEE) in understanding the mechanisms contributing to the condition and aid in appropriately planning medical and surgical management.

Inferior Vena Cava Aortic Aneurysm Superior Vena Cava Right Atrium Atrial Septal Aneurysm
These keywords were added by machine and not by the authors. This process is experimental and the keywords may be updated as the learning algorithm improves.

The purpose of this Perioperative Cardiovascular Rounds article is to illustrate how cardiovascular imaging and echocardiography can be used to diagnose the etiology of the rare clinical syndrome, orthodeoxia, which is characterized by deoxygenation following sitting or standing from a recumbent position. In this case, the rounds also demonstrate the use of perioperative transesophageal echocardiography (TEE) to help understand the mechanisms contributing to the condition and plan appropriate medical and surgical management. Written consent for publication of this article was obtained from the patient’s son who has power of attorney.

A 76-year-old male presented to a community hospital with sudden onset chest pain, dyspnea, and diaphoresis. His medical history was remarkable for hypertension and hyperlipidemia. He was an ex-smoker of 40 years and he denied excessive alcohol intake. The patient was diagnosed in the emergency room with a non-ST segment elevation myocardial infarction and he was treated medically. Coronary angiography revealed severe three-vessel disease, and a transthoracic echocardiogram demonstrated normal left and right ventricular function with inferior wall hypokinesis. He was referred to our institution for consideration of coronary artery bypass grafting.

While awaiting surgery, the patient continued to experience intermittent chest pain, which was relieved by nitroglycerine spray. His blood pressure, pulse, and respiratory rate were within normal limits. Physical examination revealed normal heart sounds with no audible murmur or jugulovenous distension. However, pulse oximetry revealed an oxygen saturation (SpO2) level of 87% with a fractional inspired oxygen concentration (FIO2) of 0.21. There was no improvement noted after applying oxygen via a facemask at F i O2 of 0.5. Electrocardiography was unremarkable, with the exception of lateral T-wave flattening. Chest radiography noted cardiomegaly in the left ventricular configuration with minor left-sided basal atelectasis. Arterial blood gas analysis following commencement of non-invasive ventilation at F i O2 of 1.0 revealed an arterial oxygen saturation level of 91% (PaO2 61 mmHg). Computed tomography (CT) imaging of the patient’s thorax with radiocontrast failed to show any evidence of pulmonary embolism. Incidental findings were very mild peripheral interstitial changes; otherwise, the lung fields were normal. Also noted was aneurysmal dilatation of the ascending aorta measuring 56 mm in diameter.

Surprisingly, the patient’s SpO2 on FIO2 0.5 improved dramatically from 85% in the sitting position to 100% in the supine position. Arterial blood gas sampling revealed a corresponding increase in PaO2 from 44 to 125 mmHg, clinically suggesting orthodeoxia syndrome. Transthoracic echocardiography was repeated, this time by injecting agitated saline contrast into the patient’s right cephalic vein while he was in the supine and upright positions. Sequential shadowing of his right and left atria following injection of contrast suggested a large interatrial defect. This phenomenon was markedly accentuated in the upright position (Fig. 1, video clips 1 & 2). Subsequent TEE revealed the presence of a patent foramen ovale (PFO) with significant right to left shunt.
The patient underwent surgical closure of the PFO, aortoplasty, and two-vessel coronary artery bypass grafting. His pre-bypass systolic/diastolic pulmonary artery pressures were 20/8 mmHg following insertion of a pulmonary artery catheter. Intraoperative TEE demonstrated the presence of the large PFO formed by a defect in a highly mobile interatrial wall. A 110° multiplane view revealed a distortion in the expected anatomy, with both vena cavae out of the image plane. The ascending aortic aneurysm was observed to be compressing the right atrium (RA), allowing a high velocity jet to traverse the PFO (Fig. 2, video clip 3) and producing the right to left shunt. The surgeon confirmed the source of the blood flow as the superior vena cava (SVC), which was described as being displaced laterally by the ascending aneurysm. These findings were corroborated by the patient’s initial CT images, which showed significant lateral displacement of the SVC by the ascending aorta with substantial compression of the RA (Fig. 3). A postoperative TEE after surgical closure of the PFO and repair of the aortic aneurysm showed no residual septal defect. The patient made a steady postoperative recovery and was discharged 10 days later.

Orthodeoxia is a relatively rare syndrome usually accompanied by platypnea, which is characterized by dyspnea and deoxygenation in the upright position and relieved by recumbency. There were fewer than 50 reported cases before 1999.1 The most frequent etiological association is the presence of an interatrial communication in the form of an atrial septal defect, atrial septal aneurysm, or a PFO. Paradoxically, this can lead to profound postural hypoxemia through a right to left intracardiac shunt in the absence of pulmonary hypertension, as was the case in our patient. There is a strong association of ascending aortic aneurysms and orthodeoxia in the presence of an interatrial defect, with a prevalence of over 60% being reported.2 Although it is not clearly known how an enlarged aortic root can lead to this phenomenon, postulated mechanisms include deformation of the RA by the enlarged aorta causing preferential flow-directed shunting from the inferior vena cava (IVC).3 Laybourn et al.4 suggested that enlargement of the ascending aorta induced a counterclockwise rotation of the heart in the upright position, thereby allowing preferential IVC flow through a distorted atrial septum. It has also been suggested that the upright position allows redirection of flow caused by an anatomic distortion of the RA from a loculated pericardial effusion, aortic elongation,5 or aortic aneurysm in the presence of an interatrial communication.1 Recent TEE studies in patients with a PFO remark that an enlarged ascending aorta can cause gravitational compression of the RA in the upright position. In so doing, the interatrial septal wall tension is reduced, resulting in a characteristic billowing pattern of the septum and leading to preferential IVC flow through the fossa ovalis.2

Although RA compression by the aneurysm was seen clearly on echocardiography, our findings are unique because the surgical and radiographic findings suggest that flow through the PFO may be arising from the laterally displaced SVC rather than from the IVC as previously reported. Although our TEE views were not able to capture direct vena caval flow due to distortion in anatomy, the transthoracic echo study showing significant interatrial shunting (following injection of agitated saline contrast into the patient’s upper limb while he was in the upright position) may lend further weight to our hypothesis. Our case highlights the use of perioperative echocardiography to help diagnose this uncommon syndrome, understand the mechanisms contributing to the condition, and plan its appropriate surgical repair.