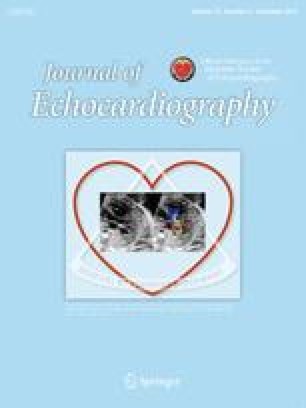 Case image in cardiovascular ultrasound
A 23-year-old woman was referred to us at 33 weeks of gestation because of an abnormal fetal four-chamber view. Fetal echocardiography showed that the right atrium, tricuspid valve, right ventricle (RV), pulmonary valve and pulmonary artery were on the same axial plane of the chest (Fig.  1a, Video 1a). The left atrium (LA) seemed normal, but the left ventricle (LV) was not depicted. The ventriculoarterial connection was suspected to be a double outlet right ventricle (DORV) with coarctation of the aorta (CoA). At 34 weeks, a small LV was depicted more inferiorly to the RV on the sagittal plane of the chest (Fig.  1b, Video 1b). A detailed observation of the LV revealed that the LA was connected to the inferior small LV on the right side through a restricted mitral valve (Fig.  1c, Video 1c). A ventricular septal defect (VSD) was also detected. Three-dimensional (3D) color Doppler tomographic ultrasound imaging (TUI) (Voluson E8; GE Healthcare Japan, Tokyo, Japan) revealed that the...

All authors declare no conflict of interest.

All procedures followed were in accordance with the ethical standards of the responsible committee on human experimentation (institutional and national) and with the Helsinki Declaration of 1964 and later versions.