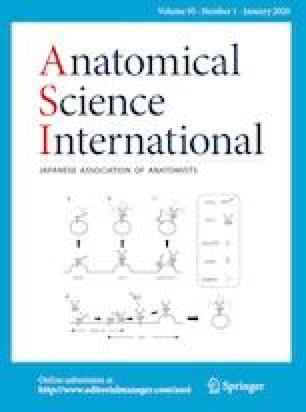 Evaluation of the pressure on the dorsal surface of the distal radius using a cadaveric and computational model: clinical considerations in intersection syndrome and Colles’ fracture

The fibers of the abductor pollicis longus (APL) and extensor pollicis brevis (EPB) muscles intersect the distal radius. This anatomical structure puts pressure on the dorsal surface of the distal radius when various wrist positions are adopted. An increase in this pressure is associated with the risk of intersection syndrome and with immobilization after Colles’ fracture. However, the relationship between the pressure on the distal radius and various wrist positions remains unclear. This study was established to provide quantitative data on the mechanical effect of the pressure exerted by the APL and EPB. Ten cadaveric wrist models containing a force sensor were prepared and used to record pressure levels at various wrist positions, such as pronation, supination, flexion and dorsiflexion, and radial and ulnar deviation. A three-dimensional simulation model comprising four bones, one muscle, one tendon, and one tendon sheath was constructed and analyzed in detail using the finite element method. The contribution of the APL and EPB to the pressure exerted on the distal radius was quantified by dissecting muscles while measuring pressure. The position (pronation and ulnar deviation without flexion/dorsiflexion) associated with a strong force being exerted on the distal radius was determined by measuring and analyzing the mechanical effect. We concluded that this position increases the risk of intersection syndrome but provides effective immobilization after Colles’ fracture. The cadaveric and computational method presented herein is the first to identify the anatomical relationship between the pressure on the distal radius and various wrist positions.

Hiroki Yokota and Masaya Yasui contributed equally to this work.

HY, MY, and SH conceived and designed the research. HY and MY performed the experiments, collected the data, and prepared figures. HY and SO conducted the simulation analysis. HY, MY, SH, NH, and MN provided constructive suggestions and discussions. SH, SO, TN, and MN reviewed and revised the manuscript. All authors were involved in the discussion of the results and writing of the manuscript.

S1 Video. Motion behavior of a bone fracture fragment caused by moving a wrist using a cadaveric model. The upper limb of the cadaver was dissected, and the bone of the distal radius was cut to create a fracture line and thus develop a cadaveric model of Colles’ fracture. Note that the cadaver was fixed using a special protocol named the Thiel method, which enables a greater degree of flexibility, allowing powerful movement of the limbs (Thiel, 1992a; Thiel, 1992b) (MP4 19562 kb)