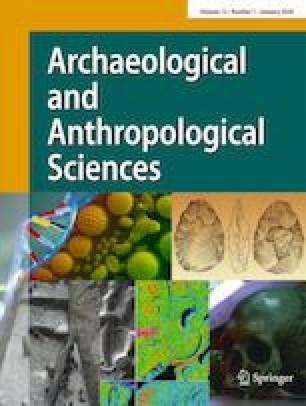 This paper explores the production characteristics and provenance of Islamic glazed pottery in the Adiabene region of north-eastern Mesopotamia. Samples cover the entire time span under study, i.e., from the Early to the Late Islamic periods. Analytical techniques such as ceramic petrography, powder X-ray diffraction, scanning electron microscopy, and X-ray microanalysis were employed to determine compositional (mineralogical and chemical) and technological characteristics. Based on the comparison of ceramic fabrics with up-to-date knowledge of regional geology, local plain pottery, and the published petrography of Mesopotamian ceramics, several provenance groups of glazed pottery (and one group of unglazed pottery) in the sample collection, originating from the Zabs catchment, the middle course of the Tigris (Samarra?) and the middle and lower course of the Tigris (Baghdad and/or Basra?) were defined. Dynamic oscillations in the ratio of regionally produced and imported pottery enable a detailed study of the socio-economic differences between the Early and Middle Islamic periods.

The surveys and analyses of the material were conducted within the frame of the project concerning the medieval urban network in the Adiabene region (MULINEM). The ceramological research would not be feasible without the constant support of the heritage authorities in Iraqi Kurdistan, namely of Mr. Mala Awat (Abubakir O. Zainadin), Head of the General Directorate of Antiquities, Erbil, and Mr. Nader Babaker, Director of the Erbil Directorate of Antiquities. The second author wishes to express his gratitude to the directors of the Qasr Shemamok research team, Prof. Olivier Rouault and Prof. Maria Grazia Masetti-Rouault, for giving him the opportunity to participate in the project and for their approval of the inclusion of pottery samples from the survey in this research. Thank goes also to Prof. Jason Ur (Harvard University) for his kind approval to study the site of Hazza in the EPAS study area. The writing of this paper was supported by a project of Palacky University Olomouc, Faculty of Arts, No. FPVC 2017/12. Thanks are due to James Raymond for proofreading the manuscript and two anonymous reviewers for their extensive and valuable comments.