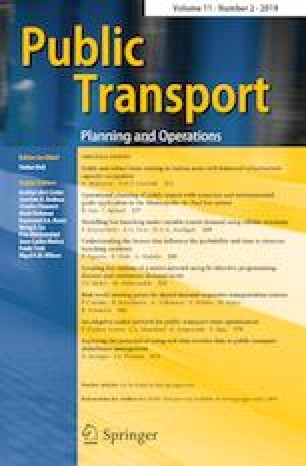 While shared demand-responsive transportation (SDRT) systems mostly operate on a door-to-door policy, the usage of meeting points for customer pick-up and drop-off can offer several benefits, such as fewer stops and less total travelled kilometers. Moreover, real-world meeting points offer a possibility to select only feasible and well-defined locations where safe boarding and alighting are possible. This paper investigates the impact of using such meeting points for the SDRT problem with meeting points (SDRT-MP). A three-step procedure is applied to solve the SDRT-MP. Firstly, the customers are clustered into temporary and spatially similar groups and then the alternative meeting points, for boarding and alighting, are determined for each cluster. Finally, a neighbourhood search algorithm is used to obtain the vehicle routes that pass through all the used meeting points while respecting passengers’ time constraints. The goal is to examine the differences of a real-world meeting point-based system in contrast to a door-to-door service by a simulation with realistic meeting point locations derived from the map data. Although the average passenger travel time is higher due to increased walking and waiting times, the experiment highlights a reduction of operator resources required to serve all customers.

Appendix A: Preliminary note on notation and algorithms

Square brackets indicate access to a certain element in the vector or a set. For instance, S[0] indicates an access to the first element of the set S. Additionally, note that the authors employ zero-based indexing which is common in C like programming languages. In many algorithms, we used mathematical notation for what are common algorithmic procedures. This allows algorithms to be more compact while still keeping the same level of information.

Algorithm 2 describes the procedure for the meeting point determination for a given demand cluster. The mentioned 2-Combinations function yields all possible paired combinations of a given set, e.g. 2-Combinations(a,b,c,d) = [a–bcd, b–acd, c–abd, d–abc, ab–cd, ac–bd, ad–bc]. The algorithm returns the optimal combination in terms of number of subgroups and summed squared walking distances.

Each node has several parameters that define the trip demand. Similarly, each directed edge has its own associated distance and travel time parameters. To take into account the multiple alternative meeting and divergence points, some of these parameters are defined as functions of the chosen meeting/divergence points. For each \(i\in {\mathcal {M}}\cup {\mathcal {D}}\), let \(N_i\in {\mathbb {N}}\) be the number of alternative meeting/divergence points for node i. Note that these alternative meeting points are not modelled as nodes and are not part of the graph; rather they can be seen as parameters for each node in the sets \({\mathcal {M}}\) and \({\mathcal {D}}\). Also, note that some of these alternative points may, in real life, correspond to the same location, in which case the travel time and distance between them is zero. Next, define a vector of integer variables \(m = \left[ m_1 \,\,\, m_2 \,\,\, \dots \,\,\, m_{\nu +2n+1}\right]\), where \(m_i\in \{1,2,\ldots ,N_i\}\) is the chosen meeting/divergence point alternative for node i. Thus, m is part of the optimization decision variables specifying the meeting point selection.

The formulation ensures that each customer is picked up only once and is dropped off at the destination by imposing (18) and (19). Furthermore, a vehicle has to start at its corresponding starting point and ends its route at the depot as enforced by (20) and (21). Constraint (22) provides a lower bound on the arrival time of a vehicle at a node and (24) ensures that the drop-off occurs after the corresponding pick-up. Note that the lower bound (22) allows \(u_i^k\) to be zero if vehicle k never visits node i. Finally, (23)–(25) are constraints for the passenger load of each vehicle.

The first summation in the objective function is the “service level cost”. The first term penalises the “wait time”, which is defined as the difference between the arrival time and the start of a time window, and the second term penalises the “late time”, defined as the difference between the arrival time and the end of a time window. The parameters \(\alpha\) and \(\beta\) are introduced to enable various polynomial forms of penalty terms. For instance, a quadratic term (\(\alpha =2\)) can be used to penalize longer wait/late times more than short wait/late times. With this formulation, the time windows are treated as penalty terms instead of hard constraints, which is different to typical formulations in the literature (Bent and van Hentenryck 2004; Cordeau and Laporte 2007; Ropke and Cordeau 2009; Baldacci et al. 2011).

The first term in the second summation is the capital cost of each vehicle used. Recall that the formulation enforces that all vehicles start at their own starting points and end at the depot due to (20) and (21). However, if a vehicle k is actually unused, its starting point (Node k) coincides with the depot location (Node 0) and it will not incur a capital cost according to (22), in a sense that it allows \(u^k_0 \ge 0\). Thus, the optimization would naturally choose \(u^k_0 = 0\). Finally, a route length minimization is taken into account by the last term of the objective function.

As mentioned in Section 3.5, the optimization problem (14)–(25) is solved heuristically with Algorithms 4 and 5.

Results for the MP meeting point and DS doorstep case