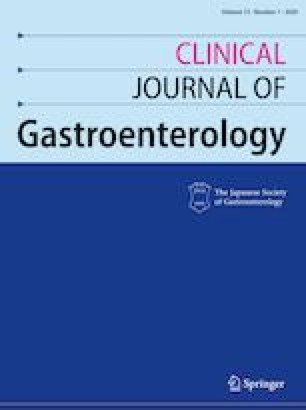 Acute liver failure (ALF) associated with malignant infiltration of the liver is rare and its pathological and radiologic features remain poorly described. An 87-year-old man was admitted to our hospital for anorexia for several days, high-grade fever from the previous day, and liver dysfunction but suddenly died on day 3 of hospitalization due to ventricular fibrillation. The patient was diagnosed at autopsy with malignant diffuse large B-cell lymphoma. To the best of our knowledge, this report represents a valuable addition to the ALF literature describing a case of ALF associated with diffuse large B-cell lymphoma diagnosed at autopsy.

Acute liver failure (ALF) is defined as the presence of encephalopathy and coagulopathy (INR > 1.5) in the absence of pre-existing liver disease, with an illness of < 26 weeks’ duration [1] and its most common causes include acetaminophen overdose, idiosyncratic drug reactions, and viral hepatitis [2]. ALF associated with malignant infiltration of the liver is rare and its pathological and radiologic features remain largely unclear. We herein report a case of ALF associated with diffuse large B-cell lymphoma diagnosed at autopsy.

Our case has two important clinical implications. First, diffuse large B-cell lymphoma may present as ALF. ALF associated with malignant infiltration of the liver is rare and its pathological and radiologic features remain poorly described.

Defined as the presence of encephalopathy and coagulopathy (INR > 1.5) in the absence of pre-existing liver disease, ALF is reported to last for < 26 weeks [1], most commonly due to acetaminophen overdose, idiosyncratic drug reactions, and viral hepatitis in Europe and the United States [2]. According to the Japanese diagnostic criteria, ALF is diagnosed in patients with a prothrombin time equivalent to INR of 1.5 or more due to liver injures sustained within 8 weeks of onset of disease symptoms [3], most commonly due to viral hepatitis and circulatory disturbances [4]. To date, the incidence of ALF secondary to hematological malignancies is reported to be only 0.47% (9/1910) in a multicenter study [1] and 0.44% (18/4020) in a large single-center study [5], with the overall mortality from ALF due to malignant infiltration of the liver being 85% and 94% and the median time to death following admission being 12 days (range 6–28) and 6 days (range 1–51), respectively. Recently, Nakao et al. reported the incidence of ALF due to infiltration of malignant cells as 1.81% (29/1603) in a nationwide survey of ALF conducted in Japan [4].

In the present case, an autopsy examination revealed the spread of malignant lymphoma to multiple lymph nodes, as well as to the spleen, liver, lung, and prostate, suggesting that the malignant lymphoma had already infiltrated multiple organs by the time of onset of ALF. On day 3 of hospitalization, with his hyperthermia shown to be persistent, the patient developed tachycardia at 97 bpm and tachypnea at 27/min suggesting systemic inflammatory response syndrome (SIRS). Based on the negative blood culture results obtained later, DIC due to ALF associated with diffuse large B-cell lymphoma was thought to be the cause of death in our patient. As such, this report is a valuable addition to the ALF literature describing a case of ALF associated with diffuse large B-cell lymphoma diagnosed at autopsy.

While there have been a few case reports showing that long-term survival could be achieved with chemotherapy in patients with ALF [8, 11, 15] and that the diagnosis of ALF is facilitated by liver biopsy, bone marrow biopsy, and gastric biopsy (Table 1), Rich et al. highlighted the importance of early tissue sampling through liver biopsy [1], suggesting that early diagnosis by biopsy and treatment are crucial for survival in patients with ALF. However, liver biopsy should be carefully considered in ALF patients depending on their risk of complications, which may have been increased with coagulopathy and thrombocytopenia.

The second implication of our case is that CT revealed no distinct nodules or masses in the liver but multiple hypodense lesions in the spleen. It has been reported that radiographic studies are typically notable for the absence of large mass lesions and reveal only a nodular liver in some cases that may be described as pseudocirrhosis, given that fulminant presentations are commonly associated with diffuse intra-sinusoidal infiltration [1]. Additionally, hepatosplenomegaly and lymphadenopathy may also be seen on CT [1, 5], and the CT findings are shown to be similar in the ten cases reported to date (Table 1). While two cases of multiple hypodense splenic lesions have been reported in ALF associated with malignant lymphoma, no pathological examination has been performed in these cases [10, 16]. Of note, a pathological examination in our case clearly revealed that the multiple hypodense splenic lesions detected were metastatic lesions of the primary malignant lymphoma. This finding, including the presence of lymphadenopathy on CT, may prove helpful in predicting the presence of ALF associated with malignant lymphoma.

In conclusion, diffuse large B-cell lymphoma presented as ALF. ALF associated with malignant lymphoma should be suspected in patients with ALF in the absence of distinct nodules or masses in the liver but in the presence of multiple hypodense lesions in the spleen or lymphadenopathy on CT.

KK, NK, KM, SM, MT and MK contributed equally to the study and to preparation of the manuscript.

The authors have no conflicts of interest to disclose in association with this study.