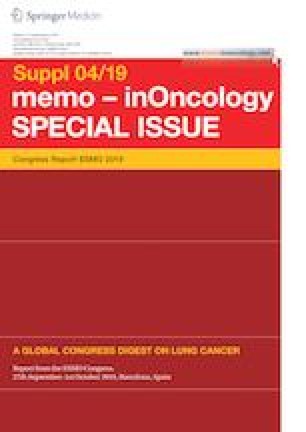 With fewer than 100 cases described in the English literature so far, Langerhans cell sarcoma represents an orphan malignant disease deriving from histiocytic cells. Clinical course is extremely aggressive and associated with poor survival rates, especially in disseminated condition. Herein, we describe the case of a young patient with fulminant development of metastatic Langerhans cell sarcoma, who achieved persistent remission after polychemotherapy and subsequent high-dose chemotherapy with autologous stem cell transplantation.

A 55-year-old woman first presented to a different department in August 2017 due to persistent cough with sputum, loss of weight and night sweat since one month. Medical history comprised bronchial asthma and positive smoking status with 15 pack–years. Arterial oxygen saturation was lowered and chest X‑ray revealed micronodular pulmonary lesions atypical for an infection. In the computer tomography (CT) scan of thorax and abdomen multiple, partly confluating lesions in the lungs (Fig. 1a), liver and pancreas were detected, as well as suspicious peritoneal and osseous metastases.
In fluorodeoxyglucose positron emission tomography computed tomography (FDG PET CT) neoplastic retention was shown in countless, disseminated pulmonary, peritoneal, osseous and lymphatic lesions (Fig. 2a). Aspiration biopsy from the right lower lobe was conducted by means of bronchoscopy (Fig. 3a). However, cytology could not affirm malignant cells and testing for tumor markers was negative. Finally, a cervical lymph node was extirpated for further analysis. Immunohistochemistry revealed dense foci of CD68-positive histiocytic tumor cells and multinuclear giant cells of Langerhans type (Fig. 3b). Staining for TTF‑1, p40, Melan‑A, HMB45, CD20, CD3, CD21 and CD123 was negative; however S100 and CD1a were positive (Fig. 3c,d). Meeting the criteria of malignant cells, the scarce diagnosis of Langerhans cell sarcoma was made. FoundationOne® analysis revealed genomic alterations in MAP2K1 (MEK1), PTEN (loss), CXCR4, FAS (loss exons 2–9), SMARCA4, TNFRSF14 and TP53 without therapeutic implication. Tumor mutation burden (TMB) was low and BRAF was wildtype. Ki-67 accounted for 70% correlating with a rapid clinical course of disease. A transfer to our department took place after lymph node extirpation. From date of first presentation to introduction of therapy (lagtime 40 days), the patient developed an oxygen demand of six liters per minute.

Critical discussion and review of the literature

Langerhans cell sarcoma (LCS) is a rare malignant disease deriving from antigen-presenting cells within the histiocytic system [1]. Given its extreme scarcity with less than 100 cases reported in the English literature so far, there is a lack of evidence regarding the most appropriate treatment regimen [2].

In contrast to Langerhans cell histiocytosis (LCH), LCS is characterized by an aggressive clinical course and overtly malignant cytologic features [3]. The most frequent sites of presentation are lymph nodes (75%), followed by the skin (50%), lung, liver, and spleen [2]. Langerhans cells typically show longitudinally grooved nuclei and Birbeck granules and are confirmed by positive immunohistochemical staining for CD1a, CD207 (Langerin) and S‑100 protein [4]. Overall survival in patients with LCS is reported for 58% at 1 year and 28% at 5 years. With increase of tumor burden survival rates even deteriorate significantly. Until now, no case achieving 5‑year survival in disseminated disease has been described [2].

As it comes to treatment options (Table 1), multimodality therapy seems to be beneficial. In patients with single-site involvement (33%) or locoregional disease (26%) complete surgical excision is recommended. In case of positive resection margins, immunosuppression, or simultaneous hematological disease, adjuvant chemotherapy or combined chemoradiotherapy seems to be effective. For patients with disseminated disease (41%) high-dose chemotherapy and autologous stem cell transplantation appears to be a reasonable and potentially curative treatment option. However, so far only a few cases of stem cell transplantation in LCS have been reported, three of which achieved complete remission [5, 6, 7].
Table 1

Langerhans cell sarcoma is an extremely rare disease associated with poor clinical outcome. Due to a lack of data, standard treatment regimens have not been established yet. With this case report, we want to emphasize the role of high-dose chemotherapy and autologous stem cell transplantation as a curative treatment option for patients with disseminated disease. In addition, the case supports the necessity for a rapid clarification of diagnosis in such situations.