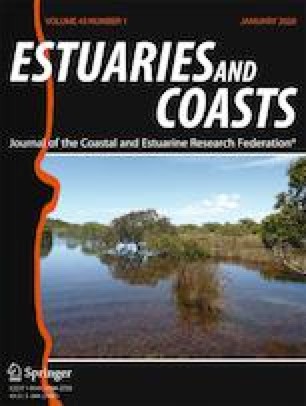 Communicated by Paul A. Montagna

Communicated by Paul A. Montagna

Hurricanes are natural disturbance events that can cause extensive damage to coastal infrastructure and result in major alterations of water quality, biogeochemistry, and ecological conditions in coastal regions and estuaries. These damages occur in response to hurricane-associated strong winds (maximum sustained winds can exceed 252 km/h), storm surges, heavy rainfall, flooding, and storm water runoff. Analyses of global hurricane data indicate a 30-year trend toward more intense and frequent hurricanes, which is likely linked to global climate change (Emanuel 2005; Webster et al. 2005; Balaguru et al. 2018; Bhatia et al. 2019). Understanding the impacts of individual hurricanes and cumulative impacts of recurring hurricanes on the resilience and resistance of coastal and estuarine systems is essential for natural systems management (Pruitt et al. 2019). This is especially true in regions where extensive urbanization has resulted in highly managed natural systems (e.g., in the Everglades). Extreme disturbances can easily postpone, halt, or even reverse these efforts (Morrison et al. 2006; Paerl et al. 2006, 2018). Therefore, knowing how natural and human-altered systems respond to natural disturbances can help to formulate appropriate strategies for ecosystem restoration and management in the systems affected by more frequent and intense natural disturbances.

The 2017 hurricane season in the North Atlantic Basin was the most active since 2005 and the seventh most active since the beginning of consistent hurricane data recording in 1851 (NOAA 2017). A total of seventeen named storms formed in this Basin in 2017, ten of which became hurricanes and six became major hurricanes (category 3 or higher; NOAA 2017). Three of the major hurricanes had particularly devastating ecological and human tolls, with pronounced impacts on the coasts of Texas (Hurricane Harvey: Blake and Zelinsky 2018), the southeastern USA (Hurricane Irma: Cangialosi et al. 2018), and several Caribbean islands, including the US Virgin Islands and Puerto Rico (Hurricanes Irma and Maria: Pasch et al. 2019; Fig. 1).

This special issue contains scientific papers describing the effects of hurricanes Harvey, Irma, and Maria and/or the cumulative impacts of multiple 2017 hurricanes on coastal and estuarine systems in the Caribbean and the Gulf and South Atlantic coasts of the USA, including coral reef, seagrass, mangrove, marsh, and coastal upland habitats. The studies span trophic levels ranging from primary production up to apex predators, and many examined the impact of hurricanes on coastal management efforts. These papers incorporate the concepts of ecosystem resistance, resilience, and restoration into synergistic discussions relevant to resource managers, policymakers, governmental entities, practitioners of restoration, and academics. These studies are timely in that there has been an explicitly stated call for further study and deeper understanding of hurricane impacts on ecosystems as well as management responses to those impacts (Pruitt et al. 2019).

Information presented in this special issue improves our understanding of the resistance and resilience of natural and human-altered coastal and estuarine ecosystems to natural disturbances. Readers can find ideas about strategies and opportunities for ecosystem-based coastal protection and management in coastal regions that are prone to hurricanes. This issue also provides insight into how ecological restoration can improve resilience and/or resistance to extreme perturbations such as hurricanes.