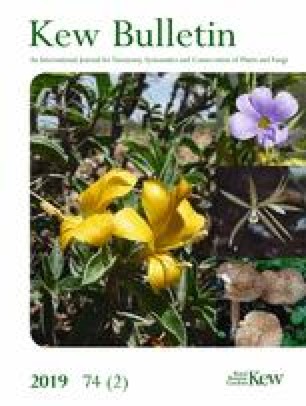 Two new species of Cyrtandra (Gesneriaceae) are described; one apparently endemic to Yapen Island, Tanah Papua, the other present in Tanah Papua and in Papua New Guinea: both species are described and illustrated, and preliminary conservation assessments given. Notes on the identity of other known collections of Cyrtandra from Yapen are provided.

Cyrtandra J.R.Forst. & G.Forst. is a large genus of c. 800 species of herbs, shrubs, climbers, and small trees (Atkins et al. 2013). It is a predominantly Southeast Asian genus and is found from the Nicobar Islands in the Indian Ocean, throughout Malesia, in Taiwan and the southern Japanese islands, in northern Australia and east across Polynesia to Hawaii. It is recorded on the Asian continent only as far north as central Thailand. Its centres of diversity are New Guinea and Borneo (each with over 100 species) and the Philippines (with over 80 species) (Atkins et al. 2013). It is found in the rainforest, from sea level to over 3000 m.

The New Guinean island of Yapen in the Indonesian province of Papua is located in Cenderawasih Bay. The island has been selected as an area for priority conservation by Conservation International (Supriatna 1999), a World Wildlife Fund ecoregion (WWF n.d.), and designated as a natural reserve by the Indonesian Ministry of Forestry in 1982 for its unique bird life (Beehler 2007) and limestone and ultramafic flora (Johns 1997). Although several endemic species have been recorded (Johns 1995; Hughes et al. 2015), there has been relatively little botanical exploration on Yapen (Conn 1994; Johns 1997; Frodin 2007; van Steenis Kruseman n.d.), and certainly no prior focus on Cyrtandra. In 1923, Schlechter published his ‘Gesneriaceae Papuanae’, which included a revision of Cyrtandra across the whole of New Guinea with 54 newly described species (Schlechter 1923). Prior to this, new species had been published in various accounts resulting from major expeditions to New Guinea (Schumann & Lauterbach 1901; Lauterbach 1910; Moore 1916). Clarke’s monograph of Cyrtandra (Clarke 1883) across its distribution, only recognised five species and one variety from New Guinea. Schlechter (1923) divided 87 of the 96 Cyrtandra species he recognised into two subgenera and 14 sections, leaving nine unplaced, four of which were only noted as being new and not formally described. The subgenera were distinguished by corolla morphology; sections generally by combinations of characters. Species published from New Guinea since Schlechter (1923) have been from mountainous areas on the mainland (Burtt 1971; van Royen 1983).

To date, no Cyrtandra species have been specifically described from Yapen, and the island has not been listed in any species’ distribution notes. We have only been able to source specimens that were collected in 1939 on an expedition by van Dijk, a Dutch Forest Officer, to Yapen (Jappen) and Biak islands (van Steenis Kruseman, n.d.). Frodin’s detailed account of biological exploration of New Guinea in the ‘Ecology of Papua’ series (Frodin 2007), does list a number of earlier expeditions that went to Yapen, but many of these seem to have had a non-angiosperm focus (e.g. Crown Prince Leopold of Belgium, 1929 [only algae, lichen and mosses]; E.L.Cheeseman, 1938 – 39 [mainly entomology]), and after searching the collections at BM, E, K and L, we haven’t found any further specimens (herbarium acronyms follow Thiers [continuously updated]).

Joint fieldwork between staff of the Royal Botanic Garden Edinburgh and Universitas Papua in 2009 resulted in the acquisition of two living collections of Cyrtandra. It has not been possible to match these plants with any known species or any of the Yapen Cyrtandra specimens that we have located. Here we present a description and illustration of the two new species, C. bungahijau Bramley & H.J.Atkins and C. vittata Bramley & H.J.Atkins, as well as notes on the other Yapen collections known to us.

All available type specimens of New Guinea Cyrtandra (held at B (online), BM, E, K, L (online), P (online)) were examined to establish the identity or novelty of the collections from Yapen Island. The descriptions were based on living material in cultivation at the Royal Botanic Garden Edinburgh (RBGE), photographs of plants growing in the field, and herbarium and spirit material. All cited specimens have been seen by the authors.

The proposal for IUCN conservation categories was made following the IUCN Red List Categories and Criteria and associated guidelines (IUCN 2012).

recognition. Cyrtandra bungahijau Bramley & H.J.Atkins is most similar to C. jadunae Schltr., in section Pachycyrtandra Schltr., but can be distinguished from it by its leaf bases (decurrent vs cuneate), calyx lobes (4 mm vs 12 mm) and internal corolla indumentum (glandular hairy vs glabrous).

conservation status. Due to the lack of collecting activity on Yapen or detailed information about threat, a conservation category of Data Deficient (DD) is proposed for this species and we emphasise the need for further survey work in this area.

notes. This species falls within Schlechter’s subgenus Cyrtandra, section Pachycyrtandra. The subgenus contains those species that do not have strongly zygomorphic corollas and the section contains species with single or paired, large, densely hairy flowers and subequal well-developed leaves. The fruit of this new species has not been seen but others in this section have persistent calyces in fruit. Within the section, this new species is most similar to C. jadunae Schltr. from ‘Jaduna’ on the Waria River in Morobe Province, Papua New Guinea. Although the type of C. jadunae (Schlechter 19331) has not been found, comparison with Schlechter’s description shows that the two species share glabrous ovaries and stamens that do not exceed the corolla but differ in the leaf bases (decurrent vs cuneate), the more deeply divided calyx in C. jadunae, and variation in indumentum inside the corolla (glabrous in C. jadunae and glandular hairy in C. bungahijau).

recognition. Cyrtandra vittata Bramley & H.J.Atkins is most similar to C. minjemensis Schltr., in section Loxanthe Schltr., but can be distinguished by its striped pink and white corolla (vs purple corolla) and caducous calyx (vs persistent calyx).

conservation status. The unusual distribution pattern of this species gives a preliminary conservation assessment, using GEOCAT (Bachman et al. 2011), of LC (Least Concern) based on EOO, and EN (Endangered) based on AOO using a cell width of 2 km. We suggest that, given the lack of collecting activity across the centre of this distribution (Gideon 2015), and the consequent likely underestimation of extent, that this species is listed as Least Concern.

etymology. This species is named for the distinctive vertical stripes on the corolla.

notes. This species falls within Schlechter’s subgenus Glossophorae due to its strongly zygomorphic corolla. Within the subgenus, it can be tentatively placed in his section Loxanthe due to its mostly anisophyllous leaf arrangement, short brown indumentum, glabrous ovary, lack of outgrowth in the corolla tube and deeply divided calyx lobes. Species within this section should, however, also retain their calyx in fruit. We have only seen fruit on the cultivated plant, and in this case, the calyx is clearly caducous.

Within this section, Cyrtandra vittata most closely resembles C. minjemensis. We located two isotypes of this species (BO, P) but, unfortunately, both were sterile. We obtained permission from the Curator responsible for destructive sampling at P, Dr Myriam Gaudeul, for material from the type for DNA extraction to confirm if the type of C. minjemensis was definitely distinct from the new material but we were, unfortunately, not successful in obtaining DNA. Despite an absence of molecular confirmation, sufficient differences with the original description of C. minjemensis including corolla colour (purple vs pink and white striped) and calyx persistence in fruit persuaded us that this should best be described as a distinct taxon.

The distribution of Cyrtandra vittata (see Map 1) is unusual both in its extent and also the marked disjunction between Tanah Papua and Morobe. From our initial taxonomic work, it appears that the distributions of some Cyrtandra species in New Guinea are wider than we have found to be typical in other areas of Malesia. From the literature, and discussions with colleagues, we have found examples of species that are distributed along the northern coast of New Guinea, some continuously, such as Medusanthera laxiflora (Miers) R.A.Howard (Utteridge 2011), and others patchily such as Actinodaphne multiflora Benth. and Schefflera waterhousiae Harms. (both D. Frodin, pers. comm.). These species are all likely to be dispersed by frugivorous birds: the patchy distributions could be due to lack of botanical collections across the area (Gideon 2015), or to the route of the dispersers. Perhaps the apparent distribution of C. vittata is a reflection of lower collecting density in western Papua New Guinea and eastern Tanah Papua, and further fieldwork would result in more records of it being found. As for the dispersal of C. vittata, we have no observations, but could speculate that the fleshy white fruit is dispersed by columbiform birds, as has been suggested for dispersal of Cyrtandra species across the Pacific to the Hawaiian archipelago (Cronk et al. 2005).

The collections from both extremes of this distribution are morphologically very similar and Atkins 14, from Yapen, and de Kok 1156 and de Kok 1263 from Morobe resolve as sister in an as yet unpublished phylogeny of Cyrtandra.

Two additional collections, Takeuchi 8618, also from Morobe, and Takeuchi 11289, from Chimbu Province in the Highlands Region, are similar in having pink/red and white striped corollas and are possibly closely related but have larger, more leathery leaves and larger flowers. The corolla is significantly longer, up to 40 mm long, with filaments that far exceed the mouth of the corolla at maturity, and the nectary disk is not distinctively lower on one side.

Notes on other Yapen collections

One of the authors (GLCB) is in the process of revising Papuan Cyrtandras. The notes that follow represent our preliminary attempts to identify the other collections known to us from Yapen, and to assign them to the sections described by Schlechter (1923). Until more detailed taxonomic research is completed, using Schlechter’s work is the most practical method of specimen identification. We aim to establish whether Schlechter’s sections represent monophyletic groups through future phylogenetic studies.

We thank the curators of the herbaria cited above for access to or loan of material, and Dr Myriam Gaudeul (P) for providing material for DNA extraction from the isotype of Cyrtandra minjemensis; Claire Banks for the detailed illustrations; Sadie Barber, Lynsey Wilson and Rogier de Kok for permission to use their photographs, and Nathan Kelso and Sadie Barber for excellent care of the living collections. GLCB is grateful to Tim Utteridge and David Frodin for informative discussions on species distributions in northern New Guinea. The new taxon was collected on Yapen Island during the Papua expedition of the Royal Botanic Garden Edinburgh in 2009, in which LG and CDH were involved. LG and CDH would like to thank Kementerian Riset dan Teknologi Republik Indonesia, Lembaga Ilmu Pengetahuan Indonesia, Universitas Papua, Kebun Raya Cibodas, Balai Penelitian Kehutanan Manokwari, BKSDA Papua I Sub Seksi Pulau Yapen, authorities in Serui, people and chief of Ambaidiru village, Pak Makarius, George Argent, Andrew Ensoll, Sadie Barber and Herkilaus Rumaikewi. Financial support for the expedition was provided by the Royal Horticultural Society, the Merlin Trust, Royal Botanic Garden Edinburgh Members’ Committee, Royal Botanic Garden (Sibbald) Trust and the James & Eve Bennett Charitable Trust.