The Journal of Geometric Analysis 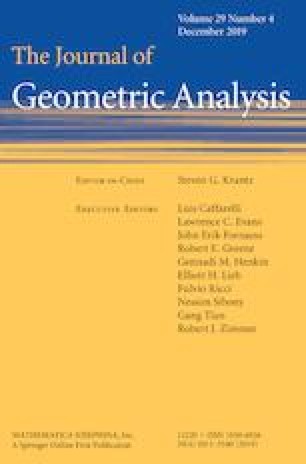 The Journal of Geometric Analysis

In the paper we study properties of symmetric powers of complex manifolds. We investigate a number of function theoretic properties [e. g. (quasi) c-finite compactness, existence of peak functions] that are preserved by taking the symmetric power. The case of symmetric products of planar domains is studied in a more detailed way. In particular, a complete description of the Carathéodory and Kobayashi hyperbolicity and Kobayashi completeness in that class of domains is presented.

The starting point for considerations in the paper was inspired by recent developments on the function theory in symmetric powers (see e. g. [2, 3] and [4]).

First we present a more general result to that of Theorem 1.4 in [2] where the proof of the Kobayashi completeness of symmetric powers of some of Riemann surfaces relies on the proof of existence of peak functions. Similarly as in [2] the presentation below actually deals with a stronger version of completeness—the c-finite compactness and shows that the notion (more precisely, the weaker notion of quasi c-finite compactness) is preserved under taking the symmetric power, which is done in a general case of complex manifolds (Theorem 1). Following the same line of argument relying upon analoguous results in the symmetrized polydisc, we present a result on the existence of peak functions in symmetric powers (Theorem 6).

In Sect. 3, we concentrate on properties of symmetric products of planar domains in \(\mathbb {C}\). We show the linear convexity of such domains (Proposition 9), we present a Riemann-type mapping theorem for them (Theorem 12) and then we discuss to which extent the Kobayashi hyperbolicity (completeness) is preserved under taking the symmetric power—a complete description of Kobayashi hyperbolicity (completeness) in that class is given in Theorem 16. Finally, we present a result on preserving the Carathéodory hyperbolicity under taking the symmetric powers of planar domains (Proposition 18).

In this Section, we present results for a general class of symmetric powers of manifolds.

If, on some complex structure X (e. g. a complex manifold), we may well-define the Carathéodory pseudodistance we call Xquasic-finitely compact if for any sequence \((z_k)_k\subset X\) without the accummulation point we have \(c_X(z_1,z_k)\rightarrow \infty \). Recall that if X is additionally Carathéodory hyperbolic , i. e. \(c_X(w,z)>0\), \(w,z\in X\), \(w\ne z\) then X is called c-finitely compact. As to the basic properties related to the Carathéodory pseudodositance (as well as to other holomorphically invariant functions) we refer the Reader to e. g. [9, 11].

As we shall see below a natural property that is inherited by the symmetric power is the quasi c-finite compactness.

the observation in the next remark shows that it is not true in general.

In fact, put \(D:=\mathbb {C}\setminus \{0,1\}\), \(n=2\). Then
$$\begin{aligned} S_2(D)=\mathbb {C}^2\setminus (\mathbb {C}\times \{0\}\cup \{(\lambda +1,\lambda ):\lambda \in \mathbb {C}\}). \end{aligned}$$
(10)
The last is the space \(\mathbb {C}^2\) with two complex lines intersected which is affinely isomorphic with \(\mathbb {C}_*^2\) for which the Kobayashi pseudodistance vanishes. In the sequel we shall present a complete description of the Kobayashi hyperbolicity, Kobayashi completeness, Carathéodory hyperbolicity and c-finite compactness in the class of symmetric products of planar domains.

The assumption in Theorem 6 is a weaker one than that in the proof of Theorem 1.4 of [2].

In this section we present properties of symmetric products of planar domains.

Recall that a domain \(\Omega \subset \mathbb {C}^n\) is called linearly convex if for any \(w\in \mathbb {C}^n\setminus \Omega \) we may find an affine hyperplane H passing through w and disjoint from \(\Omega \). Following step by step the idea from [15] we get the linear convexity of \(S_n(D)\).

We show how some properties of D induce the same ones of \(S_n(D)\) (compare Theorem 1). The first notion that we discuss is the hyperconvexity.

In the next result we show a Riemann-type mapping theorem for symmetric powers of planar domains.

3.3 Kobayashi Hyperbolicity and Completeness of Symmetric Products of Planar Domains

We already know that representations of symmetric products of planar domains are linearly convex. It is worth mentioning that a bounded linearly convex domain \(\Omega \subset \mathbb {C}^n\) is automatically Kobayashi complete—as mentioned by N. Nikolov to the author it follows directly from Lemma 3.3 in [16].

The above proposition allows us to conclude that a domain \(S_n(D)\) is Kobayashi complete if \(D\subset \mathbb {C}\) is bounded. In the unbounded case we should be more careful. Below we present a complete description of Kobayashi hyperbolicity and completeness of symmetric products of planar domains. We start with the special case.

Then the theorem on Kobayashi completeness of the complement of the unions of \((2n+1\)) hyperplanes in general position in the projective space (see [8, 11]) and results on non-hyperbolicity of complements of 2n hyperplanes (see [10] and [17] or [11]) finish the proof. \(\square \)

As we saw in the proof of Theorem 16 the description of Kobayashi complete symmetric products of planar domains relied not only on the linear convexity of \(S_n(D)\) but also on the special geometry of \(S_n(D)\). It could be interesting to see whether the following could be true: a linearly convex domain, which admits a certain number (at least 2n) of hyperplanes in a general position disjoint from the domain, is Kobayashi complete.

It turns out that in the class of symmetric products of planar domains the Carathéodory hyperbolicity is preserved under taking symmetric powers.

The author was partially supported by the OPUS Grant No. 2015/17/B/ST1/00996 financed by the National Science Centre, Poland.