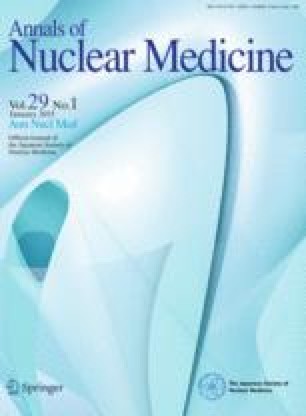 The aim of this study was to evaluate the effect of the point spread function (PSF) and time of flight (TOF) on PET/CT images of overweight patients in relation to the iteration number and the acquisition time.

This study consisted of a phantom study and a clinical study. The NEMA IEC body phantom and a 40 cm diameter large phantom (LG phantom) simulating an overweight patient were used in this study. Both phantoms were filled with 18F solution with a sphere to background ratio of 4:1. The PET data were reconstructed with the baseline ordered-subsets expectation maximization (OSEM) algorithm, with the OSEM + PSF model, with the OSEM + TOF model and with the OSEM + PSF + TOF model. The clinical study was a retrospective analysis of 66 patients who underwent 18F-FDG PET/CT. The image quality was evaluated using the background variability (coefficient of variance, CVphantom and CVliver) and the contrast (CONTHOT and SNR).

The combination of the PSF and TOF correction improved the image quality of the LG phantom and overweight patients.

18F-fluoro 2-deoxy-d-glucose (FDG) positron emission tomography (PET) is useful for diagnosis, tumor staging, monitoring of response to therapy and for prediction of prognosis in a variety of tumors [1, 2, 3]. The image quality of PET/CT images is important to correctly diagnose cancer [4]. However, the PET image quality of overweight patients is often poor resulting in increased image noise because of the increase in photon attenuation and the scatter fraction [5]. Such images are sometimes difficult to be diagnosed with lower confidence of the reader [6]. For improving the image quality in such patients, either an increase of the injected dose of radiopharmaceuticals or an elongation of acquisition times is generally considered to be important. However, the increase of the injected dose of FDG is difficult in some institutions when the commercially distributed FDG is used. Therefore, the acquisition time has been reported to be an especially important parameter [6, 7]. However, the extension of the acquisition time is burden for patients and is also inefficient for institutions.

A National Electrical Manufacturers Association (NEMA) International Electrotechnical Commission (IEC) body phantom (NEMA phantom) and a 40 cm diameter large phantom (LG phantom) were used in this study. The length of major axis of the NEMA phantom was 30 cm. The inner diameter of the hot spheres was from 10 to 37 mm (10, 13, 17, 22, 28 and 37 mm).

The LG phantom was originally designed for this study (Chiyoda Technol, Tokyo, Japan and YAMATO Jushi Inc, Tokyo, Japan) (Fig. 1). The diameters of the outer and inner layers were 40 and 34 cm, respectively. The thickness of the outer layer was 2 cm. The circumference was 126 cm, which is compatible to the waist of patients simulating about a 100 kg body weight person [17].

This clinical study was approved by the ethics committee of our institution. This study was retrospective in nature, and its results did not influence any further therapeutic decision-making.

All data were acquired using the Biograph mCT scanner (Siemens Healthcare, Erlangen, Germany). The system timing resolution was 555 ps and the coincidence timing window was 4.1 ns. The crystal was combined lutetium oxyorthosilicate (LSO) detectors (4 × 4 × 20 mm3). The number of blocks per detector ring was 48 and the total number of blocks was 144. The system sensitivity was 5.4 cps/kBq [18]. Scanning parameters for CT were as follows: 120 kV, 100 mA, 5-mm slice thickness, 0.5 s rotation. The CT data were used for the attenuation correction.

The phantom data acquisition was performed in 3-dimensional (3D) mode for 20 min in listmode. On the other hand, the clinical data acquisition was performed in whole body 3D mode for 2 min per bed position with an overlap of 50 %. All patients fasted for at least four hours before FDG administration. The patients with high fasting blood sugar (blood sugar ≥150 mg/dL) were excluded. Emission scans from the mid-thigh to the top of the head were started at 1 h after injection of 226.2 ± 49.3 MBq (range 135.9–317.5 MBq) of FDG (Nihon Medi-Physics Co., Ltd., Tokyo, Japan). The injected dose was 3.97 ± 1.26 MBq/kg.

Since the 10 mm hot sphere was not visually recognized in some images, the quantitative analysis was performed using a 13 mm hot sphere. The visibility of hot spheres was assessed by a nuclear medicine physician and 2 radiological technologists. The visibility was classified into 3 grades (2: identifiable, 1: visualized but similar hot spots were observed elsewhere, 0: not visualized). A score of 1.5 is considered to represent a clinically interpretable study [19].

The CVphantom, CVliver, CONTtumor and SNR of each reconstruction method were compared using paired t test, Wilcoxon signed-rank tests and Student’s t test. In this analysis, P < 0.05 was considered to indicate statistical significance.

In this study, we developed a large body phantom to examine the effects of the PSF and TOF on the PET image quality for simulated overweight subjects. The CVphantom of the LG phantom was higher than that of the NEMA phantom. Both a good CONT13mm and CVphantom of the LG phantom were obtained with a short acquisition time using the OSEM + PSF + TOF. The CVliver in the overweight patients was decreased by the OSEM + PSF + TOF. The SNR was similarly increased between two patient groups.

The CV is known to vary with body weight [20]. The NEMA phantom represents standard body size patients simulating patients with a 60 kg body weight and 84 cm waist [21]. In the present study, we originally designed a large phantom simulating patients with a body weight of approximately 100 kg and a waist circumference of 126 cm [17]. Nagaki et al. [20] observed that the noise of overweight patients was larger than that of normal weight patients. They reported that the CVliver of PET images for 60–74 kg patients was 10.98 %, and that for patients over 75 kg was 14.15 %. Our results showed that the CVphantom of the LG phantom was almost twice of that of the NEMA phantom.

This study had some limitations. First, we examined only one phantom simulating a patient with 100 kg body weight. A phantom study using some different sizes of phantoms may be required. Second, the LG phantom used in the study is circular though the body shape of most subject is elliptical. Third, the number of patients heavier than 100 kg was limited in our study. Further examinations with such patients are expected to enhance the advantages of the PSF and TOF information for overweight patients. Fourth, we did not evaluate the lesion detectability. Fakhri et al. reported that the effect of TOF information was large for higher BMI. Therefore the overweight patients were considered to show the great effect of TOF information [19, 25]. Clinical examinations to assess the lesion detectability in overweight patients will be necessary to confirm the clinical usefulness of the PSF and TOF information.

In conclusion, our results indicated that the OSEM + PSF + TOF improved the PET images of a LG phantom, and is thus considered to be useful for achieving good image quality in overweight patients.

The authors thank the staff of the Department of Clinical Radiology and Medical Technology at Kyushu University Hospital for their valuable clinical support. No potential conflicts of interest were disclosed.

© The Japanese Society of Nuclear Medicine 2014