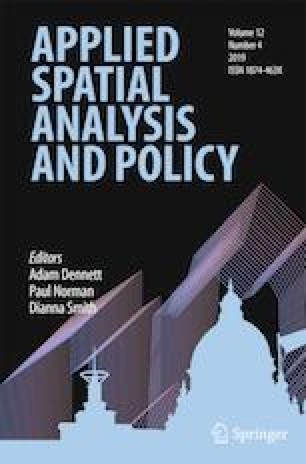 Residential rents are analysed in the Walloon region in Belgium. In this region, affected by urban sprawl, households rent accommodation in urbanised areas as well as in their peripheries. While there is no statistical difference between the average observed rents per square meter in urban agglomerations and suburbs, does it mean that these areas compose a single market with identical rent determinants? Or that the same level of rents is determined by different drivers? The paper analyses the regional territorial structure and aims at determining the geographical rental submarkets based on urban / peri-urban delimitation. Traditional ordinary least squares (OLS) and geographically weighted regression (GWR) techniques are applied. With the latter method, the spatial autocorrelation in the residuals decreases, but remains significant. Particular attention is payed to the spatial distribution of the GWR coefficients. The Chow test and the weighted standard error provide an evidence of the existence of spatial-structural submarkets in the agglomerations and in the peri-urban areas in the biggest residential urban complexes of the region. The calculated market rent of a hypothetical standardized dwelling reveals a substantial dissimilarity between two areas: the rent of a typical dwelling is higher in peri-urban zones, up to 43.5% according to the OLS and up to 17.7% according to the GWR. With more recent dataset, we found that this tendency, which contradicts the classical urban theory, increases in time.

The 99 observations with the negative estimates for NbBath are geographically concentrated to the west of the Charleroi RUC and to the east of the Liège RUC. These observations have lesser living area than the average (74 m2 versus 83 m2). Among these observations, only 2 have no bathrooms and 6% have at least two bathrooms (this proportion corresponds to the average).

The 175 observations with the negative GWR estimates for NbWC are geographically located in three areas: in the city of Liège (88 observations), in the centre of Brabant Walloon (23 observations in Ottignies-Louvain-la-Neuve and 19 observations in its neighbouring Wavre) and, to lesser degree, in Mons. These dwellings are not large (72 m2 on average). Among them, only 3 observations have no WC and 8% have at least two bathrooms (this proportion is a bit higher than the average).

As for the cases with extremely negative coefficients for NbWC that are lesser than −0.05 (90 observations), there are many apartments (73%), the proportion of dwellings with at least two bathrooms (8%) is a bit higher than the average and the proportion of dwellings with at least two WC is similar to the average. Also, there are 7 observations with at least two bathrooms and 17 observations with at least two WC located in Liège, Ottignies-Louvain-la-Neuve and Wavre. In line with the aforementioned explanation (for NbBath), the negative GWR coefficients for NbWC can “compensate” too strong positive impact of the coefficients for NbBath, especially for the cases of combined bathroom/WC. The additional hypothesis is that in the UCL university campus (the biggest in Wallonia) located in Ottignies-Louvain-la-Neuve, as well as in the accommodations rented by students and researchers in the proximity, bathrooms and/or WC can be shared by several residential units. This can refer to the first as well as to the second bathroom or WC.