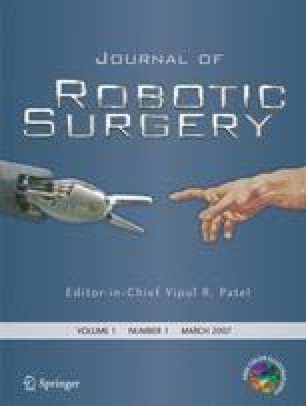 Cancer of the prostate is the most common malignancy of the male genito-urinary tract. Although a number of treatment options are available for early prostate cancer, radical prostatectomy has provided the best opportunity for long-term cure.

Over the last decade, the technique of radical prostatectomy has evolved significantly as an increased understanding of prostate anatomy, improved technology and new techniques have refined the procedure. While outcomes have improved significantly, open surgical excision is still associated with certain inherent morbidities [1]. As such, patients and surgeons have explored less invasive surgical options.

One such option is robotic-assisted laparoscopic radical prostatectomy (RALP). It was first reported in Germany in 2001 by Binder [2] and then refined in the USA by Menon et al. [3, 4]. During the last decade; robotic prostatectomy has become the backbone of robotic surgery in urology. Robotic prostatectomy is viewed as the most natural application, as the small-wristed instrumentation and the magnified three-dimensional view have provided significant advantages while working deep down in the pelvis.

Today, the most commonly used robotic system in the USA is the da Vinci Surgical System™ (Intuitive Surgical, Sunnyvale, CA, USA). The da Vinci™ aids the performance of RALP for several reasons:In this article we outline The Ohio State University technique of robotic radical prostatectomy.

Our technique is based on standard laparoscopic [7] and robotic technique [3] described previously; however, our technique differs based on how we perform the dorsal vein stitch, the suspension stitch, early retrograde dissection of the neurovascular bundle and continuous anastomosis described by Van Velthoeven. This article is supported by an online video link on the website of the Journal of Robotic Surgery.

Step 1: Incision of the peritoneum and entry into the retropubic space of Retzius

A transverse peritoneal incision is made through the median umbilical ligament (Fig. 1) and is extended on both sides in an inverted U fashion to the level of the vasa on either side. The assistant and the fourth arm provide the counter-traction. The peritoneum is dissected to the following boundaries: the pubic bone superiorly, the median umbilical ligaments laterally, and the vas deferens inferolaterally (Fig. 2). The key step is to find the pubic tubercle and follow it laterally to the vasa. It is important to dissect the peritoneum all the way up to the base of the vasa for optimum release of the bladder to allow tension-free vesico-urethral anastomosis.

Step 2: Incision of the endopelvic fascia (EPF) and identification of the dorsal venous complex (DVC)

The important landmarks are bladder neck, base of the prostate, levator muscles and apex of the prostate (Fig. 3). Once adequate exposure has been obtained, the EPF is opened immediately lateral to the reflection of the puboprostatic ligaments bilaterally. The EPF is best opened at the base of the prostate using cold scissors. This is the area with the largest amount of space between the prostate and the levators and the point at which the prostate has most mobility. Proceeding from the base to the apex, the levator fibers are pushed off of the prostate until the DVC and urethra are visualized (Fig. 4). Dissect only that which is necessary to get in a good DVC stitch. Extensive dissection of the apex at this time can lead to unnecessary and obtrusive bleeding. The full apical dissection is best performed at the end of the procedure.

Step 3: Ligation of the DVC

Robotic needle drivers are placed via the robotic ports. Many different sutures and types of needles are used for this purpose; however, we have tended to use a large needle with a non-braided absorbable suture such as Caprosyn on a large CT1 needle. We hold the needle about 2/3 back at a slight downward angle and place the needle in the visible notch between the urethra and DVC (Fig. 5). The needle is pushed straight across at 90° and then the wrist is turned to curve around the apex of the prostate. The suture strength needs to be sufficient to allow the needle holders to pull up tight and perform a slip knot. We prefer to use the slip knot as it prevents the suture from loosening as it is tied. In addition we place a second suture to suspend the urethra to the pubic bone and secondarily ligate the DVC. The DVC is encircled and then stabilized against the pubic bone along with the urethra (Fig. 6).

The laparoscope is then changed to a 30° down-facing lens for the bladder neck dissection. This lens is optimal to see inferiorly and to visualize the correct planes. Visual clues are of supreme importance and are used to guide the dissection. The bladder neck is identified by a cessation of the fat extending from the bladder at the level of the prostato-vesical junction (Fig. 7). Another technique is to pull on the urethral catheter and visualize the balloon. However, this can be unreliable and misleading after transurethral resection of prostate (TURP) or with a median lobe or large prostate. The robotic arms also provide a moderate amount of visual and sensory feedback to facilitate localization of the boundaries. The bladder is dissected off the prostate in the midline using a sweeping motion of the monopolar scissor while visualizing the bladder fibers. The key is to stay in the midline to avoid lateral venous sinuses till the anterior bladder neck is opened and then dissect on either side of the bladder neck. Once the anterior urethra is divided, the Foley catheter is retracted out of the bladder using the fourth arm, and upward traction is applied to expose the posterior bladder neck (Fig. 8).

The posterior bladder neck dissection is generally considered to be the most challenging aspect of the operation for the novice robotic surgeon. The difficulty is in appreciating the posterior tissue plane between the bladder and prostate and the direction and depth of dissection necessary to locate the seminal vesicles.

Once the initial portion of the posterior dissection is complete and the bladder has been dissected off the prostate, the vasa and seminal vesicles can be identified. The thin fascial layer over the seminal vesicles and vasa should be opened to free the structures for retraction. The fourth arm is used to retract the vasa superiorly. Both vasa are then incised, and the inferior portion of the vas is retracted by the assistant (Fig. 11). The vas is then followed posteriorly to expose the tips of the seminal vesicles. Small perforating vessels are cauterized with the bipolar grasper and divided or clipped with a 5 mm clip (Fig. 12).

It is important to dissect the seminal vesicles all the way to the base to allow for appropriate elevation of the prostate and identification of the posterior Denonvillier’s fascia (Fig. 13). The incision of Denonvillier’s fascia is made at the base of the seminal vesicles. The correct plane can be identified by the presence of a clear pearly white plane that is relatively avascular between the posterior prostatic capsule and the rectum. When entered correctly, the plane is avascular and spreads easily with the Maryland dissector with minimal bleeding.
The posterior space is dissected widely to fully release the prostate and facilitate rotation during the nerve sparing (Fig. 14).

Our approach to the nerve sparing part of the dissection is relatively unique as we perform it in a retrograde manner, mirroring the open approach. The technique involves incision of the periprostatic fascia at the level of the apex and midportion of the prostate (Fig. 15). Gentle spreading of the tissue on the lateral aspect of the prostate will allow the prostatic capsule and the neurovascular bundle (NVB) to be identified. No thermal energy is used during dissection of the NVB or ligation of the pedicle. At the apex of the prostate a plane between the NVB and prostate capsule can be identified and separated (Fig. 16). The NVB is then released in a retrograde manner towards the prostatic pedicle. The NVB is stabilized with the Maryland dissector and the prostate is gently stroked away using the scissors. The plane between the NVB sheath and the prostate capsule is relatively avascular, consisting of only small tributary vessels, therefore no energy or clipping is required close to the path of the NVB. As the dissection proceeds in a retrograde fashion the NVB can clearly be seen being released off of the prostate. The prostate pedicle can then be thinned out with sharp dissection and the path of the NVB clearly delineated at this level. The clear definition of the anatomy allows the placement of two clips on the pedicle away from the NVB and sharp incision to release the prostate completely (Fig. 17). It is important to release the NVB to the apex of the prostate in order to prevent injury during the apical dissection.

The landmarks are the ligated DVC, urethra, apex of the prostate and NVB. It is essential to securely ligate the DVC to prevent bleeding which may interfere with the apical dissection and division of the urethra under direct vision (Fig. 18). Cold scissors are used to divide the DVC and a long urethral stump is developed, as a longer urethral stump facilitates the anastomosis and may improve continence. Complete dissection of the apex and urethra is facilitated by the robotic magnification. The urethra is then incised at the apex of the prostate under direct vision to completely liberate the prostate (Fig. 19).

The urethra and bladder are reapproximated using a continuous stitch as per the technique described by Van Velthoeven [8]. Two 17 cm 3-0 Monocryl sutures on RB1 needles of different colors are tied together with 10 knots to provide a bolster for the anastomosis. The posterior urethral anastomosis is performed first with one arm of the suture. Three passes are made through the bladder and two passes through the urethra and the suture is pulled straight up in order to bring the bladder down. The posterior anastomosis is continued in a clockwise direction from the 5 to 9 o’clock position obtaining adequate bites of tissue (Fig. 20). This is followed by completion of the anterior anastomosis with the second arm of the suture in a counterclockwise fashion (Fig. 21). The key to performing quick watertight anastomosis is to have an adequate urethral length, normal-sized bladder neck, clear operative field and perineal pressure. A Foley catheter is placed and saline is irrigated to confirm watertight anastomosis. A Jackson–Pratt drain is placed around the anastomosis and all the trocars are removed under direct vision.

While our experience with RALP now lies at over 1,300 cases the procedure continues to evolve. The progress that we have seen over the past 5 years suggests that these refinements promise to further improve surgical outcomes and reduce patient morbidity.

A video representing each portion of our described technique is available on the website of the Journal of Robotic Surgery.