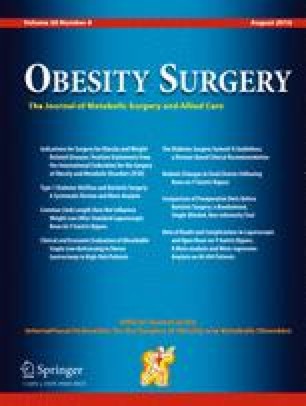 The first robotic gastric bypass was published by Horgan and Vanuno in 2001 (Horgan and Vanuno J Laparoendosc Adv Surg Tech A 11(6):415–9, 2001). The present work describes for the first time a robotic procedure to reverse OLGB into normal anatomy.

We present the video report of a 69-year-old woman suffering of severe malnutrition (weight of 42 kg, body mass index of 15.8 kg/m2, albumin 21 g/l) who had undergone laparoscopic omega-loop gastric bypass 2 years ago (initial weight of 104 kg and initial body mass index of 39.6 kg/m2). She was referred to our Bariatric Surgery Unit, and after a period of parenteral nutrition support to improve nutritional status (albumin 32 g/l), we decided in a multidisciplinary staff to perform a reversal omega-loop gastric bypass back into normal anatomy using the DaVinci Si™ system by Intuitive Surgical Inc ®, Sunnyvale, CA.

In this high definition video, we present step-by-step robotic reversal of the omega-loop gastric bypass. The procedure began with a careful adhesiolysis of the left lobe of the liver, small gastric pouch, and omega-loop. Then, the gastro-jejunostomy was transected with a 45-mm Endo GIA endocutter with purple staples. The key-point was the creation of a gastro-gastric anastomosis between the small gastric pouch and the excluded stomach. Omega-loop jejunum was resected and the anastomosis was performed in order to avoid intestinal stenosis. The operative time was 232 min. Postoperative course was uneventful and the patient was discharged in postoperative day 8. One month after the procedure, she has gained 10 kg (albumin 34 g/l) and stabilized her nutritional status without further nutritional support.

This is the first case described in the literature of a reversal omega-loop gastric bypass into normal anatomy and the first description of the use of a robotic approach. This intervention is challenging, but a feasible procedure. This technology may increase the number of surgeons who are able to provide the benefits of minimal invasive surgery to their patients without the increased risks of complications associated with initial learning curves.

The three-dimensional robotic vision, a stable camera, and the multiples degrees of freedom of the robotic instruments are the features that seem to provide greater surgical precision for these complex laparoscopic operations.

Informed consent was obtained by all individual participants included in the study.