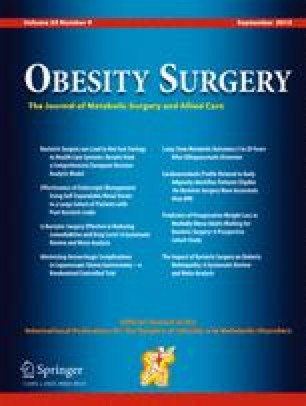 No bariatric procedure is perfect, and a plethora of such procedures itself is a proof for the same. Laparoscopic adjustable gastric banding has a high safety profile, but also a high rate of re-operation has been reported (Schouten, Wiryasaputra, van Dielen et al. Obes Surg 20(12):1617–26, 2010). Laparoscopic sleeve gastrectomy (LSG) is becoming popular, but has its own set of complications and is irreversible. We introduced laparoscopic adjustable gastric banded plication (LAGBP) in 2009 (Huang, Lo, Shabbir et al. Surg Obes Relat Dis 8(1):41–5, 2012) In a case matched comparative study with LSG, LAGBP showed similar results at 2 years in terms of weight loss, comorbidity resolution, and complications. (Huang, Chhabra, Goel et al. Obes Surg 23(8):1319–23, 2013). Several authors have reported variations in their technique, bougie size, and suture material used to perform plication. (Ramos, Galvao Neto, Galvao et al. Obes Surg 20(7):913–8, 2010, (Mui, Lee, Lam et al. Obes Surg 23(2): 179–83, 2013, Brethauer, Harris, Kroh et al. Surg Obes Relat Dis 7(1):15–22, 2011) Our initial technique of placing the band first and then plicating the stomach resulted in higher incidence of gastric fundus herniation compared to that reported in a systematic review (Abdelbaki, Huang, Ramos et al. Obes Surg 22(10):1633–9, 2012). After the first 65 cases, we reversed the order by performing the gastric plication first which ensures proper plication of the fundus and a more uniformly placed plication line. This technique has become our standard, and the same is described in this video in a stepwise fashion.

We performed LAGBP in 202 cases over the last 4 years and recorded the findings. Our standardized technique is shown in this video. The T-suspension technique was used for liver retraction. (Zachariah, Tai, Chang et al. J Laparoendosc Adv Surg Tech A 23(4):311–5, 2013) Gastric plication formula is shown in Fig. 1.

LAGBP has been proven to be an effective bariatric procedure in the midterm results. Standardization with plication first and then placement of the band could be important to achieve best outcomes.

No identifying information is available in the article:

"Additional informed consent was obtained from all individual participants for whom identifying information is included in this article.”—does not apply.

All procedures performed in studies involving human participants were in accordance with the ethical standards of the institutional and/or national research committee and with the 1964 Helsinki Declaration and its later amendments or comparable ethical standards.

This article does not contain any studies on animals performed by any of the authors.

This is a retrospective studies, for this type of study formal consent is not required.

Jasmeet Singh Ahluwalia has no conflict of interest.

Hsin-Chih Kuo has no conflict of interest.

Po-Chih Chang has no conflict of interest.

Po-Lin Sun has no conflict of interest.

Kuo-Chuan Hung has no conflict of interest.

Chih-Kun Huang has no conflict of interest.

There is no external source of funding.