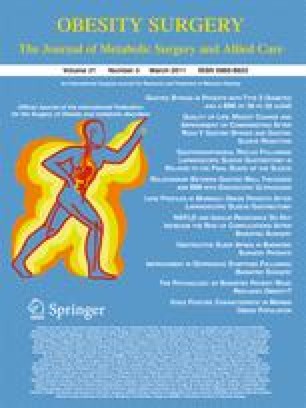 Relationship Between Obesity and Diabetes in a US Adult Population: Findings from the National Health and Nutrition Examination Survey, 1999–2006

Obesity is one of the most important modifiable risk factors for the prevention of type 2 diabetes. The aim of this study was to examine the prevalence of diabetes with increasing severity of obesity and the distribution of HbA1c levels in diabetics participating in the latest National Health and Nutrition Examination Survey (NHANES).

Data from a representative sample of adults with diabetes participating in the NHANES between 1999 and 2006 were reviewed. The prevalence of diabetes and levels of fasting glucose, insulin, c-peptide, and HbA1c were examined across different weight classes with normal weight, overweight, and obesity classes 1, 2, and 3 were defined as body mass index (BMI) of <25.0, 25.0–29.9, 30.0–34.9, 35.0–39.9, and equal to 40.0, respectively. The distribution of HbA1c levels among adults with diabetes was also examined.

In a nationally representative sample of US adults, the prevalence of diabetes increases with increasing weight classes. Nearly one fourth of adults with diabetes have poor glycemic control and nearly half of adult diabetics are considered obese suggesting that weight loss is an important intervention in an effort to reduce the impact of diabetes on the health care system.

Presented as a poster presentation at the American Society for Metabolic and Bariatric Surgery on June 24, 2009, Grapevine, Texas.

The crude prevalence of total diabetes in adult’s age equal to 20 years is 9.6% or 20.4 million in the US and many diabetic individuals are obese [1]. Obesity is one of the most important modifiable risk factors for the prevention of type 2 diabetes; however, obesity is an epidemic in the US. Recent data from the National Health and Nutrition Examination Survey (NHANES) in 2003–2004 indicate that among adults aged 20 to 39 years, 28.5% are obese while 36.8% of adults aged 40 to 59 years and 31.0% of those aged 60 years or older are obese, defined as a body mass index (BMI) of 30.0 or higher [2]. Similarly, during a 20-year period (1976–2006), the mean BMI among adults with type 2 diabetes increased from 29.2 to 34.2 kg/m [2] [3]. Excess weight has been shown to be associated with an increased prevalence of type II diabetes, gastroesophageal reflux, hypertension, dyslipidemia, and certain cancers and both obesity and diabetes are associated with an increased risk for mortality, particularly from cardiovascular disease [4, 5, 6]. The aim of this study was to (1) determine the prevalence of obesity and the state of glycemic control among diabetics and (2) examine the association between obesity and diabetes in a large cohort of US individuals participating in the 1999 to 2006 NHANES.

The NHANES survey is conducted by the National Center for Health Statistics, which is part of the Centers for Disease Control and Prevention. The NHANES provides cross-sectional data on the health and nutrition of the US population. The survey examines a nationally representative complex, multistage probability sample of about 5,000 US civilians each year, located within 15 counties across the country. The NHANES survey consists of an extensive health information interview, a complete physical examination, and extensive laboratory testing. The physical examinations are performed in a mobile examination center. Data from the four latest NHANES surveys were merged for analysis (1999–2000, 2001–2002, 2003–2004, and 2005–2006).

Data files extracted for this study included demographic information, systolic blood pressure measurements, medical disease history, smoking history, and laboratory measures (lipid profile and fasting glucose, insulin, c-peptide, and hemoglobin A1C levels). Height and weight were measured using standardized protocols. Participants were considered to have diabetes mellitus if they were told by their doctor they have diabetes, had a fasting plasma glucose concentration of 125 mg/dL, had a hemoglobin A1C level of 6.0%, or use anti-diabetic medication(s) such as insulin or oral hypoglycemic agents.

All statistical analyses were conducted in SAS 9.1 (SAS Institute Inc., Cary, NC). Due to the NHANES’ complex probability sampling of the US population, sample weights, stratification, and clustering of the sampling design were incorporated into all SAS survey procedures to ensure the correct estimation of standard errors, confidence intervals, and P values. An 8-year sample weight was created according to the NHANES analytic guidelines for the combined 1999–2006 data by assigning one half of the 4-year weight for 1999–2002 if a participant was sampled in 1999–2002 and assigning one fourth of the 2-year weight for those sampled in 2003–2006. The stratification and clustering variables were used in all analyses. Statistical significance was set at P values <0.05.

Characteristics among adults with diabetes according to weight classes, NHANES 1999–2006

Changes in hemoglobin A1C, glucose, insulin, and c-peptide levels among adults with diabetes according to weight classes, NHANES 1999–2006

Categories of hemoglobin A1C levels among adults with diabetes, NHANES 1999–2006

The finding of a high prevalence of obesity in adults with diabetes from this study suggests that more effort should be taken to combat obesity since obesity is a modifiable risk factor for the development of diabetes. These efforts should include prevention of obesity in combination with medical and surgical treatments of obesity. The look AHEAD trial is one of the largest trials of intentional weight loss in diabetics. This is a multicentered, randomized, controlled trial of 5,145 individuals with type 2 diabetes with BMI >25 who were randomized to undergo intensive lifestyle intervention compared with diabetes support and education (control group). Participants randomized to lifestyle intervention lost an average of 8.6% of their initial weight compared to 0.7% in the control group [11]. A greater proportion of the individuals in the lifestyle intervention group had reduction in diabetes, hypertension, and lipid-lowering medications. The mean hemoglobin A1C level improved significantly more in the lifestyle intervention than control participants [11]. Bariatric surgery has also been shown to improve and even induce remission of diabetes in the morbidly obese. In a large study on 240 patients with diabetes or have impaired fasting glucose levels, Schauer et al. [12] reported that resolution of diabetes was achieved in 83% of patients and patients with a short duration of the disease (<5 years), mildest form of diabetes, and the greatest weight loss were more likely to achieve complete remission of diabetes. In a meta-analysis of 19 studies and 11,175 patients on the effect of bariatric surgery on diabetes, Buchwald et al. reported that 78.1% of diabetic patients had complete resolution and diabetes was improved or resolved in 86.6% of patients; diabetes resolution was greatest for patients undergoing biliopancreatic diversion/duodenal switch, followed by gastric bypass, and least for banding procedures [13]. In addition to the findings of improvement of diabetes with bariatric surgery, several recent studies have shown improved survival rates for morbidly obese individuals who underwent bariatric surgery compared to the control individuals without surgical intervention [14, 15]. Adams and colleagues reported a retrospective cohort study comparing 7,925 morbidly obese patients who underwent bariatric surgery to 7,925 severely obese control subjects and found that the cause-specific mortality related to diabetes decreased by 88% in the surgical group during a mean follow-up of 7.1 years [14]. In a landmark paper published in 2004 comparing 2,010 severely obese subjects who underwent bariatric surgery compared to 2,037 control subjects, Sjostrom and colleagues reported that the incidence of diabetes was significantly lower within the surgery group compares to control group at 2 and 10 years follow-up [16]. Of the 1,056 patients with a 10-year follow-up, the incidence of diabetes in the control group was 24% while the incidence of diabetes in the surgical group was 7% [16]. Lastly, prevention of obesity is a key public health initiative in an attempt to reduce the incidence of obesity and diabetes risk. Currently, Head Start is the largest federally funded early childhood obesity education program in the United States. In a survey of 1,583 Head Start programs, Whitaker and colleagues reported that most Head Start programs are doing more to support healthy eating and gross motor activity than required by federal requirement standards [17].

Our study shows a clear association between obesity and diabetes, using a large nationwide database. However, there are notable limitations in the use and interpretation of this observational data. The NHANES survey is a series of cross-sectional analyses of the US population. Therefore, longitudinal data across study years is not provided, and no temporal analyses can be conducted. As with all survey data, there are inherent limitations in the collection methods, which can lead to sampling error, measurement error, and reporting bias.

In summary, our findings demonstrate an association between increasing obesity classes and increasing prevalence of diabetes. Nearly one fourth of adults with diabetes have poor glycemic control and nearly half of adult diabetics are considered obese based on an 8-year period (1999–2006) data from a cross-sectional representative of the US adult population. An important implication from this study is that medical or surgical weight loss and obesity prevention are important interventions in an effort to reduce the impact of diabetes on the health care system.

The authors declared that there are no conflicts of interest.