Metallurgical and Materials Transactions B 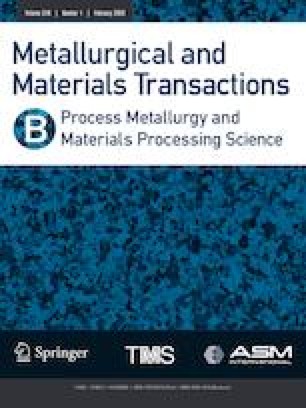 Metallurgical and Materials Transactions B

A recent publication by Lai et al.[1] presents an assessment of the reaction mechanism in the electro-deoxidation of TiO2 to Ti by means of the FFC-Cambridge process. Therein, Lai et al. put forward an alternative interpretation of the reactions occurring in the early stage of the electro-deoxidation of TiO2 that is in stark contrast to the explanations presented in the pre-existing literature. Their interpretation hinges on the claim that Ti suboxides, such as Ti2O3, are unable to react to CaTiO3 when polarized cathodically in a CaCl2 melt. Herein, this claim is refuted. Several other statements made in the study by Lai et al. as well as in a follow-up study by Hu et al. from the same group[2] are also subjected to a critical analysis and disproven. Overall, the entire new interpretation is shown to be fundamentally flawed.

The FFC-Cambridge process is a comparatively new metallurgical method for the winning of metals and alloys from their pure and mixed oxides.[ 3] In...

Ti2O3 was prepared by the reaction of TiO2 and Ti. Equal molar quantities of TiO2 (Aldrich 24,857-6; – 325 mesh, 99+ pct) and Ti (Aldrich 26,849-6; – 100 mesh, 99.7 pct) were thoroughly mixed, and the resulting powder was uniaxially pressed into discs. The discs were sintered at 1573 K in oxygen-scrubbed Ar for 2.5 hours. The sintered discs were relatively friable, but with sufficient strength for further handling, and had a mat dark purple appearance. Archimedes measurements in water yielded an open porosity of 42 pct, XRD analysis confirmed Ti2O3 as the dominant phase, and scanning electron microscopy analysis revealed a relatively uniform particle size distribution around a mean of 5 μm. The discs were ground down carefully to the desired mass.

The electrochemical experiments were conducted using similar equipment and process parameters as in Reference 10. First, pre-electrolysis of the CaCl2 melt was performed. Then, electro-deoxidation of the Ti2O3 was carried out in the pre-electrolyzed melt. A disc of mass 7.2 g and of similar dimensions as the TiO2 discs in Reference 10 was cathodically polarized at 2.5 V against a graphite anode in Ar atmosphere. Samples were retrieved from the melt after different periods of time. They were cleaned as before, using, in this order, tap water, 1 M HCl solution, distilled water, and acetone, and finally dried in vacuum. XRD analysis was used to identify the phase composition of the partially reduced Ti2O3 samples. Figure A1 shows the XRD pattern of a sample retrieved after 3 hours of cathodic polarization. It contained the peaks of TiO and CaTiO3 and had no other major peaks. This observation clearly indicates that the expected Reaction [7] had taken place. The result corroborates the reaction sequence originally put forward by Schwandt and Fray and refutes any alternative ideas.

CaTi2O4 was prepared by the reaction of TiO and CaTiO3. Equal molar quantities of TiO (Aldrich 48,104-1; – 325 mesh, 99.9 pct) and CaTiO3 (Aldrich 37,260-9; – 325 mesh, 99+ pct) were thoroughly mixed, and the resulting powder was uniaxially pressed into discs. The discs were placed on a sheet of Pt metal, and this was positioned at the bottom of an alumina crucible and covered with around 200 g of dried CaCl2 salt. The setup was heated at 1173 K in Ar for 3 hours. After cooling, the resolidified salt was carefully rinsed away with tap water. The product at the bottom of the crucible had retained its disc shape, but was rather friable and sometimes fragmented, and had a shiny black appearance. It was washed with distilled water and acetone, and finally dried in vacuum. XRD analysis confirmed CaTi2O4 as the only major phase. Figure B1 shows the XRD pattern of the product.

The result confirms that CaTi2O4 can be formed from TiO and CaTiO3 at elevated temperatures and must, therefore, have a negative Gibbs free energy of formation. Furthermore, it may be stated that molten CaCl2 is an efficient reaction catalyst, probably allowing the transport of some Ca-based species between the particles, because the reaction remained incomplete when carried out in the absence of the molten salt. The result implies that the appearance or nonappearance of CaTi2O4 in the reduction pathway of TiO2 is dependent on the kinetics of the system under the specific experimental conditions applied.