Metallurgical and Materials Transactions A 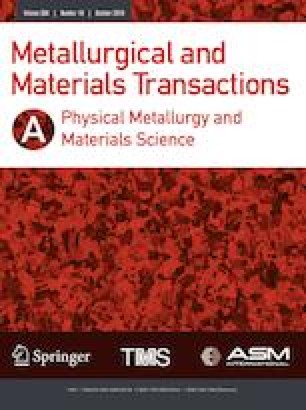 Metallurgical and Materials Transactions A

C106 copper (Cu-DHP: phosphorus deoxidized copper) is extensively used in industrial applications such as heat exchangers, water piping, and pressure vessels[1] due to its good formability, corrosion resistance, and weldabiltiy. Studies have shown that the residual phosphorous in the copper improves its weldability as well as its creep resistance compared to Cu-OF (oxygen free) copper particularly at elevated temperatures over 150 °C.[2,3]

C106 strain hardens and thus achieves increases in strength following forming due to the formation of point defects and dislocation tangles.[6] Within this study, forming limit curve (FLC) testing was conducted using a Nakajima hemispherical tool in direct contact with test pieces to establish material formability.[7] Nakajima testing is well established for the determination of forming limit curves for various materials including copper and steel[8, 9]; samples from this testing were then used to establish hardness values to look at the strain hardening achieved and subsequent strength reductions following exposure to elevated temperatures.

To glean better understanding of recrystallization characteristics of metallic materials in situ techniques have been widely employed. These allow for direct observation of events rather than post facto sample preparation where previous events must be inferred.[10, 11, 12, 13] In situ observations are extremely useful as recrystallization is a highly complex process effected heavily by stored energy which is itself impacted by many variables [strain extent, grain size, grain boundary characters, chemical elements, crystal orientation, and stacking fault energy (SFE)].[14, 15, 16] Understanding better the recrystallization region of the material and related microstructural evolution will help to better inform industrial processes and avoid any potential problems.

Pre-rolled commercially available C106-DHP (99.85 pct Cu, 0.15 pct P) was used throughout this study. The material was nominally supplied in the annealed condition as 0.5 mm sheet; no further thermomechanical processing was applied prior to testing.

To offer analogs of industrial processes materials were subjected to testing using a Nakajima punch operating with a constant punch velocity (1 mm/s) to establish a forming limit curve for the material.[17] Samples were then taken from heavily strained regions of the said FLC samples (region 7 Figure 1(b)) and subjected to Vickers hardness testing and EBSD analysis, at both pre- and post-heat treatments. Heating was conducted in a Nabotherm furnace. Samples were exposed to a cycle comprising a 20-minute ramp to 500 °C, holding at this temperature for 30 minutes and subsequently being air quenched.

A second method to mimic industrial conditions was conducted using a Gleeble test rig. Samples were CNC machined from sheet material and instrumented with thermocouples to monitor and maintain an accurate temperature throughout testing. Samples were placed into a Gleeble 3800 test rig and heated to 500 °C over a 20 minute period and then held at temperature for 30 minutes before being removed and allowed to air quench. Throughout testing a constant 50 MPa pressure was applied to samples.

EBSD analysis was conducted using a JEOL JSM-7800F FEG-SEM scanning electron microscope with Symmetry electron back scattered detectors and Oxford Aztec software. Settings were optimized for each test operating at an accelerating voltage of 20 keV. Samples were prepared using standard metallographic techniques, hydrogen peroxide was added to the final stage to give a light surface etch and highlight grain boundaries. Hardness testing was conducted using a Wilson VH3300 hardness tester operating in 0.5 Hv mode with a dwell time of 10 s per indent.

In situ characterization was carried out using a Gatan Murano hot stage pretilted to 70 deg mounted inside a Carl Zeiss Gemini FEGSEM using Nordlys detectors and Oxford Aztec software using existing methodologies.[18] Samples were mounted to carrier plates by graphite cement, this carrier plate was then in direct contact with a thermocouple and heated via induction. Settings were optimized for each test operating at 20 keV with a 240 µm aperture, a 0.5 µm step size was employed throughout which gave an average scan time of 70 seconds. Scans were conducted when the temperature had stabilized and no issues with thermal drift were observed.

The forming limit curve of C106 copper is illustrated in Figure 1(a). The material achieved levels of formability as would be expected.[6] Hardness values from various areas of a sectioned formed FLC sample pre and post heat treatment are shown in Figure 1(b), and hardness was observed to increase in regions of increased strain. Following heating, the values were significantly reduced with an average reduction of 24 pct across all regions. EBSD analysis was then used to observe the microstructure post forming and post heat treatment near to the failure point of an FLC sample

Figure 2(a) shows the region at the failure point of a uniaxial tension FLC sample. A heavily deformed structure with grains elongated in the direction of deformation was observed. Zero indexing in this region was attributed to this high level of deformation. A maximum MUD (multiples of uniform distribution) value of 7.9 was observed; showing a strong texture in the direction of deformation. Following heat treatment a sample from the same region; shown in Figure 2(b), was observed to be fully recrystallized with an equiaxed grain structure showing no evidence of deformation. A peak MUD value of 2.4 in this sample indicates a randomized texture as would be seen in an annealed sample. Grain structure, size, and texture were all similar to as received condition showing the material had been fully annealed and recrystallized following this heat treatment. This correlates with the reduction in strength within this region following heat treatment observed within hardness testing.
Figures 3(a) and (b) show EBSD scans prior to and following Gleeble testing at 500 °C for 30 minutes under 50 MPa of constant force. This thermomechanical cycle was chosen to mimic in service conditions industrially and observe the influence on grain structure thereof. We observed significant grain growth of around 300 pct with average grain diameter increasing from 9 to 30 µm, with no evidence of the parent grains and initial microstructure remaining. The test temperature was greater than the material recrystallization temperature, so evolution of the microstructure was expected. This shows the final stage of microstructural evolution; that of grain growth following recrystallization.

Whilst industrial operating temperatures are significantly above the recrystallization temperature (around 500 °C) the temperature at which recrystallization initiates within strained material was of interest; in situ heated stage EBSD analysis was employed to observe this phenomena. Previous studies have shown that whilst the temperature of recrystallization observed within in situ testing cannot be taken as an exact value (there will be some range) the results are comparable to those of post facto bulk analysis results.[18] Strained samples were taken from near to the failure region of FLC samples having an equivalent strain in the region of 50 pct. Equivalent strain is based on localized thinning of a material, where To is original thickness and Ts is strained thickness given in Eq. [1].

$$ \left( {\left( {\frac{{T_{\text{o}} }}{{T_{\text{s}} }}} \right) - 1} \right) \times 100. $$
(1)
A standard in situ cycle requires degassing at 200 °C for 5 minutes. Following this degassing strained samples were observed to be fully recrystallized. To overcome this degassing was conducted at 90 °C at which point EBSD scans showed no change to the microstructure. Samples were then subjected to 20 °C increments in temperature with a ramp rate of 100 °C/s and a dwell of 30 s before being returned to room temperature for EBSD. Recrystallization was observed to initiate at temperatures as low as 130 °C, as shown in Figure 4(a) which show the initial microstructure and the microstructure following heating to 130 °C, recrystallization was complete by 225 °C. The IPF (inverse pole figure) map shows new grains within the original matrix. This was confirmed by reductions in local misorientations in the regions of these new grains.

Microhardness was employed to verify the point of recrystallization; samples were exposed to heat treatments as for in situ testing using a Nabotherm furnace; the results of which are shown in Figure 4(b). Hardness values for the material remained unchanged at 90 °C and 110 °C with a slight decrease at 130 °C corresponding to the point at which recrystallization was observed. A sharp drop in hardness was observed following heating about 170 °C showing increased recrystallization kinetics above this temperature. At 225 °C the hardness value was 75 Hv; the same as for the initial material which was nominally annealed. This indicates that the sample was fully recrystallized at this temperature but had not yet initiated grain growth and further softening.

Recrystallization at 130 °C is significantly lower than would be expected of an unstrained sample, and is lower than reported for this material elsewhere; other than reports on material which had undergone ECAP (equal channel angular pressing) that produces an ultrafine grained material due to the extreme levels of strain imparted during processing.[19] Recrystallization initiating at such low temperatures would explain the significant levels of grain growth observed within samples exposed to 500 °C heat treatments. By this temperature all recrystallization will be completed and the microstructure will be undergoing significant grain growth and further softening.

In this study, we investigated the influence of elevated temperatures on the physical properties of C106 copper by a series of industrial analogs; the microstructural evolution was investigated ex post facto as well as via in situ heated stage to better identify the initiation of recrystallization. The material was observed to strain harden during an FLC test achieving a peak hardness of 108 Hv, a heat treatment at 500 °C following this lead to significant reductions in hardness of the material with a 24 pct drop in peak hardness. Gleeble testing with parameters of 500 °C with a constant 50 MPa for a 30-minute period to mimic and industrial process yielded a fully recrystallized microstructure with evidence of significant grain growth.

At operating temperatures in the region of 500 °C C106 copper will have an unstable changing microstructure, leading to significant grain growth and softening which could have negative effects during service. This study then shows that within strained C106 copper recrystallization will start at temperatures as low as 130 °C with full recrystallization taking place around 225 °C. Softening of the material due to this recrystallization reduced the peak hardness from 108 Hv following straining within an FLC test, to 75 Hv which is the same as for an annealed sample prior to the application of strain.

The key funding of this project is from the Atomic Weapons Establishment (AWE). In addition to this, the characterization facility supports received from the Higher Education Funding Council for England (HEFCE) fund and the WMG Centre High Value Manufacturing Catapult, are gratefully acknowledged. Z Li would like to thank the financial support from the EPSRC (EP/N011368/1).