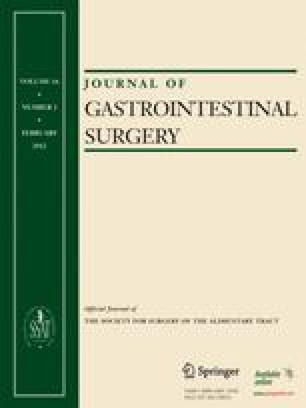 The aim of this study is to demonstrate that as the cohort of DMD and SPD patients expand, the original conclusions are durable.

The database of patients receiving treatment for WOPN between January 2006 and April 2011 was analyzed retrospectively.

One hundred two patients with symptomatic WOPN who had no previous drainage procedures were evaluated: 49 with DMD and 46 with SPD; 7 were excluded due to a salvage procedure.

Patient characteristics including age, sex, etiology of pancreatitis, and severity of disease based on computed tomographic severity index were indistinguishable between the two cohorts. The DMD cohort had shorter LOH, time until removal of percutaneous drains, fewer CT scans, drain studies, and endoscopic retrograde cholangiopancreatography (ERCPs; p < 0.05 for all). There were 12 identifiable complications during DMD, which were successfully treated without the need for surgery. The 30-day mortality in DMD was 4% (one multi-system organ failure and one out of the hospital with congestive heart failure). Three patients receiving SPD had surgery, and three (7%) died in the hospital.

This paper was presented at the Plenary Session of the SSAT, May 10, 2011. There are no author conflicts of interest to disclose. No non-VMMC funding sources were utilized. All authors were involved in study concept and design; acquisition of data; analysis and interpretation of data; drafting of the manuscript; critical revision of the manuscript for important intellectual content; statistical analysis; administrative, technical, or material support.

All authors were involved in the design and analysis of study results and assisted in writing this paper.

Dr. Todd Baron (Rochester, MN): Use of irrigation in the management of pancreatic necrosis was initially described when specific open necrosectomy approaches were used. Irrigation became vital in the percutaneous approach as established by the Virginia Mason group. The initial series of successful endoscopic drainage of pancreatic necrosis employed aggressive irrigation through a single transmural tract using a nasobiliary tube inserted alongside internally placed stents. Subsequently, some authors reported using irrigation provided through placement of a jejunal extension tube through a PEG tube that was then passed through the transmural site into the collection; this also avoids external fistula.

The present study by Dr. Gluck and colleagues uses less intensive endoscopic and percutaneous approaches than when either is used alone. I believe this dual modality drainage (DMD) therapy could potentially be reproducible and particularly useful in community centers where endoscopic techniques for transmural placement of stents as for pseudocyst drainage and percutaneous techniques as for abscess drainage are now commonly available.

1.What was the volume and type of irrigant used in the DMD group?

2.Your patients had primarily central pancreatic necrosis. Can you comment on how many patients had large paracolic gutter extensions (unilateral and bilateral)? These are patients traditionally difficult to treat using endoscopic transmural techniques alone.

3.What was the outcome of those in disconnected ducts in whom transmural stents remained long term? How long did those stents remain in place?

4.Can you comment as to why you think the pseudoaneurysm rate was much lower in the DMD group?

1. What was the volume and type of irrigant used in the DMD group?

We used 20 mL of sterile normal saline, infused three times daily through each percutaneous drain. This was the same quantity and type of fluid as used in the SPD group. As the cavities closed, we decreased the volume until the drains were removed.

2. Your patients had primarily central pancreatic necrosis. Can you comment on how many patients had large paracolic gutter extensions (unilateral and bilateral)? These are patients traditionally difficult to treat using endoscopic transmural techniques alone.

Radiographs of all patients who had SPD and DMD were reviewed to determine if paracolic gutter extension existed on the day of percutaneous drainage. Sixty percent of SPD and 39% of DMD had evidence of left-sided, right-sided, or bilateral extension (p < 0.03). In the SPD group, 16 (35%) had bilateral extension compared to 10 (21%) in the DMD. Only two patients in the SPD cohort had solely right-sided involvement without left-sided as compared to none in the DMD cohort. As Dr. Baron mentioned, those patients with paracolic extension appear to have longer hospitalizations and duration of percutaneous drain tubes in both SPD and DMD. Comparing those with bilateral extension in both cohorts still demonstrates reduced hospital stays and number of radiological studies needed until discharge in the DMD cohort.

3. What was the outcome of those in disconnected ducts in whom transmural stents remained long term? How long did those stents remain in place?

4. Can you comment as to why you think the pseudoaneurysm rate was much lower in the DMD group?

Although speculative, we think that pseudoaneurysms develop due to direct contact of arteries to the erosive effects of pancreatic secretions, inflammatory debris, and the mechanical trauma of percutaneous tube exchanges. The DMD cohort had fewer drains, fewer drain exchanges, smaller maximal drain size (18 French versus 28 French), and significantly shorter time to resolution of WOPN, decreasing exposure of the retroperitoneal vasculature to pancreatic secretions. The secretions preferentially drained into the stomach or duodenum and away from the WOPN.

Dr. Baron suggested that DMD could conceivably be instituted at community hospitals given that skilled endoscopic ultrasonographers place transgastric stents into pseudocysts and interventional radiologists commonly drain abscesses. In theory and with respect to skill level, we agree with him; however, we have cared for two patients who had DMD undertaken at community hospitals who then developed abscesses requiring further intensive management at our tertiary pancreatic center. Management of WOPN requires a team approach where there are an adequate number of committed interventional radiologists who cover one another, gastroenterologists who manage pancreatic diseases regularly, and surgeons who can and will operate on the pancreas if necessary. Until those teams are assembled, we recommend that management of WOPN be initiated and completed in centers with a substantial volume of patients with severe acute pancreatitis, expertise in minimally invasive techniques to treat WOPN, and a coordinated multidisciplinary approach for those patients.

© The Society for Surgery of the Alimentary Tract 2011