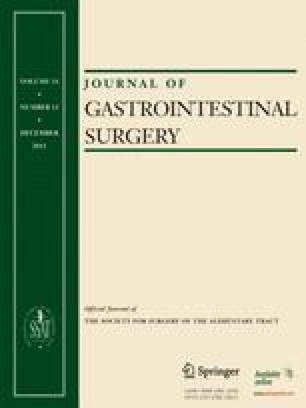 While laparoscopic Roux-en-Y gastric bypass is one of the most commonly performed procedures for morbid obesity in the USA, robotic application has been viewed as a valid option. However, the technique is not firmly established with single robotic docking. The objective of this video is to demonstrate the technical details of performing a standardized monoquadrant robotic Roux-en-Y gastric bypass (RRYGB).

Between April 2008 and May 2009, 15 patients meeting the NIH consensus criteria for bariatric surgery underwent a monoquadrant RRYGB. The data were prospectively collected in a dedicated bariatric database and reviewed retrospectively. The patient was positioned supine. Subsequent to creating a 30-ml gastric pouch using a series of endostaplers, the da Vinci robotic system (Intuitive, Sunnyvale, CA) was docked cranially. The robotic arms were attached in the double cannulation fashion. The gastrojejunostomy (GJ) was performed by a robot-assisted hand-sewn double-layered technique, followed by the creation of a jejunojejunostomy (JJ) with an endostapler. The common enterotomy of the JJ was closed with robot-assisted hand-sewn double-layered fashion. The bridge of jejunum between the GJ and JJ was transected separating both anastomoses. The mesenteric defect was not routinely closed at the end of the procedure.

There were 13 women and 2 men with a median age of 36 years included in this study. The procedure was successfully accomplished by a monoquadrant robotic technique in 14 cases (93.3%). One case was converted to open procedure because of an intra-operative enterotomy by an endostapler. The mean operative time was 202 min (range 158–353 min). There was no postoperative complication, notably no GI leak or anastomotic bleeding. The median hospital stay was 2.4 days (range 1.7–4 days). The mean weight loss after 1 year was 38.5 kg.

This video highlights the feasibility of performing a standardized monoquadrant RRYGB in its entirety with single docking of the da Vinci robotic system.

Drs. Ayloo, Buchs, Addeo, Bianco, and Giulianotti have no conflict of interest or financial ties to disclose.

© The Society for Surgery of the Alimentary Tract 2011