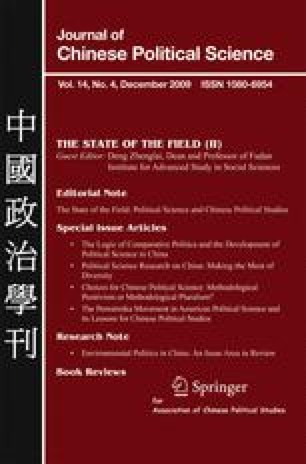 The State of the Field: Political Science and Chinese Political Studies

The Roundtable attracted high level participants and endeavoured to be international, pioneering, and high quality, the latter three objectives in accordance with Journal of Chinese Political Science’s academic motto. The high quality of Roundtable papers can be seen in the four articles that were selected from among all the participants’ papers for inclusion into this Special Issue. Of the four articles, the first three papers by Jon R. Taylor, Björn Alpermann and Yang Zhong constitute a response to Professor Deng Zhenglai’s championing of an autonomous Chinese social science as well as his Roundtable proposal for “the indigenization of Chinese political studies.” The core question these three articles address is whether or not there a need to indigenize Chinese political science. Looking forward, the question is whether the development of Chinese political studies should be centered on further scientification and the identification of universal theories or rather on an indigenization which focuses on national conditions (guoqing) and culture? Generally speaking, Jon R. Taylor offered a positive opinion about the indigenization of Chinese political studies, while Björn Alpermann and Yang Zhong questioned its merits from the perspectives of research methodology and comparative politics. Shelley Rigger discussed the recent “Perestroika movement” in American political studies and its implications for China.

Although indigenization was not used in Jon R. Taylor’s discussion, he proposed a “political science with Chinese characteristics.” Such a political science would distinguish itself from American and Western political sciences by its methodological pragmatism. In particular, the problem-driven research, based upon a general understanding of China’s need for zhixu de jinxin gaige (“gradual change”), zhengzhi wending (“political stability”), and dangnei minzhu (“intra-party democracy”) could better serve China’s current political, economic, and societal needs than a more positivist political science. For him, “political science with Chinese characteristics” at least emphasizes the following factors: the uniqueness of China, the distinctive nature of the Chinese political system, the distinctive nature of Chinese history, culture, and development, the urban-rural and coastal/interior political and developmental dichotomy, the historic role of the CCP, and social and demographic concerns unique to China.

In the beginning of his essay, despite his introduction of “autonomy and indigenization” (bentuhua) as proposed by Zhenglai Deng, Björn Alpermann actually questioned Deng’s thesis. For him, dichotomizing Chinese and Western social sciences might be not only misleading, but also hazardous to intercultural exchange for Chinese social science. In fact, it is problematic to stress the dichotomy between Chinese and Western political studies. On the one hand, such a characterization does not recognise the significant level of diversity within social sciences in the West. In terms of research methodology, the diversity of political studies in the West is not so much a matter of the geographical division between the US and Europe, as of the dichotomy between quantitative and qualitative studies. Similarly, the main fault-lines of the debate may not run between “Western” and “Chinese” approaches but rather between the two broad “cultures” of qualitative and quantitative research. On the other hand, contemporary social science generally expects to develop mostly “mid-range” theories with definite limits to their applicability–instead of positing universally applicable social laws. Therefore, whenever concepts or theories developed in a Western context do not appear applicable to Chinese realities, this can easily be conceived as a problem of determining their appropriate “scope conditions” without leaving the general paradigm.

Similar to Björn Alpermann, Yang Zhong was more explicit and focused on questioning Deng’s thesis. As he pointed out, the indigenization of Chinese political studies is inappropriate and even misleading. From the perspective of comparative politics, political phenomena and their causality in different countries and regions should be systematically examined by scientific methodology and on the basis of social science. The conclusion thus drawn thereof shall infer a theory. To put it simply, the logic of comparative politics is to use theoretical concepts as variables to replace proper names, as proposed by Adam Przeworski and Henry Teune, while time and location are both seen as potential variables. Social science researchers should not be confined to such terms as “national conditions” (guoqing) and “culture” in examining social and behavioural phenomena, but rather explicate and theorize the implications behind these terms. In spite of the variations between phenomena under examination, the theories thus derived should be universal in their applicability. A major undertaking for comparative politics is to compare the politics of one nation to that of the other, from which to draw a universal conclusion. Therefore, according to the logic of comparative politics, the true development of Chinese political studies would not be “indigenization,” but a removal of the word “China,” replacing it instead with more general theoretical concept linking Chinese political studies to the wider field of social science. Zhong Yang emphasizes that the development of political science in China should be devoid of nationalist sentiments or the problem of “UN representatives.”

Rather than addressing the indigenization debate directly, Shelley Rigger’s piece takes, as its starting point, the post-2000 “Perestroika movement” in the American political science circle and derives implications for China from it. Shelley Rigger mainly discussed the following doctrines of the Perestroika movement: (1) “fragmentation and incoherence” in the American political science – American political science is little more than a collection of methods, approaches, theories and concepts deployed in the study of particular substantive areas, such as American politics, comparative politics, international relations, and political theory; (2) methodological pluralism – different methods should be are to be judged by individualized standards, rather than being rejected automatically because they do not conform to a “hard science” approach; (3) “problem-driven research”– research should be motivated by issues in the real world that demand understanding and resolution; (4) the internationalization of political science never meant the proliferation of “scientific” approaches that would crowd out approaches that are sensitive to the particularities of individual countries and cases; and (5) the Perestroika debate has been almost entirely focused on the research side of our profession, whereas its proponents have given little attention to political education which needs more consideration.