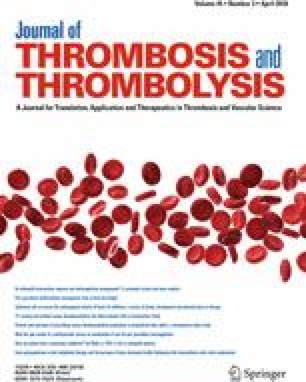 The Journal of Thrombosis and Thrombolysis is proud to present the first article in a new section entitled “National and International Meeting Highlights”. Each article in this series will review some of the major studies or guideline updates presented at international conferences. The conferences covered in this series will include the American Heart Association Annual Scientific Sessions, American Society of Hematology Annual Meeting, American College of Cardiology Annual Scientific Session, International Society of Thrombosis and Haemostasis Biennial Congress, and European Society of Cardiology Annual Congress. Although all the exciting presentations at each conference cannot be covered in these articles, we hope this series provides readers with a taste of the ones that may shape guidelines and practice.

Adjusted hazard ratios for prespecified endpoints according to on-treatment hsCRP

Data are reported as adjusted hazard ratios with 95% confidence intervals

The use of contrast material in cardiovascular angiography carries with it the well-known risk of acute kidney injury and long term renal complications. Investigators have long hypothesized that the risk of renal complications might be reduced by sodium bicarbonate infusion or oral acetylcysteine, yet previous studies have yielded inconclusive results. The Prevention of Serious Adverse Events Following Angiography (PRESERVE) trial, a 2 × 2 factorial design trial, randomized subjects to sodium bicarbonate infusion versus sodium chloride infusion and acetylcysteine versus placebo [3]. The primary endpoint was death, need for dialysis, or a persistent increase of at least 50% from baseline in serum creatinine at 90–104 days after angiography. The study which intended to enroll 7680 patients was stopped after 5177 patients were randomized (4993 included in the primary analysis group) after a preplanned interim analysis demonstrated no between-group differences. The results of the study provided convincing evidence that there is neither incremental benefit of sodium bicarbonate versus sodium chloride infusion nor of acetylcysteine administration.

Strategies of liberal versus restrictive thresholds for packed red blood cell (PRBC) transfusion have undergone evaluation across a variety of conditions. The unknown balance of risks of anemia-induced tissue hypoxia versus risks due to transfusions, led the investigators of the Transfusion Requirements in Cardiac Surgery (TRISC) III trial to evaluate these strategies in adult patients undergoing cardiac surgery with cardiopulmonary bypass [4]. Using a noninferiority design, patients with a EuroSCORE I of 6 or higher (higher scores indicating higher risk of death after cardiac surgery) were randomized 1:1 to a transfusion threshold of: (1) 7.5 g/dL intraoperatively and postoperatively, versus (2) 9.5 g/dL intraoperatively and in the ICU and then 8.5 g/dL in the non-ICU ward. The primary endpoint was a composite of death, nonfatal myocardial infarction, stroke, or new-onset renal failure.

At baseline, mean hemoglobin concentration was 13.1 g/dL. During the post-operative period, the hemoglobin concentration between the groups differed by approximately 1 g/dL. In the restrictive-threshold group 52.3% received a transfusion versus 72.6% the liberal-threshold group. The primary endpoint occurred in 11.4 versus 12.5% in the restrictive versus liberal-threshold groups (Table 2). These data demonstrate that a more restrictive approach to transfusion is noninferior to a more liberal approach for patients undergoing cardiac surgery with cardiopulmonary bypass.

Outcomes in the per-protocol population

At the AHA, Dr. Oldgren presented subgroup analyses for key baseline clinical subgroups, including stenting for ACS versus non-ACS indication, drug-eluting versus bare-metal stent use, and P2Y12 choice of clopidogrel versus ticagrelor. The investigators found no signification interactions by subgroups and concluded that the main study results were consistent amongst them. These findings support use of non-warfarin based strategies in these patients as well as the safety of ticagrelor if desired in those at higher thrombotic risk.

Finally, the new ACC/AHA hypertension guidelines were released [6]. Although this article doesn’t permit coverage of this long and comprehensive document, some key points are worth mentioning: