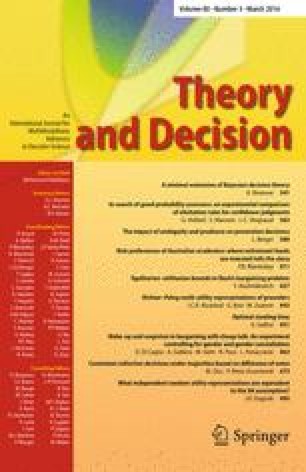 In search of good probability assessors: an experimental comparison of elicitation rules for confidence judgments

In this paper, we use an experimental design to compare the performance of elicitation rules for subjective beliefs. Contrary to previous works in which elicited beliefs are compared to an objective benchmark, we consider a purely subjective belief framework (confidence in one’s own performance in a cognitive task and a perceptual task). The performance of different elicitation rules is assessed according to the accuracy of stated beliefs in predicting success. We measure this accuracy using two main factors: calibration and discrimination. For each of them, we propose two statistical indexes and we compare the rules’ performances for each measurement. The matching probability method provides more accurate beliefs in terms of discrimination, while the quadratic scoring rule reduces overconfidence and the free rule, a simple rule with no incentives, which succeeds in eliciting accurate beliefs. Nevertheless, the matching probability appears to be the best mechanism for eliciting beliefs due to its performances in terms of calibration and discrimination, but also its ability to elicit consistent beliefs across measures and across tasks, as well as its empirical and theoretical properties.

The authors indicated in parentheses made substantial contributions to the following tasks of research: initial conception and design (G.H., S.M., J.C.V.), collection of data, analysis and writing of paper (S.M., J.C.V.).

The authors are grateful for insightful comments by Karim N’Diaye, Steve Fleming, Thibault Gajdos and Peter Wakker; participants at the ESE Conference in Rotterdam, the EBIM Workshop in Paris, the LabSi Workshop in Sienna, the FUR XIV in Newcastle, the ESA 2010 in Copenhagen, the SABE 2010 in San Diego, the EMPG 2011 in Paris, and the North American ES Winter Meeting 2012 in Chicago.

We have compared the elicitation mechanisms with respect to their ability to reveal good assessments of subjective probabilities, and we have studied the relationship between calibration and discrimination indexes. Two additional questions can be raised in this appendix, namely: Is there a learning effect in the use of the rule and/or in the metacognitive abilities? And how can we explain the strong heterogeneity of discrimination between subjects?

It may be asked whether the ranking of rules is robust to learning effects. Indeed the QSR and the MP are cognitively demanding and we expect their performances to increase with practice. Furthermore, learning effects for a rule contribute to its substantive goodness. Our experiment is designed so as to offer subjects the opportunity of learning using feedback. It should be remembered that we use three blocks of questions. The second one corresponds to the perceptual task with feedback. The idea was to use this task as a training phase for the elicitation rule. Therefore, we can compare belief accuracy in the first and third blocks (where the tasks to be performed are quiz questions of similar difficulties, without feedback). We can also compare belief accuracy in the first half (the first 50 trials) and the second half (the last 50 trials) of the perceptual task. Tables 10 and 11 provide details about the learning effects in terms of calibration and discrimination abilities, under the three different rules. We also check whether the mean performances are affected by time.
Table 10

This table summarizes the values per subject (with SD) and the tests of differences between the first quiz and the second quiz of the experiment. A dot means no significant differences between the two parts, while we report P1 (resp. P2) to indicate that Part 1 (resp. Part 2) gives better performances with ** and * for, respectively, a level of significance at 5 and 10 %

This table summarizes the values per subject (with SD) and the tests of differences between the first 50 trials and the second 50 trials of the perceptual task. A dot means no significant differences between the two parts, while we report P1 (resp. P2) to indicate that Part 1 (resp. Part 2) gives better performances with ***, ** and * for, respectively, a level of significance at 1, 5 and 10 %

We find strong evidence for a learning effect in terms of discrimination for the MP. Indeed, the level of the ROC area increases in both tasks in the second part, while the DI increases only in the perceptual task. An increase of the ROC area is also observed for the two other rules in the perceptual task, but to a lower extent. This increase for the MP may reflect a better understanding of the rule with its use. In terms of calibration, we observe a tendency to higher overconfidence in the second part of the perceptual task. But, as the mean level of success also decreases, it reveals more a tendency for subjects to be less focused at the end of the experiment.

To conclude, we stress the strong heterogeneity we found in individuals’ discrimination abilities. In our experiment, discrimination ability—as measured by the ROC area—ranges from 0.50 to 0.80.16 In other words, some subjects are almost unable to discriminate at all, while others perform remarkably well. In economics, most research focuses on overconfidence (Camerer and Lovallo 1999; Biais et al. 2005; Blavatskyy 2009; Clark and Friesen 2009). So far, discrimination has not received much attention, while it is certainly as important as calibration in explaining economic behavior. Among cognitive abilities, much attention is devoted to IQ measures, intelligence being considered as the main causal factor for many types of behavior. Since in the quiz, 12 questions out of 72 were logic questions, we built a specific logic score and compared it to metacognitive abilities. Table 12 indicates the correlations of this logic score with overconfidence, as well as with the ROC area for both tasks.17
Table 12

Correlations between the logic score and quality judgment