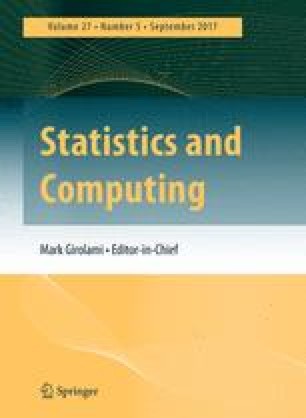 Leave-one-out cross-validation (LOO) and the widely applicable information criterion (WAIC) are methods for estimating pointwise out-of-sample prediction accuracy from a fitted Bayesian model using the log-likelihood evaluated at the posterior simulations of the parameter values. LOO and WAIC have various advantages over simpler estimates of predictive error such as AIC and DIC but are less used in practice because they involve additional computational steps. Here we lay out fast and stable computations for LOO and WAIC that can be performed using existing simulation draws. We introduce an efficient computation of LOO using Pareto-smoothed importance sampling (PSIS), a new procedure for regularizing importance weights. Although WAIC is asymptotically equal to LOO, we demonstrate that PSIS-LOO is more robust in the finite case with weak priors or influential observations. As a byproduct of our calculations, we also obtain approximate standard errors for estimated predictive errors and for comparison of predictive errors between two models. We implement the computations in an R package called loo and demonstrate using models fit with the Bayesian inference package Stan.

Appendix: Implementation in Stan and R

Appendix 1: Stan code for computing and storing the pointwise log-likelihood

We illustrate how to write Stan code that computes and stores the pointwise log-likelihood using the arsenic example from Sect. 5.3. We save the program in the file logistic.stan:

We have defined the log-likelihood as a vector log_lik in the generated quantities block so that the individual terms will be saved by Stan.6 It would seem desirable to compute the terms of the log-likelihood directly without requiring the repetition of code, perhaps by flagging the appropriate lines in the model or by identifying the log likelihood as those lines in the model that are defined relative to the data. But there are so many ways of writing any model in Stan—anything goes as long as it produces the correct log posterior density, up to any arbitrary constant—that we cannot see any general way at this time for computing LOO and WAIC without repeating the likelihood part of the code. The good news is that the additional computations are relatively cheap: sitting as they do in the generated quantities block (rather than in the transformed parameters and model blocks), the expressions for the terms of the log posterior need only be computed once per saved iteration rather than once per HMC leapfrog step, and no gradient calculations are required.

Appendix 2: The loo R package for LOO and WAIC

The loo R package provides the functions loo() and waic() for efficiently computing PSIS-LOO and WAIC for fitted Bayesian models using the methods described in this paper.

These functions take as their argument an \(S \times n\) log-likelihood matrix, where S is the size of the posterior sample (the number of retained draws) and n is the number of data points.7 The required means and variances across simulations are calculated and then used to compute the effective number of parameters and LOO or WAIC.

The loo() function returns \(\widehat{\mathrm{elpd}}_\mathrm{loo},\widehat{p}_\mathrm{loo},\mathrm{looic} =-2\, \widehat{\mathrm{elpd}}_\mathrm{loo}\) (to provide the output on the conventional scale of “deviance” or AIC),8 the pointwise contributions of each of these measures, and standard errors. The waic() function computes the analogous quantities for WAIC. Also returned by the loo() function is the estimated shape parameter \({\hat{k}}\) for the generalized Pareto fit to the importance ratios for each leave-one-out distribution. These computations could also be implemented directly in Stan C++, perhaps following the rule that the calculations are performed if there is a variable named log_lik. The loo R package, however, is more general and does not require that a model be fit using Stan, as long as an appropriate log-likelihood matrix is supplied.

Using the loo package. Below, we provide R code for preparing and running the logistic regression for the arsenic example in Stan. After fitting the model we then use the loo package to compute LOO and WAIC.9 The printed output shows \(\widehat{\mathrm{elpd}}_\mathrm{loo},\widehat{p}_\mathrm{loo},\mathrm{looic}{} \), and their standard errors:
By default, the estimates for the shape parameter \(\hat{k} { ofthe} { generalizedPareto} { distributionare} { alsochecked} { anda} { messageis} { displayedinforming} { theuser} { ifany} \hat{k}{} \) are problematic (see the end of Sect. 2.1). In the example above the message tells us that all of the estimates for \(\hat{k}{} \) are fine. However, if any  \(\hat{k}{} \)  were between  \(1/2\)  and  \(1\)  or greater than  \(1\)  the message would instead look something like this:

Model comparison To compare this model to a second model on their values of LOO we can use the compare function:
This new object, loo_diff, contains the estimated difference of expected leave-one-out prediction errors between the two models, along with the standard error:
Code for WAIC For WAIC the code is analogous and the objects returned have the same structure (except there are no Pareto \(k\) estimates). The compare() function can also be used to estimate the difference in WAIC between two models:

Here we show how to fit the model for the radon example from Sect. 4.6 and carry out PSIS-LOO using the rstanarm and loo packages.
After fitting the models we can pass the fitted model objects modelA and modelB directly to rstanarm’s loo method and it will call the necessary functions from the loo package internally.
This returns:

If there are warnings about large values of the estimated Pareto shape parameter \({\hat{k}}{} \) for the importance ratios, rstanarm is also able to automatically carry out the procedure we call PSIS-LOO+ (see Sect. 4.7). That is, rstanarm can refit the model, leaving out these problematic observations one at a time and computing their elpd contributions directly. Then these values are combined with the results from PSIS-LOO for the other observations and returned to the user. We recommended this when there are only a few large  \({{\hat{k}}}{} \)  estimates. If there are many of them then we recommend \(K\)-fold cross-validation, which is also implemented in the latest release of rstanarm.

To implement \(K\)-fold cross-validation we repeatedly partition the data, with each partition fitting the model to the training set and using it to predict the holdout set. The code for cross-validation does not look so generic because of the need to repeatedly partition the data. However, in any particular example the calculations are not difficult to implement, the main challenge being the increase in computation time by roughly a factor of \(K\). We recommend doing the partitioning in R (or Python, or whichever data-processing environment is being used) and then passing the training data and holdout data to Stan in two pieces.

Again we illustrate with the logistic regression for the arsenic example. We start with the model from above, but we pass in both the training data (N_t, y_t, X_t) and the holdout set (N_h, y_h, X_h), augmenting the data block accordingly. We then alter the generated quantities block to operate on the holdout data:

LOO could be also implemented in this way, setting  \(N_t\) to \(N-1\)  and  \(N_h\)  to 1. But, as discussed in the article, for large datasets it is more practical to approximate LOO using importance sampling on the draws from the posterior distribution fit to the entire dataset.