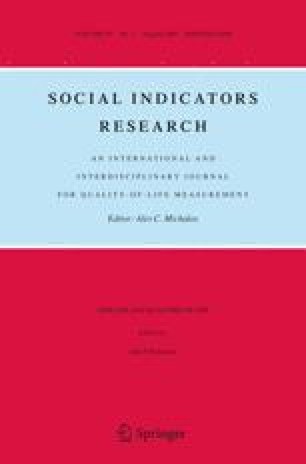 Trends in Free Time with a Partner: A Transformation of Intimacy?

Leisure Activity Free Time Marital Satisfaction Shared Time Dual Earner Couple
These keywords were added by machine and not by the authors. This process is experimental and the keywords may be updated as the learning algorithm improves.

Shared free time with one’s spouse is positively related to marital satisfaction (e.g. Crawford et al. 2002). Yet little is known about the amount of time partners actually spend together and its trend over time. This article investigates how much free time couples spend in each other’s presence, how this has changed over the last four decades and to what extent this is related to changed circumstances. Also, differences between men and women herein are assessed.

There are two main theoretical views on trends in the shared time of partners.To establish whether the nature of marriage has changed over time, several characteristics that may have changed over time as well should be controlled for. First, whereas gender differences became smaller with respect to paid work and domestic work, they increased in the amount of free time, especially after marriage and having children (Mattingly and Bianchi 2003). Second, over recent decades, people have fewer children and at a later age (Johnson 2000). Care for children diminishes the time available for joint leisure, so couples with children have less shared free time (Hamermesh 2000). Third, changes in paid work, especially the increasing labor force participation of women, have led to more difficulties combining work and family life (Van der Lippe et al. 2006).

Free-time activities included: (1) attending sports events, (2) going to the cinema, theatre, concert, opera, museums and exhibitions, (3) going to a restaurant, café, bar, party or reception, (4) receiving or visiting friends and other in-home social activities, (5) arts, crafts and hobbies, (6) watching television, and (7) listening to radio or music. The number of minutes spent in these activities was summed, as were the minutes spent in these activities in the presence of a partner. Besides the partner others, such as children, could be present as well. The relative share of leisure in the presence of a partner could then be calculated with a mean of 67 percent.

Three regression models were estimated separately for men and women, using the proportion of shared leisure as the dependent variable. In the first model all variables were included. Models 2 and 3 show results for different interactions of the independent variables with the year 2003 to assess whether some characteristics have a different impact on shared leisure time in later years. Differences between coefficients for men and women were tested using seemingly unrelated estimation.

The second step in the analysis was to assess to what extent these differences are attributable to varying characteristics and varying importance of these characteristics between the years. Table 1 shows the results of the regression analysis for men and women separately, with Model 1 showing that, controlled for varying characteristics, both men and women spent an increasing part of their leisure in the presence of a partner in 2003 compared to 1975. Additional tests support that the increase was higher for women than for men. Children had a negative impact on leisure in the presence of a partner, for women and men both (there were no significant differences).
Table 1

Interestingly, men that were part of a dual earner couple reported lower levels of leisure in the presence of a partner, whereas the association was positive for women. Finally, shared leisure on a weekday was less common than on a weekend day, and this effect was significantly stronger for women than for men. When both spouses were unemployed, this negatively affected leisure in the presence of a partner for women, but not for men.

In Models 2 and 3 interaction effects were added. Only significant interactions are presented. Model 2 includes an interaction term of children under the age of five with year, and it shows that although the presence of children in the household had a negative effect on the proportion of shared leisure, this was much less so in 2003 compared to earlier years. These findings suggest that the presence of children is less consequential for couples’ free time now compared to earlier years. No significant differences between men and women were found here. Model 3 shows that the negative effect of being part of a dual earner couple on leisure in the presence of a partner was less strong in 2003 compared to 1975.

The low explained variance indicates that the proportion of leisure spent in the presence of a partner was difficult to predict and apparently dependent on factors that were not included in the model (like characteristics of the partner).

Not only in proportions, but also in absolute minutes, partners spend more time together in leisure now than 40 years previously. This increase in shared leisure is in line with Giddens’ (1990) idea of a ‘transformation of intimacy’. This change, which is especially strong for women, persists after controlling for changes in social circumstances over the years supporting theoretical research that psychological gratification is more central (Bellah et al. 1985) and that partners over time have come to construct their own forms of togetherness (Beck and Beck-Gernsheim 2001). Despite the increased inequality in the growth of free time for men and women (Mattingly and Bianchi 2003; Sayer 2005), couples do still seem to find ways to spend increased time together.

Our results further indicate that the importance of certain characteristics for partner co-presence at leisure activities varies over the years, and differs for men and women. The presence of children and being part of a dual earner couple in later years seems less restrictive to shared leisure. The gender discrepancy diminished in later years, indicating more gender equality. Being part of a dual earner couple has opposite effects for men and women. Perhaps a less available spouse makes men less likely to engage in shared leisure activities, whereas working women may have less leisure time available, but are more likely to spend it with their spouse. This finding warrants further research.

Limitations of this study are the use of an indirect measure of intimacy, which does not include how the marriage is experienced, and analyzing individuals rather than couples. Notwithstanding its limitations, this study has provided a first glimpse into couples’ spending increased amounts of free time together.