International Journal for Philosophy of Religion 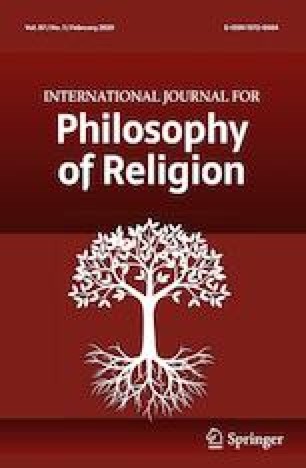 International Journal for Philosophy of Religion

As this new year is upon us, I am happy to celebrate a new face for our journal. This new look has been a long time in coming and in this first issue of this new year it has finally been realized. I hope it is agreeable to all. Special thanks go to the good advice I received from the Editorial Board and from the Associates for the Philosophy of Religion. A special thanks goes out to John Schellenberg for his helpful suggestions.

This issue is devoted largely to the work of Soren Kierkegaard, with a little help from a kindred sprit Blaise Pascal.

In the first article, Kasper Lysemose takes his place in a growing literature commenting on Kierkegaard’s Works of Love. Rather than pursuing the usual path of contrasting neighbor love and preferential love, which Kierkegaard invites us to consider, Lysemose undertakes to show that love is a promise, not of something, but not of nothing either. What is promised is a kind of creation that establishes an opening for the eternal to come into time. Following the lead of contemporary continental drifts in the philosophy of religion, he says: “Love, however, is not something promised to come. It is the promise itself. It is the ‘to come’”. I read him as suggesting that the promise of love is a kind of plunge, as all promises are, and as such similar to what Kierkegaard might call leaps of faith. For Lysemose, like Kierkegaard, we are separate individuals; this is our pain and our glory: we are unique but as such separated form every other unique individual, as though we have nothing in common. Perhaps this mirrors the way that the Creator is wholly other than his creatures. And yet in the face of this separateness, the promise of love is a way of drawing us as separate individuals into a mode of being with each other. This crossing of the gap between us does so without undoing solitude, but by opening us to something in common between us. So, we who have nothing in common, find a way to commonness, a path to community, a path that brings us near to each other, perhaps near to God.

Our next article carries on this continental drift. Here Heather Ohaneson takes on the familiar worry that Kierkegaard has undervalued, if not abandoned, the role of reason in faith. The view that Kierkegaard has no place for reason is invited by his emphasis on unreason, madness, absurdity and paradox. However, with the help of Foucault, the author raises the question as to whether, or how far, reason is to be separated from madness. Foucault and Kierkegaard share a suspicion of the Enlightenment concept of pure reason. Both urge us to give up on such a concept of reason that sets it in opposition to madness. They both smudge the borders between the two. And linking this essay to the previous one, it may appear that the relationship between reason and madness may be like the relationship between separate individuals. As single individuals, it may appear that I and you are radically separate from one another in the way that reason is radically separate from madness. Foucault suggests that there may be a closer relationship, in both cases, you and me, and reason and madness—a closeness that Kierkegaard did accept but perhaps should have made more of. The suggestion is that there is a kinship between me and you, between reason and madness that often goes unrecognized, unacknowledged.

Andrzej Jan Slowikowski contrasts Kierkegaard’s concept of forgiveness with contemporary secular and Christian ethical formulations of it. These formulations take an immanent point of view that appeals to the world of human values rather than the point view of transcendence. Several issues are discussed to make this contrast clear. These include the victim-offender relation, the conditionality and unconditionality of forgiveness, the issue of condonation, and the problem of the unforgivable. The author shows that Kierkegaard’s concept of forgiveness cannot be appropriated in a wholly immanent ethics. Nevertheless, his concept of forgiveness is not useless for immanent ethical theories of forgiveness, at least if love is understood as identical with a transcendent ethics. As the author says: “If love is to be deemed a synonym of transcendent ethics and its concomitant understanding of forgiveness… then one can see that Kierkegaard’s account does not negate immanent accounts, but instead gives them a higher-order reference point in which they find their ultimate definition.”

In our penultimate essay, Petr Vaškovic draws an interesting parallel between Kierkegaard and Dostoevsky. He argues that both thinkers call on their readers to traverse a similar transformational path from inauthentic existence to an authentic Christian existence founded on love. He thinks that both existentialists shared the common goal of persuading their readers to undergo this transformation. As I read the essay, I think the author might agree that their common aim could be expressed not just in terms of persuasion but also and importantly in terms of terms of invitation. The author argues that both share a sense that human life raises a disturbing question: how do I deal with the fact that my own existence is intrinsically tied to the possibility of despair? Although the author expresses this in terms of the problem of human existence, I think he would agree that neither Kierkegaard nor Dostoevsky see existence as a problem to be solved, but as an existential reality to be confronted.

Finally, we turn from Kierkegaard to an important predecessor, Blaise Pascal. There could hardly be more agreement between the two than on the sentiment expressed by Pascal, to wit, “the heart has reasons that reason knows not of”. And there is common ground in thinking that the leap of faith is like a wager of sorts. And some have thought that the two shared the conviction that the either/or of faith sets before us, presents us with only two options: Christianity or atheism. Samuel Lebens challenges this neat dichotomy. He argues that the call to faith presents us with more than two options. The fact is, there are many gods, a point of criticism that Pascal (and I would add Kierkegaard) does not fully appreciate. The author offers a response to a narrow menu of possible wagers and concludes that there may be multiple Pascals: a Jewish one, a Christian one, a Muslim one, and more. This suggests that those who ignore the idea that there is either no religion or only one true religion are to be praised for not taking Pascal’s narrow version of the wager.