Journal of Thermal Analysis and Calorimetry 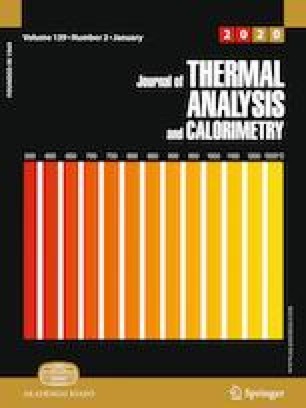 Journal of Thermal Analysis and Calorimetry

Ultrahigh molecular weight polyethylene (UHMWPE) is an excellent thermoplastic crystalline plastic [1, 2, 3, 4]. In comparison with other polyethylene, UHMWPE has lower coefficient of friction [5, 6, 7], higher mechanical strength [8, 9] and abrasion resistance [10, 11, 12]. Thus, UHMWPE has a wider foreground of application for pipeline industry [13, 14], biological medicine [15, 16, 17], textile industry [18, 19] and so on. Nevertheless, UHMWPE has extremely high molecular weight so that it is difficult to be processed by common processing method. Aim at this situation, a lot of researchers prepared a series of UHMWPE-based compounds to improve its performance [9, 20, 21, 22, 23, 24]. Meanwhile, UHMWPE as a crystalline polymer, addition of other materials can change the crystallization property of UHMWPE, which can influence the UHMWPE performance [25, 26, 27, 28, 29]. Therefore, it is necessary to study the crystallization behavior of modified UHMWPE materials.

Sattari et al. [30] reported the non-isothermal crystallization and melting behavior of UHMWPE hybrid composites reinforced with short carbon fiber (SCF) and nano-SiO2 particles. It is observed that adding SCF to UHMWPE increased the melting peak temperatures and the crystallinity of UHMWPE. The amounts of nano-SiO2 had no obvious effect on melting temperatures of UHMWPE and decreased the crystallinity of UHMWPE. Ozawa–Avrami method can be used to describe the non-isothermal crystallization kinetics of the composites.

In order to obtain acrylic acid (AA)-modified calcium carbonate (AA-CaCO3), 500 g CaCO3 was added in 2.5 L ethyl alcohol at room temperature, then 40 g AA was added and stirred 20 min by mechanical stirring so that CaCO3 reacted with AA thoroughly. Then, the solvent was volatilized at room temperature, and the product of AA-modified calcium carbonate (AA-CaCO3) was dried in at 80 °C for 1 h.

Effect of modified-CaCO3 on non-isothermal crystallization behavior of UHMWPE

Effect of modified-CaCO3 on non-isothermal crystallization kinetics of UHMWPE

Some models were used to describe the non-isothermal crystallization kinetics of polymer and its blends and composites, including Ozawa, Jeziorny and Mo models, etc. In our work, effect of modified-CaCO3 on non-isothermal crystallization kinetics of UHMWPE was investigated by the Avrami theory modified by Jeziorny and Mo models.

Kinetic parameters of UHMWPE and its composites from Jeziorny method