Journal of Superconductivity and Novel Magnetism 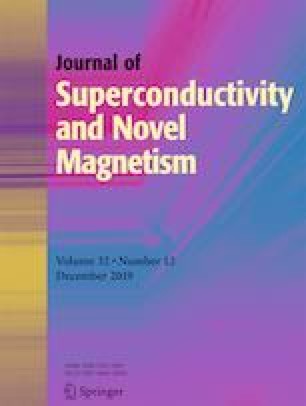 Journal of Superconductivity and Novel Magnetism

In this work, we tried to improve the superconducting performance of bulk YBa2Cu3Oy (Y123) superconductors via Y2Ba1Cu1O5 (Y211) secondary phase refinement. A novel method of ultra-sonication was used to refine the Y211 secondary phase particles. The Y211 powder was treated by ultra-sonication for 0 to 80 min with steps of 20 min, keeping the power (300 W) and frequency (20 kHz) constant. For synthesis of the YBCO bulk, we employed top-seeded melt growth (TSMG) with Pt addition. Magnetization measurements showed a superconducting transition temperature at around 91 K, irrespective of ultra-sonication parameters. Interestingly, critical current density and trapped field were found to be proportional to the ultra-sonication duration. YBCO bulk sample (20 mm diameter, 7 mm in thickness) fabricated for 80 min ultra-sonicated Y211 showed a maximum trapped field of 0.42 T at 77 K, 0.3 mm above the top surface. The improved trapped field values are explained on the basis of improvements in the microstructure.

Top-seeded melt growth (TSMG) has emerged as a typical process for fabricating large single-grained (RE)Ba2Cu3Oy (REBCO) high-temperature superconductors (HTS), where RE refers to rare earth elements such as Nd, Gd, Er, and Y [1]. In the TSMG process, RE123 is heated above the peritectic temperature resulting in decomposition of RE123 into RE211 and liquid phase (BaCuO2 and CuO). The samples are then slowly cooled, when RE211 reacts with liquid phase to form RE123 bulk superconductor [2]. Bulk REBCO superconductors are mostly used in practical applications such as flywheel energy storage systems, magnetic bearings, trapped field magnets, etc. [3, 4, 5]. For achieving good superconducting performance, it is necessary to obtain high superconducting critical current density (Jc) and trapped flux density (BT) at high temperatures and high fields [6]. Critical current density in YBa2Cu3Oy (Y123) bulk superconductors can be improved by reducing the size of Y211 particles and by increasing the homogeneity of Y211 distribution in the matrix [7]. The microstructural defects also contribute to increase of magnetic flux pinning and hence enhance the critical current density (Jc) and trapped field (BT) [8]. The effect of Y211 precipitates is usually observed at low magnetic fields as they contribute as δl pinning and hence result in a high self-field critical current density. On the other hand, point-like defects and oxygen off-stoichiometric phases generally contribute as δTc pinning and result in peak effect or high critical current densities at high magnetic field [9, 10]. Several researchers have tried to avoid Y211 particles coarsening with help of chemical agents such as Pt, CeO2, etc. [11, 12]. In case of Pt and PtO2 addition, it was seen that a new Ba4CuPt2O9 phase forms, which acts as nucleating site for Y211, thereby restraining the Y211 growth [12]. In addition, there is also evidence that adding Pt/PtO2 results in more anisotropic and highly acicular Y211 particles. On the other hand, CeO2 aids in different manner. It forms BaCeO2 phase alongside the Y211 that contributes to additional pinning. Another alternative technique to control Y211 particles size in the initial powder is by introducing mechanical force to refine particle via ball milling technique, etc. [13, 14]. Although this technique results in particles of around 70 nm, it also imparts contamination into powder. To refine further and ensure uniform mixing, the precursor mixture of Y123 and Y211 is subjected to automatic grinding for 2–3 h. To avoid any contamination in the powders, we chose high energy ultra-sonication to refine the Y211 particles. The ultra-sonic waves increased disorder in the medium and lead to separation and size reduction of the particles [15, 16]. In summary, the nature of initial Y211 particles greatly influences properties of bulk YBCO (see in Table 1).
Table 1

In our previous work, we tried to synthesize samples by infiltration growth using ultra-sonicated Y211 [15]. There we synthesized bulk with improved properties because of Y211 size reduction. In this paper, we studied the optimization of ultra-sonication process parameters for producing fine Y211 particles and effect of refined Y211 particles size on the superconducting properties of melt grown YBCO bulk superconductors. YBCO single grain superconductors of 20 mm were fabricated by top-seeded melt growth. Systematic study was done by varying the ultra-sonication time, and superconducting properties were compared with highlight the best processing conditions.

To prepare YBa2Cu3O7 (Y123) and Y2BaCuO5 (Y211), high-purity commercial powders of Y2O3, BaO2, and CuO were mixed in a nominal ratio. This Y123 raw mixture was calcined 4 times at around 870–940 °C for 24 h. Similarly, Y211 raw mixture was also calcined 4 times at 840–900 °C for 15 h. In order to reduce the particle size of the calcined Y211 powder, we used Mitsui ultrasonic homogenizer UX-300, while keeping constant power (300 w) and frequency (20 kHz). Y211 powders were dissolved into ethanol and ultra-sonicated systematically for various durations such as 0, 20, 40, 60, and 80 min and the corresponding final samples can be referred as Y0, Y20, Y40, Y60, and Y80, respectively. The Y211 and Y123 powders were mixed in 1:2 ratio along with 0.5 wt% of Pt and was pulverized for 2 h, which were then pressed into several pellets of 20 mm diameter. Nd-123 seed was placed on the top of pelletized precursor mixture. The temperature profile used for fabricating samples for TSMG is given in Fig. 1. After melt processing, the Y123 samples were annealed at 450 °C for 400 h in controlled oxygen atmosphere for oxygenation. The phases present in the bulk were identified by X-ray diffraction (XRD) using Rigaku X-ray diffractometer with Cu radiation and Bragg–Brentano geometry with 2θ from 10 to 80°. The diffraction peaks were indexed with the help of reference data from JCPDS (joint committee on powder diffraction standards). For trapped field measurements, we used permanent magnets of 0.5 and 1 T to activate Y123 bulk superconductor. Field distribution was measured by automatic scanning Hall probe sensor at a distance of 0.3 mm (surface touched) and 1.3 mm (1 mm above surface) above the superconductor surface. This is because of the 0.3 mm difference between probe’s epoxy surface and the hall probe. The microstructures were studied with a field emission scanning electron microscope (FE-SEM). For magnetic measurements, samples were cut 2 mm below the seed along the c-axis from the bulk samples 1.5 × 1.5 × 0.5 mm3 in dimension. Superconducting transition temperature (Tc) and magnetization loops in field from 0 to 5 T were measured at 77 K using a commercial SQUID magnetometer (model MPMS5). Superconducting critical current density (Jc) was estimated by using the extended Bean’s model [17].
$$ {J}_c=\frac{20\Delta M}{a^2c\left(b-\frac{a}{3}\right)} $$
where a and b are the cross sectional dimensions with b ≥ a, c is the thickness of sample, and ΔM is the difference of magnetic moment between decreasing and increasing field in the M-H loop.

Among various durations, 80 min of ultra-sonication seemed to be the optimum for refining Y211 powder based on the particle size and uniform shape of Y211 powder. We have successfully prepared YBCO bulk consisting of Y123 and Y211 mixed in a molar ratio of 10:5 with 0.5 wt% Pt by TSMG processing. XRD clearly shows that all the bulk Y123 samples have good texture and pure single grain nature. All samples exhibited superconductivity with Tc ~ 92.8 K and sharp superconducting transitions. The highest critical current density (Jc) was observed in 80-min ultra-sonicated bulk which was measured to be 47 kA/cm2 at self-field and 77 K. For the same bulk at 77 K, the trapped field measurements exhibited single uniform conical peak with the maximum value of 0.42 T at the center. SEM observations showed that the particle sizes of the most Y211 particles have been reduced to 1–2 μm and uniformly dispersed within the final Y123 matrix which led to the improvement in the superconducting properties of Y123 bulk superconductor. The ultra-sonication technique has great potential to refine Y211 particles for mass production of large high performance YBCO bulk superconductors for practical applications. In addition, this technique is cost-effective and brings nearly no contamination. All these features make it a best choice for mass production.

This work was partly supported by Shibaura Institute of Technology (SIT) Research Center for Green Innovation and Grant-in-Aid FD research budget code 112282. Two of the authors (Sai Srikanth Arvapalli and Sunsanee Pinmangkorn) acknowledge the support from SIT for providing the financial support for the doctoral program.