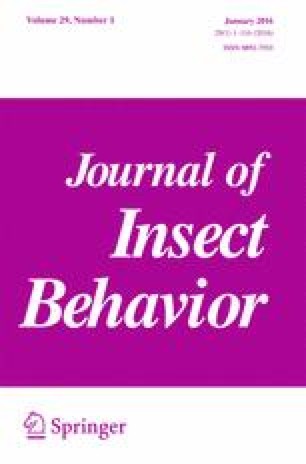 North American Photinus fireflies use bioluminescent flashes to communicate an individual’s species and sex, and to attract potential mates. A female firefly responds to a male firefly’s courtship flash with her own species-specific flash. We used a photic stimulator to produce male-like species-specific P. carolinus LED courtship flashes. These evoked species-specific response flashes from a female. The female’s flashes were preceded by a flash gesture comprising a sequence of abdominal postural adjustments (pitch, roll, and yaw). These gestures changed her lantern’s orientation which, at rest, was downward towards the substrate. Our results demonstrate that these gestures mediate a lateralization of the female’s response flashes towards the direction of the stimulating LED. That is, she directs her response to the left of midline when stimuli are presented from her left, and similarly, she directs her response to the right of midline when stimuli are presented from her right. The directional aspect of the flash gesture adds a new perspective to the complexity of the behaviors associated with flash communication in fireflies. Lateralization of the flash gesture suggests that the female’s visual system processes information about the location of male’s flashes as well as their temporal pattern.

We thank L. Faust and H. Almarshad for help with the field work, V. Kask for illustrating the female’s posture, K. Langdon and B. Nichols (National Park Service, Great Smoky Mountains National Park) for numerous kindnesses in the National Park, and U. Sterling for her encouragement. Supported by the University of Connecticut and Georgia Southern University.

Video of postural movements towards the same side as the stimulus. Video was obtained at 30 frames per second. Frames were numbered sequentially relative to the beginning of the female’s doublet-flash (Frame 0). Selected frames from this sequence were used for Fig. 2. The video is shown in real-time and in slow motion. (MP4 67130 kb)