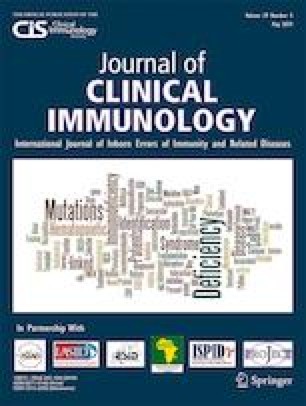 Ikaros is a transcription factor with key roles in lymphocyte development and homeostasis. It is encoded by the IKAROS family zinc finger protein 1 (IKZF1) gene, which contains highly conserved N-terminal and C-terminal zinc finger domains and is highly expressed in hematopoietic cells. The functions of Ikaros were first illustrated in different sets of IKZF1-deficient mice. In humans, IKZF1 loss-of-function (LOF) somatic variants are associated with leukemogenesis in B cell acute lymphoblastic leukemia (B-ALL) [1]. More recently, different germline heterozygous variants, acting either by haploinsufficiency or by a dominant negative effect in IKZF1, were identified in autosomal dominant forms of common variable immunodeficiencies (CVID) or combined immunodeficiencies (CID) [2, 3, 4]. A series of families showed a progressive loss of B cells and hypogammaglobulinemia, but the absence of symptoms in several mutated patients suggests an incomplete penetrance. Additional...