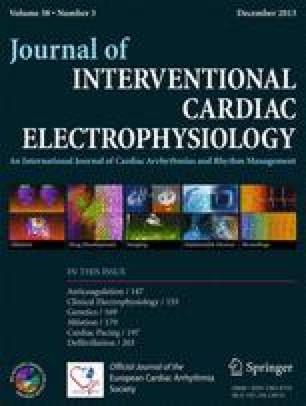 Rotors of two different left atrial flutters were mapped using focal impulse and rotor modulation and 3D-MRI overlayed on live fluoroscopy and were successfully ablated in a patient with two prior left-atrium ablation procedures for recurrent atrial fibrillation.

In conclusion, two different LA flutters were mapped using FIRM and 3D-MRI overlayed on live fluoroscopy and were successfully ablated in a patient with two prior LA ablation procedures for recurrent persistent AF.

Dr. Michael Orlov has received research grant support and is on the advisory board of Philips Healthcare.

The authors do not have any financial relationship with the organization that sponsored the research (Topera Inc., San Diego, CA).

Basket mapping catheter deployment into the LA under the guidance of a 3D-MRI of the LA (blue shell) overlayed on live fluoroscopy in AP view. The ablation catheter and transseptal sheath are seen in the LA via a single transseptal approach. The CS catheter is also shown. Registration of the LA shell on live fluoroscopy is performed using the bronchial carina (yellow) as an anatomic reference. The LA appendage is shown in light blue. (MPG 3942 kb)