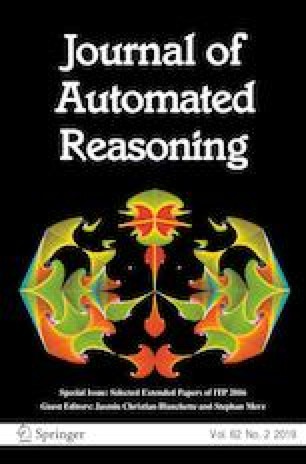 Interactive Theorem Proving (ITP) is the premier international conference devoted to interactive theorem proving and related subjects, ranging from theoretical foundations to implementation aspects and applications in program verification, security, and the formalization of mathematics. The seventh edition of ITP took place in August 2016 at the Inria research center in Nancy, France. Its proceedings appeared as volume 9807 of Lecture Notes in Computer Science, published by Springer.

The present issue of the Journal of Automated Reasoning contains six articles based on papers presented at ITP 2016. The authors were invited to submit revised and extended versions of their papers, and these were subject to a stringent peer-reviewing process. The articles explore a broad range of applications of interactive theorem proving in mathematics and computer science. Taken together, they witness the current state of the art of the field.We are grateful to the editor-in-chief, Tobias Nipkow, and to the editorial office of Springer for the excellent collaboration in producing this special issue. We thank the authors for their diligence in revising the papers presented at ITP 2016, ensuring that the articles published here present significant additional contributions. The anonymous reviewers did a wonderful job in providing timely, in-depth reports that have contributed substantially to the quality of this issue.