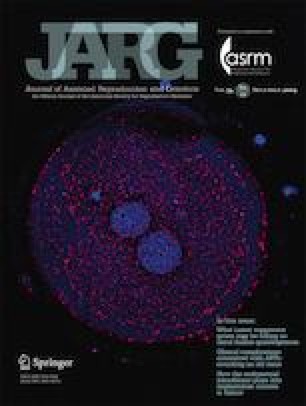 Pregnancy loss: more a matter of chromosomes or maternal discretion?

“The most erroneous stories are those we think we know best - and therefore never scrutinize or question.”

The stories we tell bear elements of truth and untruth. We derive the data at hand when a story is born, invoking the instruments available and observational skills inherited from the previous generation of story tellers. The resident untruths embedded in our stories need not take on the air of “fake news” as we know of them today. Rather untruths take their genesis from any range of well-intentioned or mal-intentioned observers operating within the boundaries of technological limitations, so often difficult to identify, let alone able to admit that they exist.

As we launch the 2020 campaign of JARG, we look forward from the last decade of story-telling in human ARTs and genetics replete with discovery and ambiguity over the beginnings of human development. While maintaining a purpose geared towards understanding the causes of infertility and advancing interventional strategies for its treatment, our collective role for society has been and will continue to be verifying and validating common and basic principles from formation of gametes and embryos. This occurs through to the establishment and completion of pregnancies- the story of how human life begins. In future months, we plan to bring our readers various detailed treatments of topics as wide-ranging as reproductive aging, genetic testing, biomedical imaging, cryobiology, preservation of fertility, artificial intelligence, embryo culture ex vivo and beyond. The plate is indeed filled. Meanwhile, the need is ever so great to tell the stories of the next decade of human ARTs with as much truth as possible thanks to the tireless efforts and discretionary dedication of our many authors, reviewers, and editorial board members.

The story featured in this month’s issue is pregnancy loss. Known generally as a failure of immense proportions to our psyches, miscarriages, recurrent pregnancy loss, abortions occurring after natural or ART mediated pregnancy have historically engaged a degree of finger pointing to one of two culprits: the old adage asks whether it is the seed or the soil? The embryo or the uterus? The new genetic entity or mother’s prerogative?

As featured on our cover this month, the human embryo is now known to have an inherent capacity to undergo the first two weeks of normal development in the absence of the uterus. Remarkably, this amount of out-of-context development entails formation of embryonic and extraembryonic structures, comprised of discrete cell types expressing the array of genes expected in embryos that undergo implantation in vivo. Despite this extraordinary manifestation of autonomy and self-organization, not all human embryos maintained in culture can achieve development to this extent, nor are they able to mimic implantation (by attaching and spreading on artificial substrates). Here the tale of our embryonic origins must take a turn to the story that we think we know best- pregnancy loss.

Unlike Gould’s comment above, the notion that genetic aberrations in the embryo underly the majority of pregnancy losses has been dutifully scrutinized and questioned by three generations of physicians and scientists. Why not continue this line of curiosity given its prevalence? Or needing to investigate why human fecundity (pregnancy loss) ranks so low on the totem pole of reproductive efficiency globally?

Among the things we think we know best is that the majority of pregnancy loss from these instances is due to various chromosomal aberrations in the conceptus and its byproducts. It has been nearly 20 years since the landmark paper by Hassold and Hunt drew particular attention to the subject of gender indifferent chromosome errors in meiosis in the context of aging and prospects of environmental intrusion of this sacred gonadal process at the heart of our fecundity [1]. These are some well-established areas where the study of chromosomes retain a rightful place in the annals of reproductive biology and medicine. Most familiar to us, of course, is the association between deviations of normal diploid numbers of chromosomes, to a state of too many or too few. A condition known as aneuploidy arising from errors in chromosome segregation during the first or second meiotic divisions, more commonly in the oocyte (compared to meiosis in the male). Just how bad is aneuploidy? It constitutes one of the major driving forces underlying Klinefelter’s, Turner’s and Down’s syndromes, the latter of which demonstrates a maternal age effect [2]. More to the point, pregnancy loss is believed to be a consequence of gametic aneuploidies originating during gametogenesis.

If that were not bad enough, aneuploidy seems to be a determinant on the road to cancer progression, for these cases are a result of aberrant chromosome segregation during mitosis [3]. Therefore, from miscarriages to cancer, aneuploidy looms heavily in pathological states. Only recently has it given us an alternative explanation for the chromosome’s bad behavior in the context of human embryos. Before going there, it will be worthwhile considering the latest studies on meiotic aneuploidy over the fertile lifespan of humans. The breakthrough paper by Gruhn and colleagues last year expanded our insight on how aging affects chromosome balance in human oocytes. It seems that the dance of meiotic chromosomes is susceptible to missteps at both ends of our reproductive lifespan (not just advanced maternal age). Apparently, distinct mechanisms modulate the interactions of our 23 homologous chromosome pairs with spindle components along the pathway to becoming balanced haploid contributions to newly formed zygotes [4]. With respect to congenital malformations, it is interesting to note that years ago, the tendency to see the so-called U-shape curve prior to and after our peak times of fecundity did not go unnoticed [5].

Now back to the embryo and its contribution to pregnancy loss. As noted above, attributing the demise of the embryos inheriting its imbalances of chromosomes from the oocyte, or sperm for that matter, as a result of meiotic mismanagement has been a story for the ages. Now, yet another culprit has reared its ugly head in the craze to associate chromosomes with pregnancy loss. Perhaps the new mantra should be “To err is meiotic…AND mitotic!” How so? The widespread utilization of PGT-A, as a selection screen to weed out transfer of embryos of the “genetically-incompetent” variety (aneuploids, mosaics etc) has confirmed just how rare a euploid embryo is within our species, at least based on the limited outcomes from trophectoderm biopsy reads. We shall uncover this in future issues, the role of genetic testing like PGT-A in a clinical sense is being re-evaluated, but in a basic science sense, these findings return us to the question of pregnancy loss and the origins of our understanding the role of meiotic and mitotic disturbances in early development.

The backdrop is clear. Historically, cytogenetics was used to establish trends for each human chromosome using dissected miscarriage specimens from cell outgrowths processed for karyotyping. Compiled data bases have recently confirmed trends between different geographical areas. The ability to examine this data with newer and advanced molecular diagnostics is gradually uncovering the chromosome distribution and dynamics present within spontaneous abortion material [6, 7]. This work remains as an important baseline to our understanding of the link between chromosomes and pregnancy loss, but is highlighting limitations inherent in earlier technologies that may in the end prompt rewriting the story.

Here is where the mindset needs a readjustment when understanding pregnancy loss. As well as a need to have a closer look at models of implantation that are aiding in the exploration of matters beyond the chromosome. This should serve to expand our thinking about how to manage recurrent pregnancy loss, distinguishing and recognizing the limits of our embryo selection. We must come face-to-face with the realization that so much more than just an embryo’s genotype can hold the secret to successful implantation.

Accordingly, we lead this off with a series of papers aimed at tackling the problem of pregnancy loss from a utero-centric vantage point. Factors common to both the embryo and endometrium must at an operational level mediate and guide adhesive interactions. Followed by the anchoring of two distinct cell surfaces, if permitted, leading to decidualization of the subtending stroma as it is invaded by syncytial trophoblast. Finally setting the stage for the completion of invasion and establishment of placentation. And to think that early failure to achieve this storyline results in regeneration of the endometrium making this tissue standout among those with regenerative capacities.

Our coverage starts with the work of Evans and colleagues from the Hudson Institute for Medical Research and Monash University in which they advance a model for probing adhesion properties at the interface between epithelium and trophoblast noting some interesting differences between the endometrial cells from fertile versus infertile patients (A novel “embryo-endometrial” adhesion model can potentially predict “receptive” or “non-receptive” endometrium;10.1007/s10815-019-01633). The strengths and weaknesses of this and other implantation models are then discussed by Aghajanova (How good are we at modeling implantation?; 10.1007/s10815-019-01667).

Li and colleagues then take a look at endometrial transcriptome complexity at a deeper level than previously commercialized tests for relevant properties of the elusive window of opportunity (Transcriptome sequencing of endometrium revealed alterations in mRNAs and lncRNAs after ovarian stimulation;10.1007/s10815-019-01624). Keeping stride with the evolving role of epigenetics and hormonal responses of the endometrium, Sun and collaborators target the “window” from a perspective of growing concern (Effects of high progesterone in in-vitro fertilization cycle on DNA methylation and gene expression of adhesion molecules on endometrium during implantation window10.1007/s10815-019-01632). In this vein, we also offer insights into the question of how currently deployed IUDs may impact the physiological balance and complexity of implantation after prolonged usage (Levonorgestrel IUD: is there a long-lasting effect on return to fertility? 10.1007/s10815-019-01623).

In closing our coverage of pregnancy loss, we share with our readership a fascinating twist of fate that comes from the collective studies of Jan Brossens and his colleagues over the past several years. Entertaining matters more than just chromosomes has been sparked by elucidating novel components of the endometrial immune system, the process of decidualization, and contextualizing the delicate life balance of cells making decisions to divide, differentiate, or die. Introducing the notion of maternal checkpoints operating within the endometrium is provocative in form and substance, and ironically may eventually contrast to the apparent lack of cell cycle checkpoints we have come to recognize for the embryo itself [8].

With this New Year, we wish to thank those editorial board members who have made valuable contributions and will be leaving the JARG family. Thank you Paula Amato, Paul Brezina, Bill Catherino, Nina Desai, Anil Dubey, Paulo Navarro-Costa, and Anna Viega. Joining as new board members will be Mindy Christiansen, Demian Glutovsky, Ann Kiessling, Angela Lawson, Igor Lebedev, and Manuel Viotti. We welcome you and appreciate your willingness to share your insights and expertise, as JARG continues its evolution into the next decade.