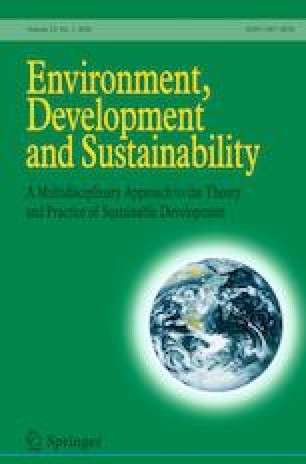 Genuine savings as a test of New Zealand weak sustainability

The key aims of this paper are to: (1) to extend the World Bank’s (WB) measure of genuine savings (GS) for New Zealand by using a longer time series of data, 1950–2015; (2) improve GS estimates for New Zealand by adding additional dimensions to GS, i.e. forestry; (3) investigate the relationship between several GS measures and the discounted values of GDP per capita and consumption per capita, used to proxy well-being; (4) test a series of hypotheses which relate GS to the change in future well-being using the framework proposed by Ferreira et al. (World Bank Econ Rev 22(2):233–248, 2008.  https://doi.org/10.1093/wber/lhn008) and (5) investigate the effects of a growing population on the availability of future capital stocks by considering the consequences of “wealth-dilution” as defined by Ferreira et al. (2008). The paper makes a contribution to the literature on GS, particularly in the context of New Zealand, by considering patterns of GS and well-being over a longer time span of data than have been previously used and add to a relatively small, but growing literature on tests of GS using long or relatively long time-series data [see, e.g. Greasley et al. (J Environ Econ Manag 67(2):171–188, 2014.  https://doi.org/10.1016/j.jeem.2013.12.001, Environ Dev Econ 22:674–98, 2017) and Hanley et al. (Enviro Resour Econ 63(2):313–338, (2016).  https://doi.org/10.1007/s10640-015-9928-7]. We conclude, based on the data used here, that New Zealand’s GS has been positive (i.e. weakly sustainable), since the start of our data series, even without allowing for the contribution of technological advancement. However, we also conclude that the effects of a growing population and a savings gap have led to a “wealth-dilution” effect needed to maintain real wealth per capita, as we estimate that there was an average savings gap (GS as a percentage of gross national savings) over the period 1955–2015 of 0.5% per annum.

The funding was provided by Marsden Fund.

In addition to the data series mentioned in the above table, detailed description on the compilation of the other data series is as follows:

Human capital is used as a proxy of human capital. This is given by the total government expenditure on education (including primary, secondary, tertiary, etc.) and salaries excluding capital expenditure.

We derived discount rates from the mean of bonds long-term series from Homer and Sylla (2005). We subtracted the percentage of GDP deflator from the bond percentage to get the real discount factor, which is 1.4% per year. We also use an alternative discount rate of 2.8% for sensitivity analysis.

GNS is calculated by subtracting public and private consumption from gross national income plus net exports.

It is the replacement value of capital used in the process of production and consumption. Pre-calculated data series for depreciation of fixed capital are given Stats NZ.

It is the difference between GNS and depreciation of fixed capita.

In our data set, the market value of all mineral resources is obtained from NZOYBs (1950–1993) and from the Mining Production Statistics annual publications by the Ministry of Business Innovation and Employment (2000–2015). Missing data between these periods are imputed from linear extrapolations.

Data for total labour employed in the mining sector and average annual wage in the mining industry are also compiled from NZOYBs and Stats NZ.

This is the difference between NNS and rents from natural capital (excluding forestry).

Data source: Labour and wages data from NZOYBs Stats NZ, estimated round wood removals from New Zealand forests from Ministry of Primary Industries, forest volume and volume per hectare from NFED and FOA.

It is given by the sum of Green series and rents from forestry.

The annual index of TFP is from Greasley and Madsen (2016, Eq. 1) using their preferred TFP (BDL) variant. Trend growth of these data for each year 1950–2015 is extracted using a Kalman filter and used to construct a measure of the value of technological progress. TFP series are compiled for GS, Green and Super Green series over 10, 15, 20 and 30 years horizons. For sensitivity analysis, we used the present value of future changes in TFP of aforementioned series with 1.4 and 2.8% per year discount rates to value technological progress, where the discount rates are matched with those for consumption and GDP per capita.

Net present values of consumption per capita, GDP per capita

Net present values for the future changes in real consumption per capita, real GDP per capita and TFP data series are estimated following Ferreira et al. (2008) over 10, 15, 20 and 30 years horizons with a 2.8% per year discount rate.

Summary of results with PV of change in GDP per capita at 2.8% discount rate

Summary of results with PV of change in consumption per capita at 2.8% discount rate

Log in to check access
Buy journal subscription
Get Access to
Environment, Development and Sustainability
for the whole of 2020
Rent this article via DeepDyve
Learn about institutional subscriptions