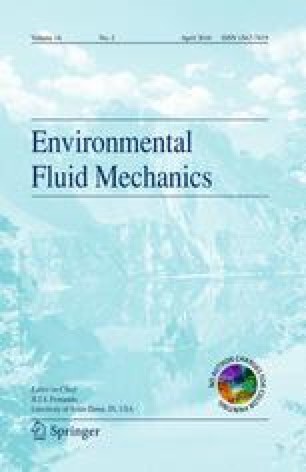 Growth and damping of interfacial waves on a diffuse interface

The resonant interaction of surface and internal waves produces a nonlinear mechanism for energy transfer among wave components in oceans, lakes, and estuaries. In many field situations, the stratification may be well approximated by a two-layer fluid with a diffuse interface. The growth and damping rates of sub-harmonic interfacial waves generated by a surface wave through a three-wave resonant interaction are measured in the laboratory. These measurements are compared with theoretical predictions. A diffuse interface reduces the damping rate and increases the growth rate. The predicted growth rate provides excellent comparison with the laboratory measurements. The inclusion of the effects of a diffuse interface significantly improve the comparison.

M. Fazeli and M. Jamali acknowledge the support for this work from Sharif University of Technology. G. Lawrence is grateful for the support of a Canada Research Chair. B. Seymour received funding from Natural Sciences and Engineering Research Council of Canada under Grant A9117.

Appendix: calculation of the damping rate

Here we derive the damping rate of a three-dimensional standing wave in a two-layer fluid from an energy balance argument. The calculations are presented for a sharp interface, and a correction added to include the effect of a diffuse interface. The Boussinesq approximation, \(\delta = \frac{\Delta \rho }{\rho } \ll 1\), is assumed in accordance with the experiments. As the wavelength of the standing wave in this interaction is proportional to \(\delta\) [11], the standing wave is a deep-water wave in both layers, and the approximation \({ \tanh }\left( {kd} \right) \approx { \tanh }\left( {kh} \right) \approx 1\) is used, where k is wave number of the standing wave and h and d are the depths of the upper and lower layers, respectively. Hence there is no boundary layer at the free surface and the bed. The energy dissipation is assumed to take place in the boundary layers at the interface and flume side walls.