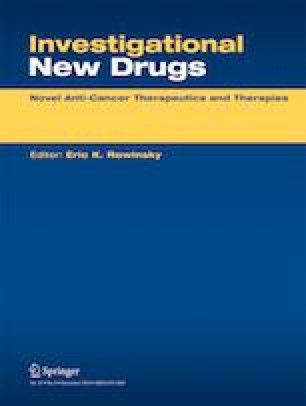 Effectiveness and safety of eribulin in Japanese patients with HER2-negative, advanced breast cancer: a 2-year post-marketing observational study in a real-world setting

Eribulin mesylate (Halaven®, Eisai Co. Ltd., Tokyo, Japan) is a non-taxane microtubule dynamics inhibitor that was approved for the treatment of advanced breast cancer in Japan in 2011. Eribulin exerts antitumor activity through a unique mechanism of action which is unlike that of other chemotherapeutic agents such as paclitaxel and docetaxel. Eribulin was granted global approval for patients as the third- or later-line treatment, mainly because of the prolonged overall survival (OS) result shown in a phase 3 EMBRACE study [5].

The efficacy and safety of eribulin as the first- or second-line treatment was not explored in randomized controlled trials. However, some clinical trials (mainly phase 2) and a real-world study reported the efficacy and safety of eribulin as a first- or second-line treatment [6, 7, 8, 9, 10, 11, 12, 13, 14, 15]. Jacot et al. reported the activities of eribulin among metastatic breast cancer patients in a multicenter national observational Epidemiological Strategy and Medical Economic (ESME) program in a real-world setting [14]. They concluded that patients with HER2-negative metastatic breast cancer who received eribulin as a second-, third-, or fourth-chemotherapy-line presented a significantly better progression-free survival and OS than those receiving other chemotherapy agents. However, no first-line treatment results were presented in these studies. Furthermore, the limitations of these studies were small number of patients and /or no OS results.

This was a multicenter, prospective, post-marketing, observational study conducted in Japan (ClinicalTrials.gov: NCT02371174). Patients were enrolled from September 2014 to February 2016 and followed-up for 2 years. Details of the study are available elsewhere [17].

Eisai Co., Ltd. reviewed the scientific and ethical validity of the study design. This study was conducted in accordance with the Declaration of Helsinki and Japanese Good Post-Marketing Study Practice (GPSP), an authorized standard for post-marketing surveillance. GPSP does not require approval from the institutional review boards of each institution or informed consent from the participating patients. However, in practice, some institutions may have obtained approval or informed consent when deemed necessary. Personal data related to this study were managed in compliance with the privacy protection laws in Japan.

Eribulin-naïve patients with HER2-negative inoperable or recurrent breast cancer who received eribulin as first/second-line or as third/later-line chemotherapy were recruited in each institution in approximately equal numbers (1:1 ratio). Pre- and post-operative chemotherapy, hormone therapy, antibody therapy, immunotherapy, and local radiation therapy were not included in “Previous chemotherapy regimens”. Exclusion criteria were patients with severe bone-marrow suppression defined as a neutrophil count of <1,000/mm3 or platelet count <75,000/mm3, patients with a history of hypersensitivity to the eribulin components, and pregnant or possibly pregnant patients.

Patients generally received eribulin intravenously at a dose of 1.4 mg/m2 over 2 to 5 min on day 1 (initiation of eribulin treatment; baseline) and day 8 of a 21-day cycle as indicated. For some patients (such as those with hepatic dysfunction), the starting dose of eribulin was reduced (1.1 mg/m2), depending on the patient’s condition to prevent toxicity.

Safety was assessed by adverse drug reactions (ADRs) and the number of patients who discontinued eribulin treatment due to ADRs. The severity of ADRs was assessed based on the Japanese version of the Common Terminology Criteria for Adverse Events (CTCAE), version 4.0. ADRs were classified according to the Japanese version of the Medical Dictionary for Regulatory Activities (version 21.1).

Patients were categorized by their use of eribulin into first-, second-, and third or later-line treatment. Baseline characteristics, eribulin treatment status, all grade ADRs, grade ≥ 3 ADRs, and the number of patients who discontinued eribulin due to ADRs were summarized descriptively. Using the Kaplan-Meier method, median OS and TTF (95% confidence interval [CI]) in months were estimated. The survival rate and percentage of patients who continued eribulin for 1 and 2 years were calculated.

In this prospective observational study, 651 patients were registered from 182 institutions, and of these, 637 patients were included in the safety and effectiveness analysis.

Multivariate Cox regression analysis was performed to identify the factors influencing TTF. The following factors were significantly associated with the reduced TTF: ≥1 ECOG PS, triple-negative, a history of radiotherapy, liver metastasis, complication of liver dysfunction, AST ≥32 IU/l at baseline, and hemoglobin <11.5 g/dl at baseline. The complication of diabetes and the development of peripheral neuropathy after eribulin treatment was associated with prolonged TTF (Fig. 1).

Common Terminology Criteria for Adverse Events (version 4.0) all grade adverse drug reactions (ADRs) occurring in ≥5% of the patients in all groups are summarized

Seventy (11.0%) patients discontinued eribulin treatment due to the ADRs. ADRs occurring in ≥1% of the patients that resulted in eribulin discontinuation were leukopenia (3.0%), neutropenia (2.8%), peripheral sensory neuropathy (2.4%), and malaise (1.3%).

The OS of 15.6 months was generally similar to those reported in a previous clinical trial (11.3–17.4 months) [10, 18, 19, 20]. Moreover, more prolonged OS such as 72.1 months [21] and 22.3 months [22] were reported in real-world studies than in this study. These differences in results may be explained by the differences in the patient’s background characteristics and study designs. One study evaluated OS in patients with estrogen receptor (ER)-positive, HER2-negative metastatic breast cancer in a single institution [21] while in another study, patients were enrolled since 2011 and followed-up until 2015 [22].

In the first-, second-, and third or later-treatment-line groups, OS was 22.8, 16.3, and 12.6 months, respectively. These results according to the treatment line status of eribulin were consistent with previous pre-approval and real-life studies. Previously reported OS results included 16.1 months [13] and 12.4 months [14] for first-line; 21.4 months [12] for the first- or second-line; 10.3 months [14] for the third-line; and 13.1 months [5] for the third or later-lines. However, the results of the phase 2 clinical trial in Japan, which included patients with HER2-negative breast cancer who used eribulin as a first-line treatment, showed a more prolonged OS (35.9 months) than the result of this study [9]. This difference might be attributable to the relatively small number of patients (35 patients) included in the phase 2 study [9]. One phase 3 trial reported similar OS as in this study which was more prolonged in patients using eribulin (16.1 months) than in patients using capecitabine (13.5 months) when these were used as second-line treatment with a manageable safety profile [13]. Another eribulin study in a clinical setting also illustrated a more prolonged OS in an eribulin monotherapy group (22.3 months) than in taxane monotherapy (13.2 months) and taxane plus bevacizumab (12.9 months) groups [22]. Owing to the absence of a comparator in this study, we could not directly compare the OS results by eribulin with other breast cancer drugs. However, because of the beneficial OS results by eribulin as indicated by previous studies, this might be expected in some breast cancer patients in a clinical setting, especially in the initial treatment lines. Indeed, further studies of eribulin, particularly as a first- or second-line treatment are required before drawing any conclusion. Such studies should compare the OS results of eribulin and other breast cancer drugs.

In this study, the complication of diabetes and the development of peripheral neuropathy after eribulin treatment were associated with prolonged TTF in multivariate Cox regression analysis. However, factors associated with reduced TTF included low hemoglobin levels at baseline (<11.5 g/dl). Interestingly, development of peripheral neuropathy after eribulin treatment was associated with prolonged TTF in this study. Additionally, a paclitaxel study demonstrated that early occurrence of peripheral neuropathy may be a positive prognostic indicator for TTF [24]. This paclitaxel study suggested that this may be explainable by the dose of paclitaxel, as occurrence of peripheral neuropathy is dependent on dose [24]. Therefore, the higher drug concentrations lead to higher incidence of neuropathy events as well as better efficacy [24]. This partly corroborates our study results that the first-line and second-line treatment groups were treated with relatively high start dose of eribulin (1.4 mg/m2), dose intensity, and relative dose intensity. In this study, low hemoglobin levels at baseline were associated with reduced TTF. Moreover, previous studies associated the low hemoglobin levels including anemia with poor survival prognosis in breast cancer patients [25, 26, 27, 28]. Thus, low hemoglobin levels may be a robust prognostic indicator for reduced TTF for breast cancer patients. Further investigation of factors affecting TTF by eribulin will advance breast cancer treatment.

Irrespective of the patients’ treatment line, the incidence of grade ≥ 3 ADRs did not largely differ, and hematologic events (neutropenia, leukopenia, and lymphopenia) were the most commonly observed grade ≥ 3 ADRs. The remaining ADRs had a relatively low incidence of <5.5%. Overall, approximately 10% of the patients discontinued eribulin due to ADRs. These findings are generally consistent with those of previous pre-approval and post-marketing studies. These included studies on eribulin as a first- or second-line treatment, although direct comparisons are limited by study design differences (e.g. the majority of the studies assessed eribulin safety by adverse events) [9, 10, 15, 16, 18, 19]. Hence, eribulin was well-tolerated, as shown in previous studies, although ADRs, such as the hematologic events, should be taken into consideration for eribulin administration, regardless of the patients’ eribulin treatment line status.

Guidelines in Japan recommend the sequential administration of a single agent to maintain or improve the QoL for metastatic or recurrent breast cancer except in extreme cases [29]. Since the goal of metastatic breast cancer treatment is to maintain or improve survival and QoL while alleviating adverse symptoms, a single agent that can address all of those is required. As discussed above, we confirmed a well-tolerated safety profile of eribulin in all groups, consistent with previous clinical and post-marketing studies. This study did not assess QoL. However, a previous eribulin study demonstrated that eribulin seemed to maintain health-related QoL in almost all the patients in the study [12]. Therefore, eribulin might represent another first-line treatment candidate for HER2-negative metastatic or recurrent breast cancer, similar to commonly selected drugs (anthracyclines and taxanes). Further studies on eribulin as first-line treatment to assess effectiveness, safety, and QoL in a real-life setting are warranted.

Interpretation of this study results may require careful consideration. First, we only assessed the effectiveness and safety of eribulin in patients with HER2-negative breast cancer. Therefore, our study results are not applicable to patients with HER2-positive breast cancer. Second, our OS results were limited to a maximum of 2-year follow-up. Thirdly, OS is generally affected by the post-treatment period after completion of chemotherapy and by the time taken to complete a previous clinical trial because new breast cancer treatments could have emerged. Thus, comparisons of OS results with that of previous clinical trials may be limited.

In conclusion, the effectiveness and safety results of eribulin as a first- or second-line treatment in a clinical setting were favorable and in line with previous pre-approval clinical and post-marketing study results. Therefore, these results suggest that eribulin may be an additional candidate for first-line treatment of patients with HER2-negative advanced breast cancer in Japan.

This study was funded by Eisai Co., Ltd.

Disclosure of potential conflicts of interest

Eisai Co., Ltd. reviewed the scientific and ethical validity of the study design. This study was conducted in accordance with the Declaration of Helsinki and Japanese Good Post-Marketing Study Practice (GPSP) which is an authorized standard for post-marketing surveillance. GPSP does not require approval from the institutional review boards of each institution. However, in practice, some institutions may have obtained approval when deemed necessary.