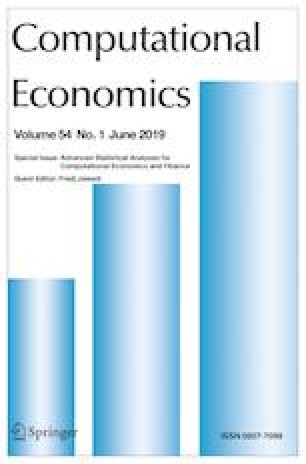 Agent-Based Modeling of a Non-tâtonnement Process for the Scarf Economy: The Role of Learning

In this paper, we propose a meta-learning model to hierarchically integrate individual learning and social learning schemes. This meta-learning model is incorporated into an agent-based model to show that Herbert Scarf’s famous counterexample on Walrasian stability can become stable in some cases under a non-tâtonnement process when both learning schemes are involved, a result previously obtained by Herbert Gintis. However, we find that the stability of the competitive equilibrium depends on how individuals learn—whether they are innovators (individual learners) or imitators (social learners), and their switching frequency (mobility) between the two. We show that this endogenous behavior, apart from the initial population of innovators, is mainly determined by the agents’ intensity of choice. This study grounds the Walrasian competitive equilibrium based on the view of a balanced resource allocation between exploitation and exploration. This balance, achieved through a meta-learning model, is shown to be underpinned by a behavioral/psychological characteristic.

We thank the two anonymous referees for their helpful and constructive comments, which have helped us greatly in improving the quality and clarity of the paper. The first and the last author are grateful for the research support in the form of the Ministry of Science and Technology (MOST) grants, MOST 103-2410-H-004-009-MY3 and MOST 104-2811-H-004-003, respectively. We thank Wolfgang Magerl for the able research assistantship in the execution of this project. 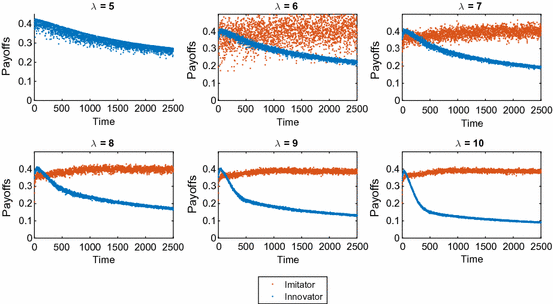 The details regarding the implementation of the simulations are provided in this “Appendix”. All simulations and analyses were performed using NetLogo 5.2.0 and Matlab R2015a. The NetLogo interface of our simulations is provided in Fig. 13. To comply with the current community norm, we have made the computer program available at the OPEN ABM.25 Figure 13 is the typical NetLogo operation interface. We classify the figure into two blocks. The first block (the left most block) is a list of control bars for users to supply the values of the control parameters to run the simulation. The parameters are detailed in Table 1, including N, M, S, T, \(\varphi \), \(\theta _{1}\), \(\theta _{2}\), K, \(\lambda \), \(\textit{POP}_{RE}\) (defined in Sect. 5.3), and \(\textit{POP}_{a_{il}}(0)\). In addition to these variables, other control bars are the on-off choices for the running model, including individual learning (only), social learning (only), an exogenously given market fraction, and the meta-learning model. For the exogenously given market fraction, \(\textit{POP}_{a_{il}}(0)\) needs to be given additionally.

On the left of the control panels are the real-time demonstrations of the economy under operation. The six subfigures shown in the upper right block are information related to price expectations sustained for a trading day (3) and excess demand and supply settled at the end of a trading day (10). The results are plotted in a time series. The leftmost three subfigures refer to the mean of price expectations (by good and by type), and the middle three subfigures refer to the mean of excess demand and supply (by good and by type).

In Sect. 5.8, we have seen that large populations of immobile agents associated with large \(\lambda \)s cause the market mechanism to malfunction due to both the possible presence of ‘type-I’ and ‘type-II’ errors. In this section, we shall have a further look at the relative importance of these two types of errors at the individual level by examining the payoffs to these two types of agents who may contribute to these errors. In Fig. 14, we present the results in parallel to Fig. 11 except that here we only restrict our attention to those innovators and imitators who are immobile. Since there is only a negligible number of immobile agents when \(\lambda < 5\) (Fig. 12, the left panel), we only report the payoffs of these two groups for \(\lambda \ge 5\) in Fig. 14.

As in Figs. 11 and 14 shows that, even for the immobile agents, the imitators’ performance is superior to that of the innovators. In fact, these two figures together show that the payoffs to innovators drop substantially with an increase in immobile agents, whereas the payoffs to imitators are not affected substantially by the prevalence of immobile agents. Therefore, despite our taxonomy of two types of errors, what contributes to the ‘malfunction’ of the market mechanism the most is the ‘type-one error’. This result demonstrates that the market mechanism is a joint function of exploration and exploitation. They help each other, but when one function is not working, exploitation alone can do more harm than exploration alone.

The above finding resonates well with what we have observed in Sect. 5.2, in which one economy has only exploitation (Sect. 5.2.1) and one economy has only exploration (Sect. 5.2.2). The reason why exploitation can do more harm than exploration alone is probably because it results in a lower spread of information and hence prevents markets from pooling information effectively. Nevertheless, we have also seen that the performance of innovators (exploitation) can be generally beefed up when learning from others is possible, i.e., being mobile agents. Indeed, when the market is filled with mobile agents (the case with low \(\lambda \)s), innovators on average perform better than imitators, as shown in Fig. 11 (the sub-figures with small \(\lambda \)s).

The above results also shed light on our earlier result that the presence of general-equilibirum agents does not automatically ensure that all agents will adopt equilibrium prices in our meta-learning model (Sect. 5.3). Why do these ‘superior’ price expectations fail to spread across the whole economy? The reason is due to the existence of immobile agents who not only block themselves away from the adoption of the ‘superior’ belief, but may generate lots of ‘noises’ to prevent others from copying it.