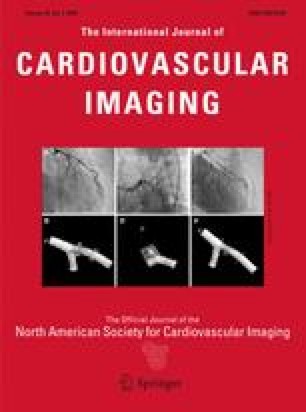 The movie demonstrates the optimization steps.

A 3D vessel model was reconstructed automatically from 2 conventional angiographic images using the interventional cardiac 3D system. The projection angle of the image of the reconstructed 3D vessel model is shown in the upper right portion of the movie. First of all, we rotated the model to elongate the ostial LAD and to maximize the bifurcation angle. RAO 58-caudal 46 was indicated in the upper right portion of the movie, however, the font color showing the angle turned red, as a result, this angle was not considered to be practical. We therefore rotated the vessel model to the possible angle range, while carefully avoiding any overlapping of the bifurcation and foreshortening of the LAD, as a result, an angle of RAO58-caudal 42 was thus obtained.