Diseases of the Colon & Rectum 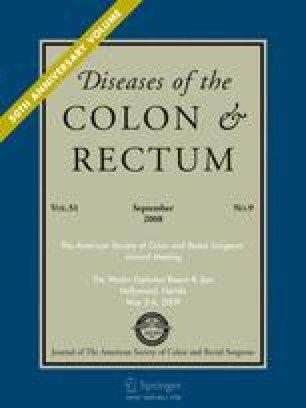 Diseases of the Colon & Rectum

A total of 44 patients (from January 2004 to February 2005) with middle rectal cancer (the average distance from anal verge was 7.8 cm, ranging from 5.0 to 10.0 cm) without preoperative chemoradiation therapy were selected to undergo laparoscopic total mesorectal excision. Before the study entry, all patients underwent pelvic magnetic resonance imaging or multislice spiral computed tomography to evaluate the circumferential resection margin of rectal cancer. Only patients whose circumferential resection margin was not involved by rectal cancer were considered as potentially curable by total mesorectal excision procedures and were enrolled for this study. The operation procedures were conducted according to the guidelines advocated by Heald et al.1 and were shown in the video. Posteriorly, the dissection was along the ‘holy plane’ downward to the level of levator ani muscle. Anteriorly, the dissection plane was at the anterior part of Denonvilliers fascia. Laterally, the lateral ligaments were sharply cauterized at the medial part. The resected bowel was reconstructed with stapled end-to-end anastomosis. The surgical outcomes of this procedure were prospectively evaluated.

The laparoscopic total mesorectal excision was performed with acceptable operation time (234.4±44.4 minutes, mean±standard deviation) and little blood loss (80.0±24.0 ml) through a small wound (5.0±0.5 cm). Histopathology showed that all patients were able to get adequate distal section margins (mean: 2.8 cm; range: 1.6–5.4 cm) and negative circumferential resection margins (mean: 8.4mm; range: 2–14 mm). The number of dissected lymph nodes was 16.0±4.0. The pathologic tumor–node–metastasis stages were as follows: Stage I: n= 4; Stage II: n = 22; Stage III: n = 18. Two patients (4.5 percent) were diverted by protective ileostomy. There was no mortality within 30 days after operation. However, anastomotic leakage occurred in 3 patients. The patients have quick functional recovery, as evaluated by the length of postoperative ileus (48.0±12.0 hours), hospitalization (9.0±1.0 days) and degree of postoperative pain (3.5±0.5, visual analog scale). Besides the expenses covered by the National Bureau of Health Insurance in Taiwan, the patient had to pay an extra expense of NT$ 65000.08000.0 (1.0US dollars = 32.0 NT$). During the follow-up periods (median: 14 months, range. 2 to 27 months), three patients of Stage III and 1 patient of Stage II developed a recurrent disease (lung metastasis: n = 2; liver metastasis: n = 1, and pelvic recurrence, n = 1).

By laparoscopic approach, the total mesorectal excision for rectal cancers can be safely performed with good functional recovery. However, with only a median follow-up of 14 months in this case series, the long-term oncologic outcomes for these patients remain a question. Further randomized prospective study is thus mandatory to provide solid evidence of this approach.

This multimedia article (video) has been published online and is available for viewing at http://www.springerlink.com. Its abstract is presented here. As a subscriber to Diseases of the Colon & Rectum you have access to our SpringerLink electronic service, including Online First.

Reprints are not available.

© The American Society of Colon and Rectal Surgeons 2006