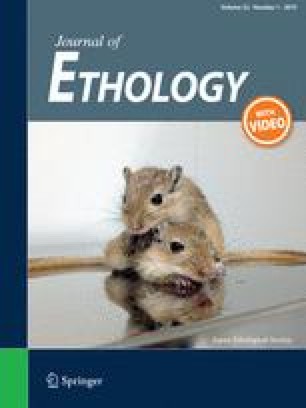 Tiger beetle larvae excavate and live in underground burrows, whose openings they sometimes plug with soil. This study documents the burrow plugging behavior of the tiger beetle, Cosmodela batesi (Fleutiaux), in the field. We also tested the function of burrow plugs in the laboratory. In the field, C. batesi more frequently made a plug when it rained. Most larvae made plugs inside their burrows (rather than at the soil surface), and the use of an endoscope was necessary to detect these sub-surface plugs. In the laboratory, flooding was simulated by artificially introducing water into specially-made arenas. Water filled the entire burrow when there was no plug, whereas plugged burrows maintained air chambers inside. When a plug was broken with a wire, burrows filled up with water. The burrowing and plugging behavior described in this study is likely an important adaptation of C. batesi to its habitat.

Flooding is a threat to terrestrial organisms (Baumgartl et al. 1994; Hochachka 1997; Hoback et al. 2000) and is particularly severe for animals that live underground and whose burrows can rapidly fill with water. To cope with flooding, burrowing organisms have developed a variety of strategies. For example, the rove beetle Bledius sp. plugs its burrow to prevent the entrance of water (Wyatt 1986), and some intertidal collembolans can survive flooding by trapping an air-bubble, which acts as a physical gill (Zinkler et al. 1999).

Many species of tiger beetle larvae burrow underground (Pearson 1988), and hence their homes are vulnerable to flooding. To survive flooding, tiger beetles that inhabit floodplains, such as Cicindela togata (Hoback et al. 1998) and Phaeoxantha klugii (Zerm and Adis 2003), have evolved physiological tolerance to anoxia, and can survive many days of immersion. Some species show behavioral adaptation; for example Cicindela hirticollis larvae abandon their burrows and relocate in response to flooding (Brust et al. 2006).

Burrow plugging (henceforth simply “plugging”) is another behavioral response, and is found in the larvae of some tiger beetles. For example, the coastal tiger beetle, Callytron inspecularis, plugs its burrow opening before submergence at high tide (Satoh et al. 2006; Satoh and Hayaishi 2007), which suggests that plugging is an adaptation to flooding. Similarly, several Cicindela larvae in saline habitats in the central United States plug their burrows when they detect moisture (Willis 1967). These examples demonstrate a relationship between plugging and water or moisture. However, there has not been any direct experimental evidence for the function of plugs.

C. batesi is a species of tiger beetle endemic to Taiwan. In their habitat, heavy rain leads to short-term flooding which can immerse their burrows. Larvae of C. batesi were collected from Fu-Chou Mountain near National Taiwan University, Taipei, Taiwan. The larval stage of C. batesi consists of three instars and is mainly seen on roads, trails, and forest openings (Putchkov et al. 2008). The first and second instars together last about 4 weeks, and the third instar lasts more than 6 months (Wu et al. 2006). All individuals used in this study were third instar larvae.

To facilitate field observations, third instar larvae were translocated from the collection site to a field behind an entomology building at National Taiwan University. C. batesi is naturally present around the building although at a lower density than at the mountain site. The vegetation was cleared from a patch (40 × 30 cm2) of land; then larvae were introduced to the patch and were allowed to make burrows for 3 days before observations started. Fourteen larvae were observed daily for four consecutive days. Preliminary investigations revealed that a plug can be present inside a burrow. Larval burrows were checked for the presence or absence of a plug each day at 1000 and 1600 hours. An endoscope with a 3.9-mm-diameter lens (TD-S1205; Tonder Lock Industrial, Taichung, Taiwan) was used to examine the insides of burrows for possible plugs. When short-duration rainfall occurred between 1000 and 1600 hours, additional observations were taken after those rain events. Overall, we made 10 observations of each individual in the 4 days of field observation. Six of these ten observations per individual were associated with rain events (i.e., a rainfall occurred within 1 h prior to or during the observation).

The effect of rain on the probability of making a plug was analyzed using generalized linear mixed models (GLMMs) with binomial error distribution. The explanatory variable was the presence or absence of rain (a qualitative variable). The random intercept parameter was used to account for the repeated measure design (Zuur et al. 2009).

Field observations indicated that tiger beetle larvae make plugs inside their burrows, and rainfall induces plugging behavior (see “Results”). We followed this up with laboratory experiments to study the function of burrow plugs.

Larvae that were used in the laboratory experiments were housed individually and were allowed to make burrows in experimental arenas. A three-dimensional arena was made out of two 200 × 40 mm parallel acrylic plates fixed 5.5 mm apart. Soil was filled in the gap between the plates, and any burrows made in the soil could then be easily observed. In addition, at the top of the arena, a cylinder (30 mm diameter and 15 mm height) filled with soil was attached. Thus, the total arena height was 215 mm. The cylinder attachment was used to increase the arena volume near the surface to accommodate the wider burrow entrances (personal observation). Two sides and the bottom of the arena were covered by a layer of non-woven cloth for facilitating water movement into the soil arena (see below for details). Larvae were housed individually in independent arenas. All larvae were given at least 3 days to construct a burrow before experimental testing. All experiments were conducted in a black box with only one window for a video camera because tiger beetle larvae are sensitive to visual cues (Gilbert 1989).

This experiment had the same purpose as the previous experiment but directly examined the function of plugs. The experimental procedure was the same as in the previous experiment with a few modifications. First, before increasing the water level, we induced the plugging behavior by introducing water from the soil surface. This was done because, in Experiment 1, some larvae did not appear to notice the water invasion and did not make plugs, especially when they positioned themselves near the surface (see “Results”). Introducing water from the surface appeared to induce the plugging more effectively. After a larva made a plug, the arena was placed in an aquarium, and the water level was raised in the way described above. When the surrounding water level (i.e., water level in the soil) increased to the height of the plug, the plug was broken using an iron wire. The water level inside the burrow before and after the plug destruction was recorded. Six larvae were tested in this experiment.

Of the 20 larvae examined, 10 larvae made plugs and 10 did not. When a larva did not make a plug, its burrow was completely filled with water at the end of the trial (Fig. 2a), in which case the larva stayed at the burrow surface with a part of its body submerged. In burrows with plugs, the water level inside stopped increasing while the surrounding water level kept increasing (Fig. 2b). The burrow below the plug maintained an air pocket even when the burrow above the plug filled up with water (Fig. 3). Although most plugs (n = 7) successfully prevented water invasion, in three cases water filled the burrow despite the presence of a plug. Water prevention success (0/10 without a plug and 7/10 with a plug) was significantly different between the groups (Fisher’s exact test, P = 0.003).

All burrows initially maintained an air pocket; but after a plug was broken, the air pocket filled up with water on all occasions. In other words, plugs prevented water invasion (binomial test, P = 0.03).

That plug making behavior exists in tiger beetle larvae is well known; however, little attention has been given to its function and description. This study revealed two new aspects of the plugging behavior. First, we documented that tiger beetle larvae commonly make plugs deep inside their burrows. Second, we demonstrated that plugs maintain air chambers inside the burrows even when the entire burrows are submerged in water.

Given that previous studies only reported that plugs are made at the burrow openings, the common notion about its function was to prevent the water entering from the openings. This study demonstrated that the burrow plug is effective for creating an air chamber even when the ground is saturated with water. In other words, plugs also prevent water coming inside a burrow from the surrounding walls. Air chamber formation is also found in other burrowing organisms, such as rove beetles (Wyatt 1986), ants (Yensen et al. 1980), and fiddler crabs (Dembowski 1926; Delaiglesia et al. 1994), suggesting that this function of plugs may be widespread.

There is a substantial variation in the plug position (i.e., depth within the burrow). Plugs were placed on the surface or below; and when placed below, their depth was highly variable. One possible function for creating a plug below the surface may be antipredatory, since a plug at the soil surface may make the larva conspicuous to natural enemies.

In the field, some burrows were plugged even when no rainfall had recently taken place. This may be because soil moisture remained high from a previous rain event even when it had not been raining for hours when observations were made. However, factors other than water are also known to induce the plugging behavior in tiger beetles. For example, several species of Cicindela larvae plug their burrows at various times, e.g., after feeding, in hot weather, and before hibernation, estivation, or molting (Willis 1967). C. batesi larvae also plug their burrows prior to pupation (personal observation). Other arthropods may perform plugging or blocking behavior for purposes other than water prevention, such as for shutting out natural enemies in Cephalotes ants (Powell 2008), and, in ambrosia beetles, for preventing larvae from accidentally crawling out (Biedermann and Taborsky 2011). Therefore, although water may be a primary factor that induces plugging behavior in C. batesi, the effect of other factors requires further investigation.

There are three distinct strategies that allow tiger beetle larvae to deal with flooding: (1) physiological tolerance to anoxia, (2) moving out from flooding sites (i.e., relocation), and (3) burrow plugging. The degree of flooding largely explains which strategy may evolve. For example, species that inhabit places that experience prolonged flooding events are more likely to exhibit physiological tolerance (Zerm and Adis 2003) or relocation (Brust et al. 2006), presumably because plugging would not be sufficient over a long time. In locations that experience only short-term flooding caused by periodical rain, plugging in response to high soil moisture would be sufficient for the larvae to protect themselves against asphyxiation. Although C. batesi cannot sustain itself inside water for more than a few days (unpublished data), the plugging behavior described in this study is sufficient for individuals of this species to survive small scale flooding events (mainly rainfall, as opposed to, e.g., stream level rise).

In conclusion, our results are consistent with plugging behavior of C. batesi being an adaptation against flooding. Although we examined only one species, the same behavior may also be present in other species of tiger beetle larvae as well as in other burrow-making animals. Tiger beetles are considered an important indicator group for monitoring biodiversity and habitat degradation (Pearson and Cassola 1992; Hudgins et al. 2011; Marcelo 2013). The burrowing and plugging behavior is an important adaptation of tiger beetles to their habitats. Better understanding of tiger beetle ecology and behavior is essential to infer environmental changes using these beetles.

The manuscript greatly benefited from comments from Suhel Quader, two anonymous reviewers, and the handling editor. This study was supported by the National Science Council of Taiwan through research grants 99-2628-B-002-051-MY3 and 102-2311-B-002-038-MY3.