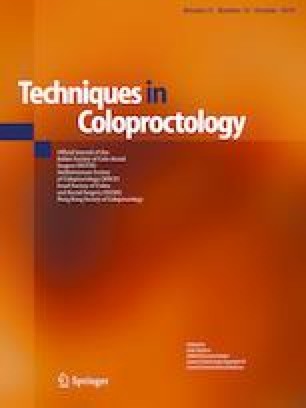 The third arm: the surgeon’s friend in the management of intraoperative complications in robotic-assisted rectal surgery

Different studies have shown that robotic-assisted rectal surgery compared to traditional laparoscopic surgery is associated with less blood loss and a better preservation of the pelvic autonomic nerves that is fundamental in rectal surgery to avoid anterior resection syndrome [1, 2].

Advantages of robotic technology should facilitate rectal cancer resection and some authors have demonstrated that conversion rates from robotic to open surgery, especially in low anterior resection, are lower than from laparoscopic to open surgery [3].

Therefore, robotic-assisted surgery is gaining popularity in the treatment of rectal cancer.

The attached online video shows a case of rectal cancer treated with a robotic approach, in which acute bleeding from the inferior mesenteric artery (IMA) occurred.

With the help of the third robotic arm, the bleeding was temporarily stopped, making it possible for the procedure to continue without any necessity of conversion. Moreover, the surgeon could go on using the other instruments without any discomfort.

After the dissection of the vascular plane along the IMA, and correct lymphadenectomy, the IMA could be clipped at its origin, definitively stopping the bleeding.

The intervention was completed without conversion and the patient was discharged on the 4th postoperative day without any complications.

MM: conception and design of the article; MM, MG, and SA: acquisition of the data; GDDeP: critical revisions and final approval.

Ethical approval is not required.

Written informed consent for publication of his clinical images was obtained by the patient.