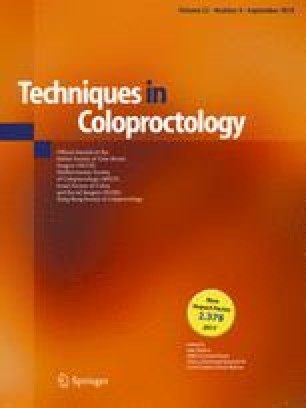 To our knowledge no cases of transanal minimally invasive surgery (TAMIS) combined with retroperitoneal laparoscopy for resection of lymph node recurrence have been described in the literature.

We report a case of resection of mesorectal and para-aortic lymph node recurrence of primary ovarian cancer performed with retroperitoneal laparoscopy and TAMIS.

After a multidisciplinary session, both nodes were resected (see attached video). The para-aortic node was resected using retroperitoneal laparoscopy and the mesorectal node resected using a TAMIS approach [1, 2, 3]. The postoperative course was uneventful and the patient was discharged 5 days after surgery. Histopathological examination of the two nodes revealed undifferentiated serosal adenocarcinoma of the ovary. No recurrence was found at 1-year follow-up.

Combination of different minimally invasive approaches is a safe alternative to conventional surgery for resection of lymph node recurrence that surgeons should be aware of.

All participants provided informed consent prior to their participation.